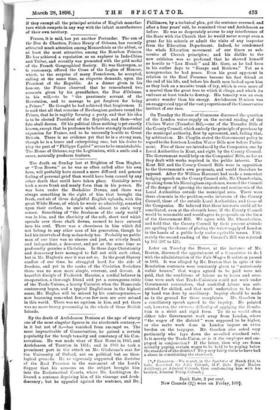 The death on Sunday last at Brighton of Tom Hughes,

-or "Tom Brown" as he was so often called after his own hero, will probably have caused a more diffused and general feeling of personal grief than would have been caused by any other death that could have taken place. Geniality never took a more frank and manly form than in his person. He was born under the Berkshire Downs, and there was always something in the sight of him that brought the fresh, cool air of those delightful English uplands, with the great White Horse, of which he wrote so admirably, scrawled 'upon their surface, to one's mind, almost to one's very senses. Something of "the freshness of the early world" was in him, and the elasticity of the soft, short turf which spreads over those chalk downs, seemed to have entered into his soul. There was a cheeriness in him which did not belong to any other man of his generation, though he had his intervals of deep melancholy too. Probably no public man of our time was so sincere and just, so utterly frank and independent, a democrat, and yet at the same time so profoundly genuine a Christian. In these days Christianity and democracy have managed to fall out with each other, but in Mr. Hughes's case it was not so. In the great Slavery -conflict of our time, he struggled hard for the side of freedom, and yet in the ranks of the Christian Socialists there was no man more simple, reverent, and devout. A heartfelt disciple of Frederick Maurice, a cordial believer in -co-operation, a thorough friend and yet a courageous critic of the Trade-Unions, a hearty Unionist when the Home-rule controversy began, and a typical Englishman in the highest sense, Mr. Hughes will be missed by his contemporaries,— now becoming somewhat few,—as few men are ever missed in this world. There was no egotism in him, and yet there was no more breezy personality in the whole of these British Islands.