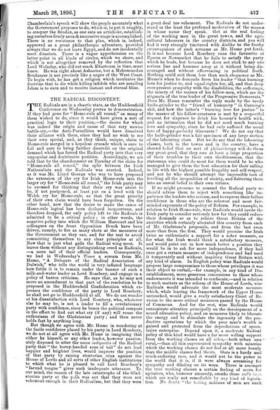 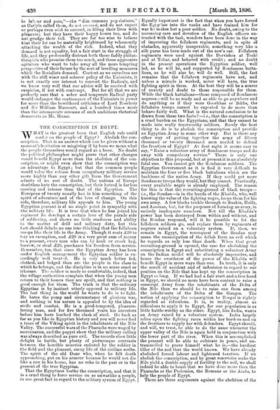 THE Radicals are in a chaotic state, as the Huddersfield Conference on Wednesday proves to demonstration. If they had gone for "Home-rule all round," as many of them wished to do, since it would have given a sort of practical logic to their position,—the desire for which was indeed the origin and cause of that very unwise battle-cry,—the Anti-Parnellites would have dissolved their alliance with them, since they had no wish to see their own special, and, as they think, unique, claim to Home-rule merged in a hopeless crusade which is sure to fail and sure to bring further discredit on the original demand which has forced the Radical party into that very unpopular and doctrinaire position. Accordingly, we are told that by the abandonment on Tuesday of the claim for "Home-rule all round," the split between the Irish Nationalists and the Radicals was averted. Indeed, as it was Mr. Lloyd George who was to have proposed the extension of the cry for Irish Home-rule into the larger cry for "Home-rule all round," the Irish party may be excused for thinking that their cry was about to be, if not postponed, at least put on a level with the Welsh cry for Home-rule, so that the great priority of their own claim would have been forgotten. On the other hand, now that the desire to make the cause of Home-rule logical has been declared inopportune, and therefore dropped, the only policy left to the Radicals is admitted to be a critical policy ; in other words, the negative policy into which Sir William Harcourt and his colleagues on the front Opposition Bench have been driven, namely, to fire as many shots at the measures of the Government as they can, and for the rest to avoid committing themselves to any clear principles at all. Now that is just what galls the Radical wing most. It leaves them without any distinguishing creed as Radicals, —a mere tail of their official leaders. Consequently, we had in Wednesday's Times a scream from Mr. Hume, "A Delegate of the Radical Association of Dulwich," who tells the world in very inflated language how futile it is to remain under the banner of such a milk-and-water leader as Lord Rosebery, and engage in a policy of barren criticism. He says that, as he may not move an amendment to that part of the resolution to be proposed in the Huddersfield Confederation which ex- presses the confidence of the party in Lord Rosebery, he shall not go to Huddersfield at all. We do not wonder at his dissatisfaction with Lord Rosebery, who, whatever else he may be, is not a leader to fill a revolutionary party with confidence, since he boxes the political compass in the effort to find out what cry (if any) will rouse the enthusiasm of the Gladstonian party ; and then never holds fast by anything long. But though we agree with Mr. Hume in wondering at the facile confidence placed by his party in Lord Rosebery, we do not at all agree with Mr. Hume in imagining that either he himself, or any other leader, however passion- ately disposed to utter the mesa indignatio of the Radical party that "the horny-handed sons of toil" do not lead happier and brighter lives, would improve the position of that party by raising stentorian cries against the House of Lords and all sorts of other English institutions to which what he is pleased to call Lord Rosebery's "fecund tongue" gives such inadequate utterance. To our mind, the reason of the late catastrophe of the Glad- stonian party at the pulls was not that they were not vehement enough in their Radicalism, but that they were a great deal too vehement. The Radicals do not under- stand in the least the profound moderation of the masses. in whose name they speak. Get at the real feeling of the working men in the great towns, and the agri- cultural labourers in the country districts, and you will find it very strongly tinctured with dislike to the frothy extravagances of such screams as Mr. Hume put forth. It is not because Lord Rosebery runs the favourite at Epsom or Newmarket that he fails to satisfy the party which he leads, but because he does not stick to any one serious line and hammer away at it without being dis- couraged and without effervescing in political froth. Nothing could suit them less than such eloquence as Mr. Hume's when he demands from his leader "that burning. love for justice to, and equal rights for, all, and that deep ever-present sympathy with the disabilities, the sufferings,_ the misery of the masses of his fellow-men, which are the stigmata of the true leader of the Progressive Democrats." Does Mr. Hume remember the reply made by the needy knife-grinder to the "friend of humanity" in Canning's .

skit, and how the latter's "burning love for justice" to the masses of his fellow-creatures is met by a respectful request for sixpence to drink his honour's health with,, and an intimation that he did not need much burning love and sympathy, since he had only suffered the usual fate of happy-go-lucky itinerants ? We do not say that the knife-grinder was a fair specimen of any large section.- of the labouring class. But we do say that the labouring classes, both in the towns and in the country, have a shrewd belief that no sort of philanthropy wilt do them any great good, that they owe at least a large proportion of their troubles to their own thriftlessness, that the statesman who could do most for them weuld be he who managed to give them the best education for their calling in life with the highest possible frugality and self-respect, and not he who should attempt the impossible task of levelling all the inequalities of society, and flattering them into an unreal belief in their own virtues.

If we might presume to counsel the Radical party we should advise them to reject with something like im- patience the leaders who scream, and to express their fullest, confidence in those who are the soberest and most fair- minded exponents of the policy of Reform. For example, in relation to Irish Home-rule, wise Radicals would invite the Irish party to consider seriously how far they could reduce their demands so as to relieve Great Britain of the anxieties which certainly alienated this country from each of Mr. Gladstone's proposals, and from the last even more than from the first. They would promise the Irish twice as enthusiastic a support for a sober measure, as for what the Irish would think a satisfactory measure, and would point out in how much better a position they would be in to ask for more independence, if they had once got a certain measure of independence and had used it temperately and without inspiring Great Britain with any kind of alarm. In English policy wise Radicals would propose large compromises to those whose privileges it was their object to curtail,—for example, in any kind of Dis- establishment, more generous concessions to those whose- endowments it was intended to confiscate,—and in relation to such matters as the reform of the House of Lords, wise Radicals would advocate the most moderate measure which, while leaving the framework of the Upper House untouched, would give a really satisfactory Court of Re- vision to the more critical measures passed by the House of Commons. And for the rest, wise Radicals viould concentrate attention principally on the development of a sound education policy, and on measures likely to liberate the energy and to stimulate the ingenuity of the pro- ductive operations by which the poor man's wealth is gained and protected from the depredations of specu- lative enterprise. Depend upon it, a moderate Radical policy of this kind would have a far more willing support from the working classes on all sides,—both urban and-- rural,—than all this superheated sympathy with miseries which the working classes do not feel at all more keenly than the middle classes feel theirs. Ours is a hardy and- much-enduring race, and it would not be the power in the world that it is, if it were always screaming for sympathy and dilating on its woes. There is amongst the true working classes a certain feeling of scorn for agitators, who, however sincerely, overdo those Buffo in4,4 which are really not remediable by any kind of legisla- tion. No doubt "the toiling millions of men are sunk in lab )ur and pain,"—the "dim common pop alations," as Carlyle called them, do not succeed, and do not expect or perhaps even wish to succeed, in filling their lives with pleasure; but they have their happy hours too, and do not grudge their toil. They are far too wise to believe that their lot can be materially brightened by vehemently attacking the wealth of the rich. Indeed, what they demand is not equality, but a fair start in the struggle of life, and they profoundly distrust both those faddy philan- t hropists who promise them too much, and those aggressive agitators who want to take away all the more tempting perspective of their future by the sort of levelling measures which the Socialists demand. Content as we ourselves are with the still wiser and soberer policy of the Unionists, it is not exactly our interest to convert the Radicals, and we know very well that our advice will be received with suspicion, if not with contempt. But for all that we are perfectly sure that a sober and temperate Radical party would endanger the continuance of the Unionists in power far more than the bewildered criticisms of Lord Rosebery and Sir William Harcourt, and a hundred times more than the intemperate screams of such ambitious rhetorical -democrats as Mr. Hume.