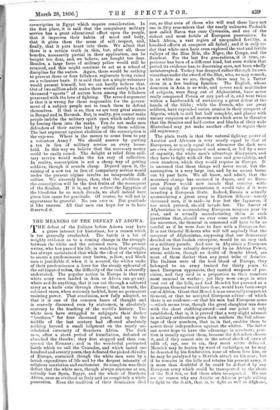 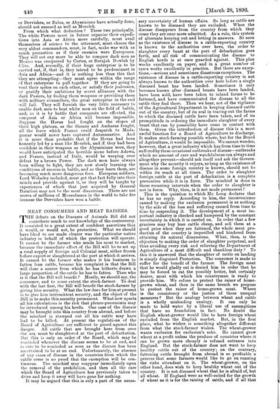 THE MEANING OF THE DEFEAT AT ADOWA. T HE defeat of

the Italians before Adowa may have a grave interest for historians, for a reason which is too generally overlooked. The battle is a bit of weighty evidence as to a coming change in the struggle between the white and the coloured races. The present writer, who has passed his life in watching that struggle, has always maintained that while the effort of the whites to secure a predominance over brown, yellow, and black men is justifiable if, when it is secured, the whites make of their predominance a lever for the steady upheaval of the subjugated tribes, the difficulty of the task is absurdly underrated. The popular notion in Europe is that any white army once landed in Asia or Africa can go any- where and do anything, that it can cut through a coloured army as a knife cuts through cheese ; that, in truth, the coloured races, when seriously tackled, have no permanent resisting power. That conclusion, now fully adopted, so that it is one of the common bases of thought and is scarcely discussed even by statesmen, is absolutely contrary to the teaching of the world's history. The white men have struggled to subjugate their darker "brethren" for four thousand years, and up to the middle of the last century had effected absolutely nothing beyond a small lodgment on the nearly un- inhabited extremity of Southern Africa. The dark men, after a short period of humiliation, defeated or absorbed the Greeks ; they first stopped and then con- quered the Romans ; and in the wonderful protracted battle which we call the Crusades, and which lasted one hundred and seventy years, they defeated the picked chivalry of Europe, sustained though the white men were by a lavish expenditure of life and by the deepest intensity of religious conviction and excitement. So complete was their defeat that the white men, though always supreme at sea, actually lost Syria, Egypt, and the whole of Northern Africa, once as civilised as Italy and as completely a white possession. Even the tradition of their dominance died out, so that even of those who will read these lines not one in fifty remembers that the nearly unknown Pashalik now called Berea was once Cyrenaica, and one of the, richest and most fertile of European possessions. In black Africa, a vast region of unequalled fertility, a hundred efforts at conquest all failed ; and it is only to- day that white men have even explored the vast and fertile valleys of the Blue Nile, the Niger, the Congo, and the Zambesi. For the last five generations, it is true, ex- perience has been of a different kind, but even within that- period its evidence has, to discerning eyes, not been wholly, uninterrupted. Turkey has decayed rather through its owa, vices than under the sword of the Slav, who, we may remark, is as white as we are, though there may be a Tartar cross in a few leading families. The English, whose dominion in Asia is so wide, and covers such multitudes of subjects, were flung out of Afghanistan, have never really conquered Persia or any part of it., and were twice- within a hairbreadth of sustaining a great defeat at the hands of the Sikhs ; while the French, who are great soldiers, have expended entire armies in their conquest of Algeria, which is still but half complete, and glance with uneasy suspicion at all movements which seem to threaten that the Semites and half-castes and blacks of their wide Hinterland may yet make another effort to regain their old supremacy.

The plain truth is that the natural fighting power of Asiatics and Africans is very nearly equal to that of Europeans, so nearly equal that whenever the dark men are even decently organised and armed, or led by a man of capacity, the white men's advantage disappears, and they have to fight with all the care and generalship, and even numbers, which they would require in Europe. It is assumed that these things will never occur, but the assumption is a very large one, and by no means borne' out by past facts. We all know, and admit, that the- necessary change has occurred in Japan, and no Euro- pean Power would now invade that country with- out taking all the precautions it would take if it were invading a European State. Indeed, Russia is actually accumulating a great army in Eastern Siberia—ninety thousand men, it is said—in fear lest the Japanese, if too much pressed, should invade her. The Ameer of Afghanistan is accumulating European weapons year by year, and is actually manufacturing them in such quantities that, should we ever come into conflict with, his successor, the General in command will have to be as careful as if he were face to face with a European foe.. It is not General Roberta who will tell anybody that the- conquest of Afghanistan, supposing that our democracy decided on that foolish enterprise, would be an easy task- or a military parade. And now in Abyssinia a European army has been actually destroyed by an African Power, whose soldiers, though no doubt of Semite blood, are most of them darker than any great tribe of Asiatics. The Italians were of the best blood of Europe, they belonged to an army trained for thirty years to meet European opponents, they carried weapons of pre- cision, and they died in a proportion to their numbers most unusual in warfare; yet they were swept in utter rout out of the hills, and had Menelek but pursued as a European General would have done, would have been swept out of Africa. Grant that Menelek is an unusually competent General, or that he accepted European advice—of which there is no evidence—or that his men had European arms —which seems true, though the great slaughter was done with the short stabbing-sword—and our point is only established, that is, it is proved that a very slight advance in military civilisation gives dark soldiers the full advan- tage of their numbers, that is, in fact, enables them to assert their independence against the whites. The latter can never hope to have the advantage in numbers ; posi- tion is usually against them, because the deft nders choose it, and if they cannot win in the actual shock of arms at odds of, say, one to six, they must retire defeeed. Menelek may be beaten by want of cartridges, or he may be deserted by his feudatories, none of whom love him, or he may be paralysed by a Dervish attack on his rear ; but if he remains in the hills and retains his present army, it is more than doubtful if he could be defeated by any European army which could be transported to the shore of the Red Sea, or fed there when transporttcl. We can- see no reason why any Asiatic or Afrieux people willing to fight to the death, that is, to fight as well as Afghans„. ior Dervishes, or Zulus, or Abyssinians have actually done, should not succeed as well as Menelek.

From which what deduction ? These two principally. 'The white Powers must in future organise their expedi- tions into Asia or Africa more carefully, must avail themselves of science to the uttermost, must choose the -very ablest commanders, must, in fact, make war with as -much precaution as if their enemies were Europeans. They will not any more be able to conquer dark men as Mexico was conquered by Cortes, or Surajah Dowlah by Clive. And, secondly, if their huge enterprise is to be carried out, if, that is, they intend to be predominant in Asia and Africa—and it is nothing less than this that -they are attempting—they must agree within the range of that enterprise to pull together. If they are going to -vent their spites on each other, or satisfy their jealousies, or gratify their ambitions by secret alliances with the dark Powers, by finding them weapons or providing them -with military counsellors, the great enterprise in the end -will fail. They will furnish the very little necessary to enable dark men to beat white men on the field of battle, and, as it is by battle that conquests are effected, the conquest of Asia or Africa will become impossible. Suppose the novas had fought on the slopes of -their high plateau, as the Shoans and Amharas fought, all the force which France could despatch to Mada- gascar would never have captured Antananarivo. And ,it is more than probable that if the Hovas had been honestly led by a man like Menelek, and if they had been confident in their weapons as the Abyssinians were, they would have anticipated the horrible scene before Adowa, and France, instead of Italy, would be weeping over defeat by a brown Power. The dark men have always been willing to fight, they are now slowly learning the conditions of success in battle, and as they learn them, are • becoming much more dangerous foes. European soldiers, Lord Wolseley included, must get that fact fully into their minds and provide against it, or they will be taught by experiences of which that just acquired by General Baratieri may not be the most disastrous. There are not scores of millions of Mussulmans in the world to take fire • because the Dervishes have won a battle.