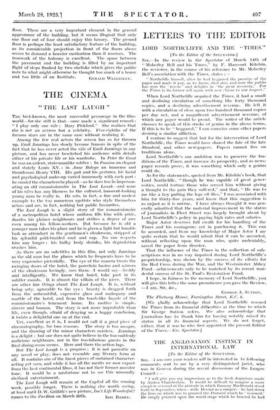 THE best-known, the most successful personage in the film- world—for she still is that—once made a significant remark : " I play only one role : Mary Pickford." She realizes that she is not an actress but a celebrity. Five-eighths of the famous stars are in the same case without realizing it.

Among the few real actors the screen has so far thrown up, Emil Jannings has slowly become famous in spite of the fact that he has never acted the role of Emil Jannings in any picture, and has never bewitched his audience with details either of his private life or his wardrobe. In Peter the Great he was an ardent, statesmanlike soldier : In Passion an elegant and stately Louis XV. : in Anne Boleyn an immense and thunderous Henry VIII. His gait and his gestures, his facial and psychological make-up varied immensely with each part : he created the characters he played—as he does too in imperson- ating an old commissionaire in The Last Laugh—and none of his roles has any likeness to the cultured, innocent-looking young man he really is. He sets, in fact, a fine and modest example to the too numerous egotists who style themselves actors and are, in fact, nothing but public favourites.

The Last Laugh is a slight story of the commissionaire of a metropolitan hotel whose uniform fills him with pride, dazzles his plainer neighbours and strikes a degree of awe even among his fellow-workers. But because he is old a younger man takes his place and he is given a light but humble task as attendant in the gentlemen's cloakroom, stripped of his splendid gold-braided coat and cap. No one respects him any longer : his bulky body shrinks, his degradation crushes him.

As there are no sub-titles in this film, not only Jannings as the old man but the places which he frequents have to be very expressive pictorially. The eye of the camera treats the swinging doors of the hotel, the porcelain basins and mirrors of the cloakroom lovingly, sees them—I would say— freshly and intelligently. We know that hotel, take part in its subtler moods. It is almost the villain of the piece. There are other fine things about The Last Laugh. It is, without being arty, agreeable to the eye : beauty is dragged forth from the unbeautiful, expensive glass and mahogany and marble of the hotel, and from the tomb-like facade of the commissionaire's tenement home. Its motive is simple. sincere and human. The story is not more improbable than life, even though, afraid of denying us a happy conclusion, it twists a delightful one on at the end.

Yet, excellent as it is, I would not call it a great piece of cinematography, for two reasons. The story is too meagre, and the drawing of the minor characters careless. Jannings is a delight : but one does not quite believe in the too-suddenly malicious neighbours, nor in the too-hilarious guests in the final dining-room scenes. Here and there the action lags.

But The Last Laugh is a progress : it is not parasitic on any novel or play, does not resemble any literary form at all. It contains one of the finest pieces of sustained character- acting vet seen, and while it has all the merits we now expect from the best continental films, it has not their former macabre tone. It would be a misfortune not to sec this unusually civilized entertainment.

The Last Laugh will remain at the Capitol all the coming week, possibly longer. There is nothing else worth seeing, at least until D. W. Griffith's new picture, Isn't Life Wonderful?