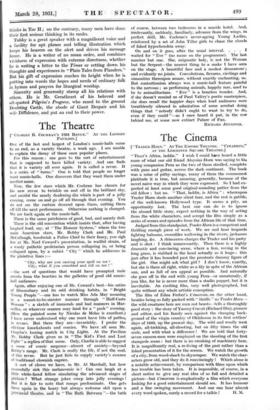 [- TRADER HORN." AT THE EMPIRE THEATRE. " CIMARRON'," AT THE LEICESTER SQUARE THEATRE.]

"THAT'S Africa, laddie." I wish I could have heard a little more of what our old friend Aloy-sius Horn was saying to his young companion Peru as the two of them strolled, complete with guns and guitar, across the dark continent. The book was a mine of pithy sayings, many of them the commonest platitude it is true, but amusing, generally, because of the novel naive way in which they were expressed. So I had ex- pected at least some good original-sounding patter from the old fellow : but no. "That, laddie, is Africa " : whereupon Trader Horn sheds another silent tear, and the rest is gabble, of the well-known Hollywood type. It seems a pity, an opportunity lost. The best one can do is to ignore the absurd little story, expect nothing in the way of acting from the white characters, and accept the film. simply as a series of scenes and episodes from the African life of that time.

Judged from this standpoint, Trader Horn is a competent and thrilling enough piece of work. We see and hear leopards fighting baboons, crocodiles wallowing in the rivers, jackasses laughing, &c. A rhinoceros charges the Trader and his party and is shot : I think unnecessarily. Then there is a highly dramatic and convincing scene, where a lion, roving in the long grass, is stabbed in the head actually as it leaps : this just after it has bounded past the prostrate dummy figure of the girl. One might ask what girl ? I don't know, exactly, but she is there all right, white as a lily in spite of the African sun, and as full of sex appeal as possible. And naturally she goes off in the end with young Peru—or unnaturally, if you like, for he is never more than a studio puppet, but it is inevitable. An exciting film, very well photographed, but quite without any whole artistic conception.

The film of Edna Ferber's Cimarron, on the other hand, besides being as fully packed with " thrills " as Trader Horn the wild creatures here are men not beasts—tells a thoroughly good story : the story of Yancey Cravat (Richard Dix), pioneer and editor, and his family seen against the changing back- ground of the virgin country of Oklahoma in its first settlers' days of 1889, up the present day. The wild and woolly west again, all-trekking, all-shooting, but on fifty times the old scale, and with what a difference ! We are told that forty- seven camera-men were employed on the shooting of the first stampede scene : but there is no creaking of machinery here. It is magnificently real, a re-living of the past rather than a faked presentation of it for the screen. We watch the growth of a city, from wood-shack to skyscraper. We watch the char- acters grow old, and they do it convincingly ! Which alone is a notable achievement, by comparison with films upon which less trouble has been taken. It is impossible, of course, in a short notice to give any real idea of so full and detailed a picture—but Cimarron is emphatically a film which everyone looking for a good entertainment should see. It has humour and a fine swinging movement. And one can hear almost •

every word spoken, surely a record for a talkie ! H. M.