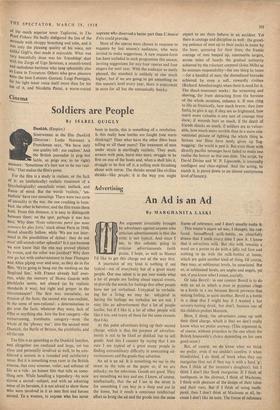 By ISABEL QUIGLY For the film is a study in realism, or the lack of it; an (anthetically) realistic treatment of a (Psychologically) unrealistic event, outlook, and frame of mind. But the words 'realistic,' un- realistic' have two meanings. There were two sorts of unreality in the war, the one resulting in bom- bast, the other in heroism; and the film treats them both. From this distance, it is easy to distinguish between them; on the spot, perhaps it was less easy. Why does 'Nous vaincrons parce que nous sommes les plus forts,' stuck about Paris in 1940, sound absurdly hollow, while 'We are not inter- ested in the possibilities of defeat : they do not exist' still sounds rather splendid? Is it just because we now know that the one .was proved phbney by events, and the other was justified? Why does one go hot with embarrassment to hear Flanagan and Allen piping over and over, as they do in the film, 'We're going to hang out the washing on the Siegfried line,' with France already half over- run, while the memory of Home Guards with Pitchforks seems, not absurd (as by realistic standards it was), but right and proper in the circumstances? The first was unrealistic, an evasion of the facts; the second was non-realistic, in the sense of non-rational : a determination to get over the facts, whatever they were, lack of rifles or anything else. Into the first category—the embarrassing, bombastic category—went the whole of the 'phoney war'; into the second went Dunkirk, the'Battle of Britain, the pitchfork's, and all the rest.

The film is as sprawling as the Dunkirk beaches, and altogether too confused and large, yet too close and personally involved as well, to be con- sidered a success in a rounded and satisfactory sense. But it is something even rarer in the British cinema, that cosy screener, veiler, and softener of life as a rule : an honest film that tells us some- thing .new, While handling a legendary—by now almost a sacred—subject, and with an admiring sense of its heroism, it is not afraid to show those who were involved in it as men first and heroes second. To a woman, to anyone who has never been in battle, this is something of a revelation. Is this really how battles are fought (one starts thinking)? Then what have the other films been telling us all these years? The treatment of men under strain is startlingly realistic. They push, scream with pain, burst into tears, struggle to be first on one of the boats and, when a shell hits it, struggle to be first off it, a yelling mob thrashing about with terror. The shrieks sound like civilian shrieks—like people; it is the way you might expect to see them behave in an accident. Yet there is courage and discipline as well : the growl- ing patience of men up to their necks in water by the hour, queueing for their lives; the frantic courage of men heaped up, unmissable targets, across miles of beach; the gradual authority achieved by the reluctant corporal (John Mills) as he assumes responsibility—the one thing he hates —for a handful of men; the shamefaced bravado achieved by even a soft, cowardly civilian (Richard Attenborough) when there is need for it. The shock-treatment works : the screaming and shoving, far from detracting from the heroism of the whole occasion, enhance it. If men cling to life so frantically, how much braver, then (one feels), to give it up; if they are so frightened, how much more valuable is any sort of courage they show; if wounds hurt so much, if the death of friends shocks so much, if soldiers are as vulner- able, how much more terrible than in a more con- ventional picture of fighting the whole thing is. Serious war films have lately given up flag- wagging : the world is past it. But even those with directly pacifist messages have failed to make one realise the horror as this one does. The script, by David Divine and W. P. Lipscomb, is unusually intelligent and clear-sighted. And the acting, to match it, is pared down to an almost anonymous level of honesty.