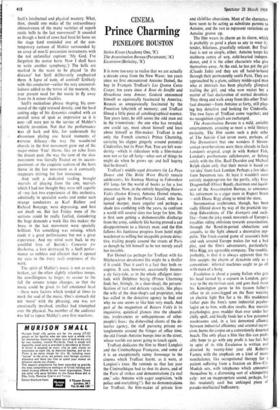 Stolen Kisses (Academy One, 'X') The Assassination Bureau (Paramount, 'A') Escalation (Berkeley, 'X') It is none too easy to realise that we are actually a decade away from the New Wave: ten years since we first encountered Antoine Doinel, the boy in Francois Truffaut's Les Quatre Cents Coups; ten years since A Bout de Souffle and Hiroshima mon Amour. Godard announced himself as equivocally fascinated by America; Resnais as unequivocally fascinated by the Proustian labyrinth of memory; and Truffaut filmed a little piece of autobiographical essence. Ten years later, he still seems the odd man out in the triumvirate: the one who has revealed, one could say, most about himself and least about himself as film-maker. Truffaut is not only the French cinema's Prince Charming, carrying his slipper gingerly around potential Cinderellas, but its Peter Pan. You are left won- dering—which is ridiculous with a' film-maker now not so far off forty—what sort of things he might do when he grows up; and half hoping that he doesn't.

Truffaut's middle-aged dreamers (in La Peau Douce and The Bride Wore Black) remain adolescents; his fireman Montag in Fahrenheit 451 longs for the world of books as for a lost innocence. Now, in the entirely beguiling Baisers Voles (Stolen Kisses), Antoine Doinel returns, played again by Jean-Pierre Leaud, who has turned sharper, more angular and perhaps a shade less confiding with the years, to confront a world still several sizes too large for him. He is first seen getting a dishonourable discharge from the army, soldierly life having proved a sad disappointment to a literary man; and the film follows his footloose progress from hotel night watchman to willing but incapable private detec- tive, trailing people around the streets of Paris as though he felt himself to be not merely small but invisible.

For Doinel (as perhaps for Truffaut with his Hitchcockian devotions) life might be a thriller if it could. That it can't is a fact they both re- cognise. It can, however, occasionally become a sly fairy-tale, as in the whole effulgent inter- lude with Delphine Seyrig (Prince Charming finds her, fittingly, in a shoe-shop), the personi- fication of tact and delicate rapacity. She plays the wife of the shoe-shop's sad proprietor, who has called in the detective agency to find out why no one seems to like him very much. And part of the magnetism of Baisers Voles is its inquisitive, quizzical glances into the absurdi- ties, irrelevancies or unhappinesses of other people's lives: the dishevelled clients of the de- tective agency, the staff pursuing private en- tanglements around the fringes of office time, the old friends Antoine bumps into in the street, whose worlds are never going to touch again.

Truffaut dedicates the film to Henri Langlois and the Cinematheque Frangaise, and some of it is an exceptionally sunny hornmage to the cinema which Truffaut learnt, as it were, at Langlois's knee. He reminds us that last year the Cinematheque had to shut its doors, and of the Paris of strikes and demonstrations ('a real one,' asks Antoine with eager scepticism, 'with police and everything?'). But no demonstrations for Truffaut, the film-maker of private lives and childlike obsessions. Most of the characterF here seem to be acting as substitute parents to Antoine, and the rest to represent variations on Antoine grown up.

The film wears its charm on its sleeve, which is probably as good a place as any to wear it: tender, hilarious, gracefully reticent. But Truf- faut is not so simple, either. Antoine keeps his stubborn centre of wry, cold-hearted indepen- dence, and it is the other characters who give themselves away. At the end, he has got the girl (Claude Jade) and they are off hand-in-hand through their permanently sunlit Paris. They are approached by a glum, solitary midde-aged man who at intervals has been playfully glimpsed trailing the girl, and who now makes her a matter of fact declaration of eternal devotion. They shrug and walk away from this other Truf- faut dreamer—from Antoine at forty, still play- ing boy detective and looking for Cinderella. The two faces of Truffaut come together; and no recognition signals are exchanged.

The Assassination Bureau is a mild, amiable entertainment, arousing at most a mild literary curiosity. The film seems such a pale echo of The Suicide Club (even more, perhaps, of The Dynamiter) that one wonders if Steven- sonian reverberations were there already in Jack London's original, crept in with Robert Fish, London's posthumous collaborator, or belong solely with the film. Basil Dearden and-Michael Relph claim only that their movie is based on 'an idea' from Jack London. Perhaps a few ideas from Stevenson too. At least it wouldn't seem entirely inappropriate for the portly, silky Ivan Dragomiloff (Oliver Reed), chairman and liquid- ator of the Assassination Bureau, to announce his retirement to a cigar store in Rupert Street —with Diana Rigg along to mind the store.

Stevensonian exuberance, though, has been sadly filleted down by way of the prankish toy- shop Edwardiana of The Avengers and such- like—from the joky mock newsreels of Europe's royalties riding oblivious towards assassination, through the Bond-in-period abductions and assaults, to the fight aboard a decorative zep- pelin. The frock-coated game of assassin's hide and seek around Europe makes for not a bad plot, and the film's adventurers, particularly Miss Rigg, are agreeable company. The trouble, probably, is that it is always apparent that the film accepts the charm of dynamite only as a convention : infernal machines ought to go off with more of a bang.

Escalation is about a young Italian who gets his head turned by a sojourn in London, gate- way to the mysterious east, and goes back from his Kensington gurus to his tycoon father's office to sit cross-legged on the floor wearing an electric light flex for a tie. His maddened father puts the firm's tame industrial psycho- logist on to him, with dire results. Boy marries psychologist, goes madder than ever under her chilly spell, and finally feeds her a few poisoned mushrooms and, in a last demented alliance between industrial efficiency and oriental mysti- cism, burns the corpse on a conveniently deserted beach. The only place a film like this can prob- ably hope to go with any profit is too far; but in spite of its title Escalation is written and directed by twenty-four year old Roberto Faenza with the emphasis on a kind of inane nonchalance, like occupational therapy for a patient suffering from a fixation on Blow-Up. Modish sets, with telephones which announce themselves by a distressing sort of whimpering yelp: not an inappropriate sound, perhaps, for this resolutely cool but unhinged piece of pseudo-intellectual buffoonery.