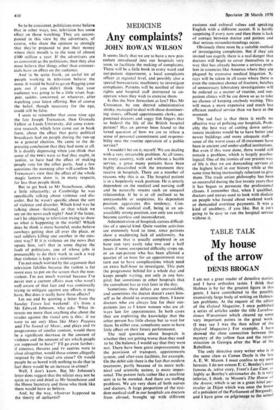 It seems likely that we are to have a new pro- cedure introduced into our hospitals very soon, to facilitate the making of complaints. There will be a little book in every ward and out-patient department, a local complaints officer at regional level, and possibly also a special bureaucratic machinery to investigate complaints. Patients will be notified of their rights and hospital staff instructed to co- operate when they wish to exercise them.

Is this the New Jerusalem at last? Has Mr Crossman, by one shrewd administrative stroke, managed to deal with those domineer- ing sisters, offhand appointments clerks, un- punctual doctors and soggy fish fingers that so bedevil the life of the British hospital patient? Has an answer been found to the vexed question of how we are to infuse a sense of personal commitment and responsi- bility into the routine operation of a public service?

I wouldn't bet on it, myself. We are dealing with a very intractable problem. At all times, in every country, with and without a health service, a great many patients have been highly dissatisfied with the treatment they receive in hospitals. There are a number of reasons why this is so. The hospital patient is in a hopelessly weak position. He is utterly dependent on the medical and nursing staff and he naturally resents such an unequal relationship. If he is at all inclined to be unreasonable or suspicious, his dependent position aggravates this tendency. Con- versely, the medical staff, being in an un- assailably strong position, can only too easily become careless and inconsiderate.

Administration of hospitals carries difficul- ties of a special kind. Quite routine activities are extremely hard to time, since patients show a maddening lack of uniformity. An operation that is usually completed in an hour can very easily take two and a half hours if some unexpected difficulty crops up, or an out-patient who has been allotted a quarter of an hour for an appointment may turn out to have complications which need an extra half-hour to investigate. This puts the programme behind for a whole day and keeps people waiting, not only in one hos- pital, but sometimes in other hospitals that the consultant has to visit later in the day.

Sometimes these delays are unavoidable, and sometimes the doctor doesn't exert him- self as he should to overcome them. I know doctors who are always late for their out- patients just as I know women who are al- ways late for appointments. In both cases they are exploiting the knowledge that the other person has little choice but to wait for them. In either case, complaints seem to have little effect on their future performance.

The real question about hospitals is whether they are getting worse than they used to be. On balance, I would say that they were not. There have been great improvements in the provision of transport, appointments system, and after-care facilities, for example. On the debit side there is the fact that modern treatment, partly because of its more tech- nical and scientific nature, is more imper- sonal. The patient feels rather like a machine sent in to be mended. And there are staffing problems. We are very short of both nurses and doctors. A large proportion of the resi- dent medical staff in our hospitals are doctors from abroad, brought up with different

customs and cultural values and speaking English with a different accent. It is hardly

surprising if every now and then there is lack of contact between doctor and patient and that serious misunderstandings occur.

Obviously there must be a suitable method of investigating complaints. But if they are invited too eagerly there is a real danger that doctors will begin to cover themselves in a way that has already become a serious prob- lem in countries like America where they are plagued by excessive medical litigation. X- rays will be taken in all cases where there is even the remotest chance of fracture, batches of unnecessary laboratory investigations will be ordered as a matter of routine, and out- patient clinics will be cut down so as to take no chance of keeping anybody waiting. This will mean a more expensive and much less efficient medical service than we have at the moment.

The sad fact is that there is really no effective way of policing our hospitals. Prob- ably the best way of cutting down unfor- tunate incidents would be to have better and newer buildings and more adequate staff— some of the worst cases of ill-treatment have been in ancient and under-staffed institutions. But even if this were done, there would still remain a problem, which is largely psycho- logical. One of the ironies of our present way of life is that we are demanding services at the highest level in our history while at the same time being increasingly reluctant to give them. The trade union philosophy has been so successful during the last twenty years that it has begun to permeate the professional classes. I remember that, when I qualified, doctors and nurses used to look with disdain on people who fussed about weekend work or demanded overtime payments. It was a kind of snobbery, if you like. But it isn't going to be easy to run the hospital service without it.