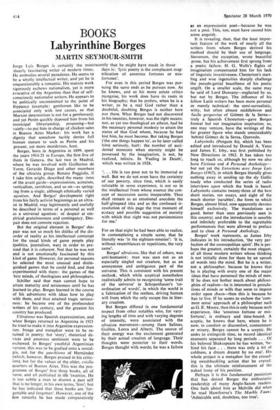 Borges, born in Argentina in 1899, spent the years 1914-21 in Europe, the first five of them in Geneva, the last two in Madrid, where he was involved with Guillermo de Torre, Gerardo Diego and other members of the ultraista group. Renato Poggiolo, if I take him aright, described the many -isms of the avant garde—expressionism, acmeism, verticalism, zenithism, and so on—as spring- ing from a single, although ethnically varied agonism. And Borges' development right from his fairly activist beginnings as an ultra- 1st in Madrid, may legitimately and usefully be described in terms of a personal as well as a universal agonism: of despair at em- pirical gratuitousness and contingency. Des- pair does not connote rejection.

But the original element in Borges' des- pair was not so much his dislike of the dis- order of reality as his intellectual contempt for the usual kinds of game people play (politics, journalism, war) in order to pre- tend that it is coherent. Not that he was not and is not emotionally fascinated by this kind of game. However, for personal reasons he selected the most unusual and distin- guished games that he could find, and then experimented with them: the games of the best minds, of theologians and philosophers.

Schiller said that man cannot hope to attain maturity and seriousness until he has learned to play. Borges learned in the course of his adventures with ideas how to play with them, and thus attained tragic serious- ness: he became one of the profoundest writers of his century, and the greatest his country has produced.

Uttraismo was Spanish expressionism, and when Borges returned to Argentina in 1921 he tried to make it into Argentine expression- ism. Image and metaphor were to be re- tained in poetry; but 'story', rhetorical de- vices and amorous sentiment were to be eschewed. In Borges' youthful Argentinian version, this was to be grafted onto a nostal- gia, not for the gauchismo of Hernandez (which, however, Borges praised in his critic- ism), but for the values of the older, criollo quarters of Buenos Aires. This was the pro- gramme of Borges' first three books, all of verse, and all published in tee 'twenties. He is too subtle a man to disown a past self that is no longer, in his own terms, 'him'; but he has indicated that these books are 'for- gettable and forgotten'. However, one of the few remarks he has made comparatively days is: 'lyric poetry is the complacent mag- nification of amorous fortunes or mis- fortunes'.

For even in this period Borges was pur- suing the same ends as he pursues now. As he knows, and as his more astute critics recognise, his work does have ifs roots in his biography; that he prefers, when he is a writer, to be a real God rather than a doubtful, doubting Borges is neither here nor there. What Borges had not discovered in his twenties, however, was the right means; nor, as yet too theological an atheist, had he the necessary personal modesty to attain the status of that God whom, because he had lost him, he must become. But taking Borges ('the one things happen to', as he later called him) seriously, hurt: the number of acci- dental moments when eternity might be possessed by the imagination, is not, he realized, infinite. In 'Feeling in Death', which was written in 1928.

. . life is too poor not to be immortal as well. But we do not even have the certainty of our poverty, since time, which is easily refutable in sense experience, is not so in the intellectual from whose essence the con- cept of succession seems inseparable. Thus shall remain as an emotional anecdote the half-glimpsed idea and as the confessed ir- resolution of this page the true moment of ecstacy and possible suggestion of eternity with which that night was not parsimonious for me.'

For on that night he had been able to realize, in contemplating a simple scene, that he literally was 'in the eighteen-nineties': 'it is, without resemblances or repetitions, the very same'.

Borges' ultraismo, like that of others, was anti-humanist: man was seen not as an especially singled out creature, but as an anonymous and ambiguous part of the universe. This is consistent with his present outlook, which while sceptical nonetheless realistically admits to recognising 'some trait of the universe' in Schopenhauer's 'co- ordination of words', in which the world is a fabrication of the restless, driving human will from which the only escape lies in liter- ary creation.

But Borges differed in one fundamental respect from other notables who, for vary- ing lengths of time and with varying degrees of intensity, were associated with the ultraista movement—among them Salinas, Guillen, Lorca and Alberti. The source of their energy was the excitement generated by their actual creation of language. Their thoughts were posterior to their words. Borges thought with words; he was a failure as an expressionist poet—because he was not a poet. This, too, must have caused him some anguish.

It is revealing, then, that the least impor- tant feature of the work of nearly all the writers from whom Borges derived his method should be their use of language. Stevenson, the exception, wrote beautiful prose, but his achievement first sprung from a poetic failure. H. G. Wells's flights of imagination compensated him for his lack of linguistic inventiveness. Chesterton's start- ling and wise ingenuities sharply challenge the pseudo-genial beastliness of his poetic ungift. On a smaller scale, the same may be said of Lord Dunsany—neglected by us, but not by Borges. The influence of his fellow Latin writers has been more personal or merely technical: the semi-surrealistic, witty, but often almost middlebrow and facile greguerias of Gomez de la Serna- truly a Spanish Chesterton—gave Borges formal but not imaginative inspiration; so, one may venture, have the writings of the far greater figure who stands unmistakably behind Gomez de la Serna, Quevedo.

Labyrinths (Penguin 8s), which has been edited and introduced by Donald A. Yates and James E. Irby,- was first published by New Directions in 1962. It has taken too long to reach us, although by now we also have Fictions and A Personal Anthology— but not yet the Entretiens avec Jorge Luis Borges (1967), in which Borges literally gives nothing away in sending up the sly Gallic toady who conducted the series of radio interviews upon which the book is based. Labyrinths contains twenty-three of the best short stories, ten essays, and eight of the much shorter 'parables', the form to which Borges, almost blind, now apparently devotes himself exclusively. The translations are good, better than ones previously seen in this country; and the introduction is sensible and infinitely preferable to the regrettable performances that were allowed to preface and to close A Personal Anthology.

Borges' work represents, as James Irby indicates in his introduction, 'the very per- fection of the cosmopolitan spirit'. He is per- haps the greatest, certainly the most elegant, of all those modern writers whose thinking is not initially done for them by an uprush of words into the mind. But he is a writer, not a philosopher, because he knows that he is playing with every one of the major ideas that have possessed the minds of men. If he does not bother much about philoso- phies of realism—he is interested in postula- tions of minds or wills that seem to impose order upon chaos—then this is because he has to live. If he seems to eschew the 'com- mon sense' approach of a philosopher such as G. E. Moore, then this is only because such experience, like 'amorous fortune or mis- fortune', is ordinary and time-bound. A sceptic, he knows that here, where he is now, in comfort or discomfort, contentment or misery, Borges cannot be a sceptic. He seeks to extinguish time, to record identical moments separated by long periods . . . Of his beloved Shakespeare he has written, 'be- hind his face . . . there was only a bit of coldness, a dream dreamt by no one'. His whole project is a metaphor for the crusad- ing swashbuckling action that he craved; this is the ultimate reinforcement of the naked irony of his position. Perhaps it is this fundamental pessimism that has denied Borges the enthusiastic readership of many Anglo-Saxon readers. One feels about him as Melville did when he read Hawthorne's The Marble Faun: `Admirable and, doubtless, too true'.