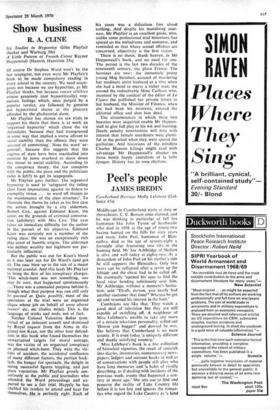 Six Studies in Hypocrisy Giles Playfair (Seeker and Warburg 50s) A. Little Pattern of French Crime Rayner Heppenstall (Hamish Hamilton 35s) Of course Dr Stephen Ward won't be the last scapegoat, not even were Mr Playfair's book to be made compulsory reading in every school in the country. We need scape- goats not because we are hypocrites, as Mr Playfair thinks, but because causes celebres arouse genuinely (not hypocritically) voy- euristic feelings which, once purged by a popular verdict, are followed by genuine not hypocritical shame at the pleasure afforded by the gladiatorial show.

Mr Playfair has chosen six sex trials to support his thesis that there is at work an 'organised hypocrisy' which chose the six defendants 'because they had transgressed in some way that implied a worse affront to social stability than the offence they were accused of committing'. Note the word 'or-. ganised', because this suggests that the engines of state have been marshalled into position by some overlord to shoot down this threat to social stability. According to the conspiracy theory, the law conspires with the public, the press and the politicians (who is left?) to get its scapegoats.

Mr Playfair goes further. The organised hypocrisy is used to 'safeguard the ruling class from imputations against its fitness to exemplify virtue . . . to ward off threats to the maintenance of the class structure'. To illustrate this theme he takes as his first case the action brought by a city alderman, Robert Cox, against Edmund Kean, the actor, on the grounds of criminal conversa- tion (adultery) with Mrs Cox. The case raises an immediate difficulty for the author in the pursuit of his objective. Edmund Kean was certainly not a member of the ruling class. He was an exceptionally rich play-actor of humble origins. The alderman was neither wealthy nor highborn nor par- ticularly influential.

But the public was out for Kean's blood as it was later out for Dr Ward's (and got it). The case blew up to the size of a major national scandal. And this leads Mr Playfair to bring the first of his conspiracy charges. 'This witch-hunt was not something, one may be sure, that happened spontaneously ...There was a concealed purpose behind it, though what that purpose was can still only be guessed at. Quite possibly, most of the spectators at the trial were an organised clique whose job on behalf of some absent master' etc, etc (italics mine). This is the language of winks and nods, not of fact.

Neither Colonel Valentine Baker (con- victed of an indecent assault and dismissed by Royal request from the Army in dis- grace) nor Kean, nor the other four defend- ants in this book who found themselves the unwarranted targets for moral outrage, was the victim of an organised conspiracy or planned witch-hunt. They were the vic- tims of accident, the accidental confluence of many different factors, the puritan back- lash, the hunger for spectacle, the delight in seeing successful figures toppling, and just plain voyeurism. Mr Playfair growls cen- soriously at the public and journalists who attended the Ward proceedings and ex- pected to see a fair trial. Happily he has enabled his readers to attend and hear for themselves, He is perfectly right. .Each of his cases was a ridiculous fuss about nothing. And despite his moralising sour- ness, Mr Playfair is an excellent guide, who, unlike some professional trial historians, has spared us the melodrama and nonsense, and reminded us that where sexual offences are concerned, objectivity is the first victim.

There is no thesis, thank heaven, in Mr Heppenstall's book, and no need for one. The period is the last two decades of the nineteenth century, the place France. The heroines are two: the immensely pretty young Meg Steinheil, accused of murdering her mediocre artist husband at a time when she had a mind to marry a richer man; the second the redoubtable Mme Caillaux who, incensed by the conduct of the editor of Le Figaro (he published her private letters to her husband, the Minister of Finance, when she had been his mistress), entered the editorial office and shot him dead.

The circumstances in which these two beauties were acquitted enable Mr Heppen- stall to give full play to his wit and learning. Death penalty retennonists will note with interest that female murderers were plenti- ful at the period when they were spared the guillotine. And historians of the mindless Charles Manson killings might read with advantage Mr Heppenstall's chapter on those bomb happy anarchists of la belle epoque. History has its own rhythms.