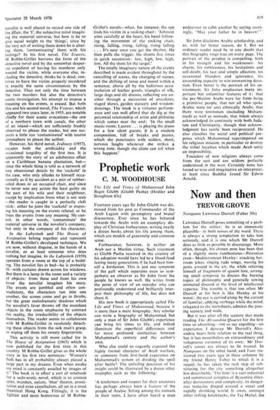 Fourteen years ago Sir John Glubb was dis- missed from his post as Commander of the Arab Legion with peremptory and brutal discourtesy. Ever since he has behaved towards the Arabs with an exemplary dis- play of Christian forbearance, writing nearly a dozen books about his life among them, which are models of generosity and common sense.

Forbearance, however, is neither an Arab nor a Muslim virtue. Such treatment as Glubb Pasha received in the country of his adoption would have led to a blood-feud lasting many generations if he had been him- self a Jordanian. This is just one symptom of the gulf which separates even so sym- pathetic an observer as Sir John from the people he knows so well. He writes from the point of view of an outsider who can profoundly understand and brilliantly inter- pret their philosophy of life, but does not share it.

His new book is appropriately called The Life and Times of Muhammad, because it is more than a mere biography. Any scholar can write a biography of Muhammad, but only a man of Sir John Glubb's experience can bring his times to life, and indeed illuminate the superficial differences and far more profound similarities between Muhammad's century and the author's own.

Who else could so cogently expound the highly formal character of Arab warfare, or comment from first-hand experience on Muhammad's system of dividing the spoil after battle? The unfailing precision of his insight could be illustrated by a dozen other examples such as the following: 'A tenderness and respect for their ancestors has perhaps always been a feature of the people of Arabia. Sitting among the nomads in their tents, I have often heard a man endeavour to calm another by saying sooth- ingly, "May your father be in heaven!"' Sir John disclaims Arabic scholarship, and so, with far better reason, do I. But no ordinary reader need be in any doubt that this biography rings true on every page. The portrait of the prophet is compelling. both in his strength and his weaknesses: his charm, his ruthlessness, his hesitations and self-doubt, his tact and simple affection, his occasional blunders and ignorance, his astounding capacity to win unswerving devo- tion. Even better is the portrait of his en- vironment. Sir John emphasises many im- portant but unfamiliar features of it: that the pre-Muslim Arabs were far from being a primitive people; that not all who spoke Arabic were (or are) ethnically Arabs; that there were townsmen (including Muham- mad) as well as nomads; that Islam always acknowledged its continuity with both Juda- ism and Christianity, though that acknow- ledgment has rarely been reciprocated. He also classifies the social and political pur- poses which Muhammad superimposed on his religious mission, in particular to destroy the tribal loyalties which made Arab unity an impossibility.

Founders of new religions alirays come from the east and are seldom perfectly understood in the west. Certainly none has found so wise and imaginative an interpreter, at least since Buddha found Sir Edwin Arnold.