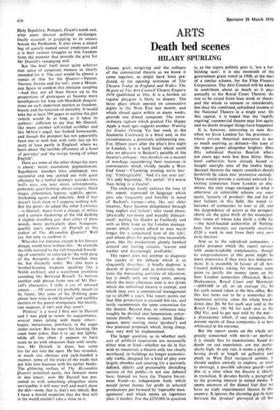 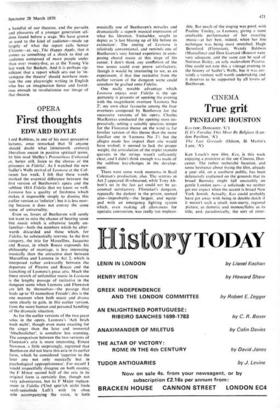 Gloom, grief, misgiving and the collapse of the commercial theatre as we know it come together, as might have been pre- dicted, in the opening sentences of The Theatre Today in England and Wales: The Report of The Arts Council Theatre Enquiry 1970 (published at 10s). It is a burden no regular playgoer is likely to dispute. The three plays which opened on consecutive nights in the West End last month, and which closed again within as many weeks, provide one dismal symptom. The extra- ordinary rapture which greeted The Happy Apple a week ago, suggests another. Waiting for Godot (Young Vic last week at the Jeannetta Cochrane) is a third and, in the circumstances, a positively exhilarating one. For, fifteen years after the play's first night in Londofi, it is a hard heart which could take no pleasure in Beckett's parable of the theatre's collapse: two derelicts on a mound of wreckage squandering their resources in conversation which vividly recalls a West End foyer—`Charming evening we're hav- ing'. 'Unforgettable'. 'And it's not over yet'. `It's only beginning'. 'It's awful'. 'It's worse than being in a theatre'.

The exchange nicely conveys the tone of this report, expressed in language which puts one frequently and forcibly in mind of Beckett's tramps—who, like our older theatres, 'have become delapidated through long neglect and failure'; who stand about, 'physically run-down and morally disheart- ened', waiting for Godot as fruitlessly and with as little hope as the London manage- ments which 'cannot afford to wait much longer for a conjectural turn of the tide'; and whose ploys for passing time meanwhile grow, like the productions glumly hawked around our touring circuits, 'scarcer and seedier and decreasingly profitable'.

The report does not attempt to diagnose the causes of the debacle which it so eloquently describes: it briefly deplores 'a dearth of product' and as tentatively men- tions the marauding activities of television; but it dwells only on rising costs, among which the most villainous item is SET (from which the subsidised theatre is exempt, and which may cost a commercial management up to £8,000 a year). The report points out that film production is excused this tax, and tartly recommends the same concession for the theatre. Beyond that, its substance may roughly be divided into lamentation, exhor- tation (briefly: more money, more Shake- speare, more touring, more 'product') and two practical proposals which, being cheap, may very well be implemented.

The larger question, as to whether such acts of artificial respiration are necessarily either wise or kind—whether we do in fact wish to resuscitate a theatre only too clearly moribund, in buildings no longer economic- ally viable, designed for a kind of play now largely obsolete and catering for a narrowly defined, elderly and presumably dwindling section of the public—is not one debated here. Instead we have the Theatre Invest- ment Fund—as independent body which would invest money for profit in selected productions put forward by 'reputable man- agements' and which seems an ingenious plan, if modest. For the £250,000 in question is, as the report politely puts it, 'not a for- bidding sum'; it is one twentieth of the government grant voted in 1948, at the start of a similar scheme, for the Film Finance Corporation. The Arts Council will be asked to contribute about as much as it pays annually to the Royal Court Theatre; the rest to be raised from loan stock or shares. and the whole to amount to considerably less than the combined, subsidised income of the National Theatre in a single year. On this capital, it is hoped that the 'rapidly expiring' commercial theatre may live again, and no doubt stranger things have happened.

It is, however, interesting to note that when we leave London for the provinces— where private theatrical enterprise is not so much expiring as defunct—the tone of the report grows altogether brighter. Here fifty subsidised theatres flourish where ten years ago were less than thirty. Here, local authorities have already leased or bought outright nine of the twelve large, decrepit theatres the report considers should forthwith be taken into 'protective custody.' These would provide a national network for visiting companies from London or else- where; the only snags envisaged in what is otherwise an admirable scheme are, once again, 'scarcity of product'; the sad list of past failures , in this field; the noted re- luctance of companies to tour at all, and the despondency of actors at the prospect; above all, the great thrift of the municipal- ities (some of whom take thrift a trifle far —the hard-headed authorities of Notting- ham, for instance, are currently receiving £520 a week in rent from their very own civic theatre).

And so to the subsidised companies, a joyful prospect which the report surveys with understandable complacency, though its congratulations at this point might be more impressive if they were less indiscrim- inate. It is staunchly in favour of all Arts Council policies, taking, for instance, some pains to justify the money spent on the four London companies (National, Royal Shakespeare, Royal Court and Mermaid) —£689.608 in all, or on average Its 9d for each pound taken at the box office. But this last turns out to be a somewhat dis- ingenuous statistic, since the whole breaks down into 20s 9d for each seat sold at the Royal Court, 18s 9d for each seat at the Old Vic, and 6s per seat sold by the RSC- a discrepancy which, if one compares the present merits of these companies, is at best whimsical in the extreme.

But the report seems on the whole not greatly concerned with merit—or perhaps it is simply that its expectations, based no doubt on sad experience, are not partic- ularly high. At any rate, it seems a pity that. having dwelt at length on gallantry and pluck in West End rearguard actions, it should neglect entirely to explore, or eyen to envisage, a possible advance guard-end this at a time when the theatre is clearly in transition. It devotes barely a paragraph to the growing interest in mixed media. It seems unaware of the dismal fact that we - have no truly experimental theatre in this country. It ignores the alarming gap in taste between the 'product' purveyed in all but

a handful of our theatres, and the pursuits and pleasures of a younger generation sel- dom found before a stage. We have grown so used to the kind of audience—made up largely of what the report calls Senior Citizens—at, say, The Happy Apple, that it comes as something of a shock to find an audience composed of more people under than over twenty-five, as at the Young Vic last week for Beckett. And it is perhaps sig- nificant that a report which sets out to In- vestigate the theatre' should nowhere men- tion the one playwright writing in English who has an imagination fierce and fastid- ious enough to revolutionise our image of that theatre.