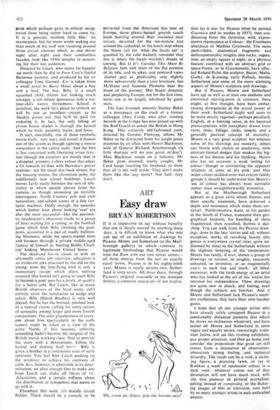 If it is impossible to say without banality that one is 'deeply moved' by anything these days, it is difficult to know what else one can say of an exhibition of drawings by Picasso, Moore and Sutherland (at the Marl- borough gallery) in which—contrary to legitimate forebodings that Picasso would wipe the floor with our two senior artists— all three emerge from the test on exactly equal terms. Picasso is in his eighty-ninth year, Moore is nearly seventy-two, Suther- land is sixty-seven. All three share, through Picasso's original trouvaille in the nineteen thirties, a common source of—if not inspira-

tion (as it was for Picasso when he painted Guernica and its studies in 1937), then con-

ditioning from the ferocious, wild, expres- sionist masterpiece at Colmar: the Eisenheim altarpiece of Mathias Grunwald. The same pain-ridden, anatomical fragments and anthropomorphic insights into rocks, vegeta- tion, an empty square at night, or a physical feature combined with an abstract grid or space-frame, as in Giacommetti, have affec- ted Roland Piche, the sculptor, Bacon, Matta, Gorky, de Kooning, early Pollock, besides Sutherland and some of the more alarming aspects of Moore's sculpture and drawings.

But if Picasso, Moore and Sutherland have age as well as at least one aesthetic and emotional starting-point in common, there might, at first thought, have been embar- rassing divergencies in the actual power of their work. Sutherland might well seem to be more strictly regional—perhaps peculiarly English, in a limiting sense, in his haunted preoccupations with metaphors drawn from roots, trees, foliage, rocks, insects, and a generally pastoral concept of mortality.

Moore is a very great sculptor; but whereas some of his drawings are masterly, others can bristle with cliches of modernity, little abstract-formal dodges that weaken the big- ness of his themes and his thinking. Moore also has on occasion a weak feeling for colour—though in considering the apparent triteness of some of his pink, and blue water colour-skidded-over-wax crayon family groups it should be understood that Moore's use of colour has always been surrealist rather than straightforwardly evocative.

But at the Marlborough Sutherland appears as a great artist whose themes, and their specific treatment, have achieved a depth and resonance which make them uni- versal: Pembrokeshire, Kent, or his garden in the South of France, transcend their geo- graphical location; his handling of these, fragmented, then reunified, themes is daz- zling. You can walk from the Picasso draw- ings, done in the late 'sixties and all, without exception, works of ravishing beauty (the genius is everywhere crystal clear, quite un- dimmed by time) to the Sutherlands without the slightest lowering of the temperature. Moore has rarely, if ever, shown a group of drawings so various, so toughly, raucously

coloured, so inventive, or so magisterially exact, in each line and mark: all filled,

moreover, with the fresh energy of an artist who has looked at the art of the 'sixties but retained his independence. These drawings are quite new in attack, and feeling, even though the subjects are familiar. And if Moore and Sutherland lack Picasso's south- ern exuberance, they have their own harsher gusto.

comfortably distanced posterity (for which he shows no inclination whatever), and have sealed off Moore and Sutherland in some vague and equally secure, reassuringly irrele- vant limbo, will see this riveting exhibition, pay proper attention, and then go home and consider the proposition that great art still comes from a detonation of observation, obsessively strong feeling, and technical wizardry. The result can be a rock, a reclin- ing figure, a prancing fawn, or (as in Rothko) a wash of opalescent colour in a dark void: whatever comes out of that detonation will not have much truck with

the thin glamour of pictural journalism, editing instead of composing, or the flicker- ing images of film or television, now held by so many younger artists in such enthralled esteem.