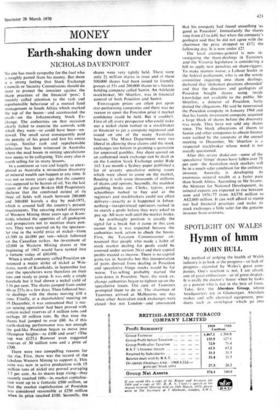 No one has much sympathy for the fool who is roughly parted from his money. But there is a strong feeling that Stock Exchange

Councils or Security Commissions should do more to protect the innocent against the sharp practices of the financial 'pros'. I recently called attention to the rash and reprehensible behaviour of a mutual fund management in South Africa which marked the top of the boom—and accentuated the crash—on the Johannesburg Stock Ex- change. The authorities on that occasion clearly failed to exercise the controls with which they were—or could have been—en- dowed. The small saver consequently paid the penalty of his greed and lost his entire savings. Similar rash and reprehensible behaviour has been witnessed in Australia where the mad boom in mining speculations now seems to be collapsing. This story also is worth telling for its many lessons.

In a continent so vast and largely so unex- plored as Australia a miraculous- discovery of mineral wealth oan happen at any time. It was not so many years ago that the country was supposed to be barren of oil. Yet the last report of the great Broken Hill Proprietary declares that the combined output of its three oil fields will reach between 280,000 and 300,000 barrels a day by mid-1971, which is around half the country's present requirements. The amazing nickel discovery of Western Mining three years ago at Kam- balda whetted the appetites of all geologists and prospectors not to mention share pun- ters. They were spurred on by the spectacu- lar rise in the world price of nickel—from £1,500 to £6,000 per ton—which followed on the Canadian strikes. An investment of £2,000 in Western Mining shares at the beginning of 1967 would have turned into a fortune today of £60,000.

When a small company called Poseidon an- nounced a major strike of nickel at Win- darra, north of Kambalda, in September last year the speculators were therefore on their toes and ready to jump. It was only a single borehole but it had shown a nickel yield of 3.56 per cent. The shares jumped from under 40s to 275s in a few days. Then followed hec- tic dealings with the shares moving £10 a time. Finally, at a shareholders' meeting on 19 December, it was announced that 'a ma- jor mining operation' had been proved with certain nickel reserves of 4 million tons and perhaps 10 million tons. By that time the shares had jumped to over £80. As if this earth-shaking performance was not enough the god-like Poseidon began to move into Olympian heights—to £100 and over! (The top was £125.) Rumour even suggested reserves of 30 million tons and a price of £200.

There were two compelling reasons for the rise. First, there was the record of the fabulous Western Mining to support it. This mine was now in active production with 15 million tons of nickel ore proved averaging 3.7 per cent. As its shares kept rising—they recently touched 160s—its market capitalisa- tion went up to a fantastic £500 million, so that the market capitalisation of Poseidon was considered reasonable at £250 million when its price touched £100. Secondly, the

shares were very tightly held. There were only 21 million shares in issue and of these 500,000 shares had been issued to friendly groups at 55s and 200.000 shares to a finance holding company called Samin. An Adelaide stockbroker, Mr Shierlaw, was in financial control of both Poseidon and Samin.

Extravagant prices are often put upon star-performing companies and there was no reason to upset the Poseidon price if market confidence could be held. But it couldn't. First of all, every prospector who could stake out a nickel claim rushed to a stockbroker or financier to get a company registered and issued on one of the many Australian bourses. The Mines Department were too liberal in allowing these claims and the stock exchanges too lenient in granting a quotation for unproved gambles. Any share quoted on an authorised stock exchange can be dealt in on the London Stock Exchange under Rule 163. Last month a Sydney paper published a list of seventy speculative mining issues which were about to come on the market, flooding it with some thousands of millions of shares and options. Secondly, the maddest gambling broke out. Clerks, typists, even schoolboys rushed to buy and as the registrars and stockbrokers could not effect delivery—exactly as it happened in Johan- nesburg—inexperienced operators rushed in to snatch a profit before they were asked to pay up. All went well until the market broke.

An overbought position is usually the signal for a break but it came in this case sooner than it was expected because the authorities took action to check the boom. First, the Taxation Commissioner an- nounced that people who made a habit of stock market dealing for profit could be assessed under section 26(a) and their capital profits treated as income. There is no capital gains tax in Australia but this interpretation of gains derived from dealing in Poseidon and speculative fringe stocks would be far worse. Tax-selling probably started the turn-down in Poseidon. Next, the stock ex- change authorities began to tighten up on the speculative issues. The case of Tasminex prompted them to do so. The chairman of Tasminex arrived at Melbourne one day when other Australian stock exchanges were closed—but not London—and announced that his company had found something as good as Poseidon'. Immediately the shares rose from £3 to £40; but when the company's geologist said that he did not agree with the chairman the price dropped to £17/ the following day. It is now under £21

The local attorney-general is now in- vestigating the share-dealings in Tasminex and the Victoria legislature is considering a bill to apply new penalties on share-riggers. To make matters worse, a Labour leader in the federal parliament, who is on the senate committee inquiring into share dealings, declared that 'dishonest practices abounded' and that the directors and geologists of Poseidon bought shares using inside knowledge not available to the public. Mr Shierlaw, a director of Poseidon, hotly denied the allegations. He said he resurrected the Poseidon company in January 1968 and that his family investment company acquired a large block of shares before the discovery was made. They have not sold any shares since. The block allocations of shares to Samin and other companies to obtain finance were ratified by the company at the annual meeting in December. Mr Shierlaw is a respected stockbroker whose word is not usually questioned.

After this severe shake-out—some of the speculative 'fringe' shares have fallen over 75 per cent—the Australian stock markets will be in a much safer condition for the ordinary investor. Australia is developing its enormous mineral wealth at a faster pace than South Africa. According to Mr Swartz. the Minister for National Development, its mineral exports are expected to rise between now and 1976/77 from AS750 million to A52,000 million. It can well afford to stamp out bad financial practices and make its stock exchanges a little safer for the genuine investor from overseas.