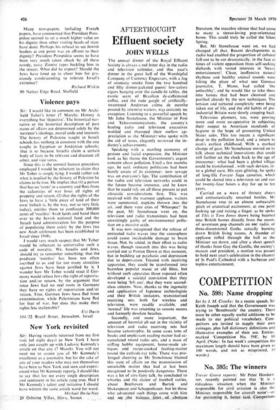 The annual dinner of the Royal Effluent Society is always a red letter day in the radio and television calendar, and this year's dinner in the great hall of the Worshipful Company of Currency Engravers, with a fog of aromatic smoke from the two hundred and fifty dinner-jacketed guests' low-calory cigars hanging over the candle-lit tables, the exotic scent of Brazilian de-caffeinated coffee, and the rude gurgle of artificially- sweetened Andorran creme de menthe poured by attentive waiters, was certainly no exception. Listening to a powerful speech by Mr John Stonehouse, the Minister of Post and Telecommunications, the country's leading radio and television executives nodded and thumped their mellow ap- preciation as the Minister' who spoke with the aid of notes, elegantly reviewed the in- dustry's achievements.

Speaking with a startling economy of gesture and facial expression, the Minister took as his theme the Government's urgent concern about pollution. Until a few months ago, he said, ordinary politicians had been barely aware of its existence: now sewage was on everyone's lips. The contribution of the radio and television networks could in the future become immense, and he knew that he could rely on all those present to put altruistic considerations first. This was received with the warmest applause, waiters were summoned, napkins thrown into the air, and there were cries of 'Whoopee!' In the past, Mr Stonehouse went on, the television and radio transmitters had been unwittingly guilty of environmental pollu- tion on a massive scale.

It was now recognised that the release of untreated radio waves into the atmosphere could cause incalculable damage to brain tissue. Not, he added, in their effect as radio waves, though research into this was being carried out at Porton Down at that moment, but in building up psychosis and depression due to deprivation. Treated with receiving apparatus, they could be transformed into harmless popular music or old films, but without such apparatus those exposed often developed a suicidal conviction that they were being 'left out', that they were second- class citizens. Now, thanks to the ingenuity and application of Japanese technologists and their British imitators, transistorised receiving sets. both for wireless and television, were readily available, and 'normal' life was returning to remote moors and formerly desolate beaches.

Secondly, and more important, the amount of harmful all out in the vicinity of television and radio receiving sets had become catastrophic. In some cases tons of books and unpleasant reading matter had ac- cumulated round radio sets, and a mass of stifling hobby equipment, home-made an- tiques and recipe-cooked feeding-matter round the cathode-ray tube. There was pro- longed cheering as Mr Stonehouse blamed this state of affairs on the transmission of unsuitable matter that had at last been recognised to be positively dangerous. There was a lot of airy-fairy talk, he concluded to whistles and the clatter of football rattles, about Beethoven and Bartok and Shakespeare and Schopenhauer, but let those who advocated such things come with him askd Sec ,the bidese4s, liumt.of abstrine-

literature, the macabre silence that had come to many a stereo-loving pop-orientated home. This could truly be called the Silent Spring.

But, Mr Stonehouse went on, we had changed all that. Recent developments in radio had enabled the proportion of cultural fall-out to be cut dramatically, in the face at times of violent opposition from self-seeking diehards with vested interests in 'heavy entertainment'. Clean, inoffensive natural rhythms and healthy animal sounds were taking the place of what one German journalist, T. Mann, had called 'the unhealthy', and he would like to take them into homes that had been cleansed and purified already by the new techniques. The tension and tortured complexity were being taken out of life, and the old habits of pre- industrial Britain were slowly creeping back.

Television planners, too, were proving more and more co-operative in subjecting their output to American standards of hygiene in the hope of promoting United States sales. This too meant a significant drop in the pollution level, and a return to man's earliest childhood. With a marked change of gear, Mr Stonehouse moved on to talk about technical innovations that could still further set the clock back to the age of innocence: what had been a global village could be transformed , with such devices, in- to a global cave. His eyes glinting, he spoke of long-life Forsyte Saga cassettes, which could be slotted into a television set and run for twenty-four hours a day for up to ten years.

Carried on a wave of throaty cheers and enthusiastically smashed bottles, Mr Stonehouse rose to an almost unbearable pitch of oratorical excitement, at one point looking up and raising a finger, as he spoke of This is Tom Jones shows being beamed into British homes directly from the moon. of seventeen pop channels on Bac radio, of three-dimensional Goths actually burning down British living rooms. A thunder of applause rolled through the hall as the Minister sat down, and after a short speech of thanks from Guy the Gorilla, the society's mascot and president, a motion was passed to hold next year's celebration in the chancel of St Paul's Cathedral with a barbecue and topless entertainment.