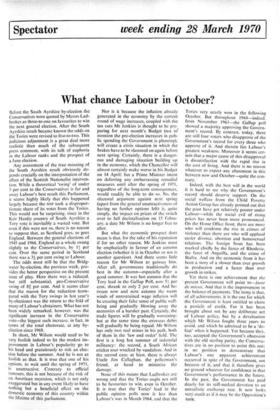 What chance Labour in October?

Before the South Ayrshire by-election the Conservatives were quoted by Messrs Lad- brokes as three-to-one on favourites to win the next general election. After the South Ayrshire result became known the odds on the Tories were revised to five-to-two. This judicious adjustment is a great deal more realistic than much of the subsequent press comment, with its talk of euphoria in the Labour ranks and the prospect of a June election.

Any assessment of the true meaning of the South Ayrshire result obviously de- pends crucially on the interpretation of the effect of the Scottish Nationalist interven- tion. While a theoretical 'swing' of under 3 per cent to the Conservatives is far and away Labour's best result this Parliament, it seems highly likely that this happened largely because the SNP took a dispropor- tionate share of its votes from the Tories. This would not be surprising, since in the Keir Hardie country of South Ayrshire a Tory vote is inevitably a wasted vote. But even if this were not so, there is no reason to suppose that, as Scotland goes, so goes England. Between the general elections of 1945 and 1966. England as a whole swung slightly to the Conservatives, by 13 per cent. Over the same period in Scotland there was a 3+ per cent swing to Labour.

The odds must still be that the Bridg- water by-election, the previous week, pro- vides the better perspective on the present state of play. Here there was a reduced, but still substantial, pro-Conservative swing of 8i- per cent. And it seems clear that the reason for the reduction (com- pared with the Tory swings in last year's by-elections) was the return to the fold of many of Labour's abstainers. What has not been widely remarked, however, was the significant increase in the Conservative vote—the biggest such increase. in fact, in terms of the total electorate, at any by- election since 1968.

In short, Mr Wilson would need to be very foolish indeed to let the modest im- provement in Labour's popularity go to his head and gratuitously to risk an elec- tion before the summer. And he is not as foolish as that. It is true that one of his options, to wait until the spring of 1971, is unattractive. Contrary to official rumours, this is not because of the risk of an American recession, which is not only exaggerated but in any event likely to have nothing but a beneficial effect on the domestic economy of this country within the lifetime of this parliament. Nor is it because the inflation already generated in the economy by the current round of wage increases, coupled with the tax cuts Mr Jenkins is thought to be pre- paring for next month's Budget (not to mention the pre-election increases in pub- lic spending the Government is planning), will create a crisis situation in which the brakes have to be slammed on again before next spring. Certainly, there is a danger- ous and damaging situation building up in the economy, which the Chancellor will almost certainly make worse in his Budget on 14 April: but a Prime Minister intent on deferring any embarrassing remedial measures until after the spring of 1971, regardless of the long-term consequences. would readily be able to do so. No. the electoral argument against next spring (apart from the general unattractiveness of having no further options left) is, quite simply. the impact on prices of the switch over to full decimalisation on 15 Febru- ary, a date Mr Wilson is no longer free to alter.

But what the economic prospect does mean is that. for the sake of his reputation if for no other reason, Mr Jenkins must be emphatically in favour of an autumn election (whether it is in October or not is another question). And there seems little reason for Mr Wilson to gainsay him. After all, governments traditionally do best in the autumn—especially after a good summer. It was last autumn that the Tory lead in the Gallup Poll, now 52 per cent. shrank to only 2 per cent. And be- tween now and next autumn the warm winds of unrestrained wage inflation will be creating their false sense of public well- being and gradually blowing away the memories of a harsher past. Certainly, the trade figures will be gradually worsening; but at the same time the overseas debts will gradually be being repaid. Mr Wilson has only two real mines in his path, both of them in the law and order' field. The first is a long hot summer of industrial militancy: the second, a South African cricket tour wrecked by vandalism. And in the second case, at least, there is always Uncle Jim Callaghan, the policeman's friend, at hand to minimise the damage.

None of this means that Ladbrokes are wrong and that the Tories ought not still to be favourites to win, even in October. It is true that the Tories' lead in the public opinion polls now is less than Labour's was in March 1964, and that the Tories very nearly won in the following October. But throughout 1964—indeed, from November 1963—the Gallup poll showed a majority approving the Govern- ment's record. By contrast, today, there are still four voters who disapprove of the Government's record for every three who approve of it. And therein lies Labour's greatest weakness. Moreover it seems cer- tain that a major cause of this disapproval is dissatisfaction with the rapid rise in the cost of living. And there is no reason whatever to expect any abatement in this between now and October—quite the con- trary.

Indeed, with the best will in the world it is hard to see why the Government's record should deserve support. On the social welfare front the Child Poverty Action Group has already pointed out that the poor have got relatively poorer under Labour—while the social evil of rising prices has never been more pronounced. On the Home Office front, there are more who will condemn the rise in crimes of violence than there are who will applaud easier divorce. abortion and homosexual relations. The foreign front has been marked chiefly by the fiasco of Rhodesia, the farce of Anguilla, and the crime of Biafra. And on the economic front it has been a story of a slower than ever growth in production and a faster than ever growth in strikes.

Yet there is one achievement that the present Government will point to—fa/tie de mieux. And that is the improvement in the balance of payments. The irony is that, of all achievements, it is the one for which the Government is least entitled to claim a particle of credit. For it has been brought about not by any deliberate act of Labour policy, but by a devaluation which Mr Wilson fought three years to avoid. and which he admitted to be a 'de- feat' when it happened. Yet because they, too, accepted the Government's obsession with the old sterling parity, the Conserva- tives are in no position to point this out: in no position to demonstrate that Labour's one apparent achievement occurred in spite of the Government, not because of it, and that it therefore gives no ground whatever for confidence in that Government's performance in the future. In the past, the Government has paid dearly for its stiff-necked devotion to an unrealistic exchange rate. It now looks very much as if it may be the Opposition's turn.