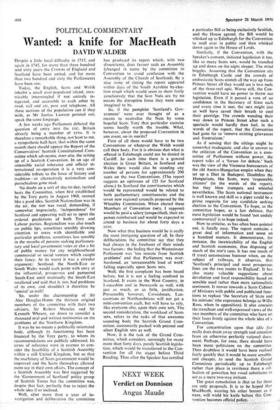 Wanted: a knife for MacHeath

Today, the English, Scots and Welsh inhabit a small over-populated island, inex- tricably intermingled if not entirely in- tegrated, and accessible to each other by road, rail and air, post and telephone. All these sections of the population can if they wish, as Mr Justice Lawton pointed out, speak the same language.

A few weeks ago Parliament debated the question of entry into the EEC, Britain already being a member of EFTA. It is therefore a remarkable thing, not least to me, a sympathetic half-Scot, that within the same month there should appear the Report of the Conservatives' Scottish Constitutional Com- mittee which advocates, inter alia, the setting up of a Scottish Convention. In an age of ostensible racial tolerance and official in- ternational co-operation it is a very con- siderable tribute to the force of history and tradition—or alternatively nationalism and parochialism gone mad. No doubt on a sort of day-to-day, tactical basis the Committee, when first established by the Tory party in August 1968, seemed like a good idea. Scottish Nationalism was in the air, the SNP was vocal, demanding, if somewhat imprecisely, 'independence' for Scotland and appearing well set to upset the ordered predictions of both Tory and Labour parties. Regionalism was also much on public lips, sometimes sensibly drawing attention to areas with identifiable and particular problems, sometimes less sensibly in the mouths of persons seeking parliamen- tary and local government votes or else a bit of public money for any neighbourhood commercial or social venture which caught their fancy. At its worst it was a circular argument: Scotland, the North-East or South Wales would each point with envy at the influential, prosperous and pampered South-East until eventually the South-East retaliated and said that it, too, had problems of its own, and shouldn't it therefore be 'special' as well?

So, under the chairmanship of Sir Alec Douglas-Home the thirteen original members of the committee with their two advisers, Sir Robert Menzies and Sir Kenneth Wheare, sat down to consider a thousand oral and written testimonies on the problems of the Northern Kingdom.

It was by no means a politically orientated body, although its functioning has been financed by the Tory party, to whom its recommendations are publicly addressed. Its terms of reference were in essence to con- sider the feasibility of a Scottish Assembly within a still United Kingdom, but so that the machinery of Scots government would be improved and the Scots themselves allowed more say in their own affairs. The concept of a Scottish Assembly was first suggested by the 'Government of Scotland' policy group of Scottish Tories but the committee was, despite that fact, perfectly free to reject the whole idea if so inclined.

Well,. after more than a year of in- vesttgation and deliberation the committee - - has produced its report which, with two dissentients, does favour such an Assembly (changed in name by the committee to Convention to avoid confusion with the Assembly of the Church of Scotland). By a nice irony of timing the report appeared within days of the South Ayrshire by-elec- tion result which would seem to show fairly conclusively that the Scot Nuts are by no means the disruptive force they were once imagined to be.

So, if the pamphlet 'Scotland's Gov- ernment' were ever thought of as a means to neutralise the Nats by some hopeful Scots Tory that particular exercise seems hardly worth the trouble. What, however, about the proposed Convention in any event, on its merits?

First of all there would have to be two Conventions or whatever the Welsh would call their body. For it is obvious that what is offered in Edinburgh could not be denied in Cardiff. So each time there is a general election in Great Britain, in Scotland and Wales there would also be standing any number of persons for approximately 200 seats on the two Conventions. (The report suggests an optimum of 125 for Scotland alone.) In Scotland the constituencies which would be represented would be related to both parliamentary constituencies and the seven new regional councils proposed by the Wheatley Commission. When elected these Members of Convention (Mcs, I suppose) would be paid a salary (unspecified), their ex- penses reimbursed and would be expected to attend to business for about forty days a year.

Now what that business would be is really the most intriguing question of all. In their deliberations the committee say that they had always in the forefront of their minds two factors : the feeling that the Westminster Parliament was 'too remote from Scottish problems' and that Parliament was over- burdened, an 'unreasonable load of work' falling especially upon Scots NIPS.

Well, the first complaint has been heard before, but it is not a feeling confined to Scotland. It exists in the West Country, in Lancashire and in Newcastle as well, with just as much, or as little, justification. Presumably however, Cornishmen, Lan- castrians or Northumbrians will not get a mini-convention each, but will have to rely, like everyone else, upon their own MPS. The second consideration, the workload of Scots MPs, refers to the tasks of that awesome sounding body the Scottish Grand Com- mittee, customarily packed with pressed and silent English MPS as well.

Now, it is the task of the Grand Com- mittee, which considers, seemingly for many more than forty days, purely Scottish legisla- tion, which would be transferred to the Con- vention for all the stages before Third Reading. Thus after the Speaker has certified

a particular Bill as being exclusively Scottish, and the House agreed, the Bill would be whisked up to Edinburgh for the Convention to mull over in public and then whisked down again to the House of Lords.

Similarly, if the Convention, with the Speaker's consent, initiated legislation it too,

up and down on the night sleeper. The mind boggles. Assuming that the Convention sits in Edinburgh Castle and the crowds of enthusiastic Scots stretch all the way up from Princes Street all they would see is two reels of the three-reel epic. Worse still, the Con- vention would have no power to throw out legislation. Even if it passed a vote of no confidence in the Secretary of State each and every ,time it met, the mcs might just as well have saved their breath to cool their porridge. The crowds wending their way down to Princes Street after such a spectacle would hardly then feel, in the words of the report, that the Convention had gone far to 'remove existing grievances and frustrations: As if sensing that the sittings might be somewhat inadequate, and also in answer to the criticism of the Convention as a com- mittee of Parliament without power, the report talks of a 'forum for debate.' Such was the view of the Viennese bureaucrats of the old Austro-Hungarian empire when they set up a Diet in Budapest. Doubtless the Hungarians, like Scots, were 'responsible citizens' (in the words of the report), but they blew trumpets and whistled nevertheless. The Scots national instrument is well known and skill as a piper could be a prime requisite for any candidate seeking election to the Convention. To hope, as the committee hopes, as a last defence, that most legislation would be found 'not unduly controversial' is to hope indeed.

Now to criticise, as has often been pointed out, is fatally easy. The report contains a great deal of information and sense on a hundred matters. It demonstrates, for instance, the inextricability of the English and Scottish economies, thus disposing of

much of the sr P'S case. It has one touch of (I trust) unconscious humour when, on the

subject of railways, it observes, that 'Scotland's principal and most prosperous lines are the two routes to England'. It has also many valuable suggestions about devolution and local responsibility based on sensible need rather than mere nationalistic sentiment. It moves towards a Scots Cabinet of Ministers with public and publicised func- tions to replace 'the Secretary of State and his minions' (the expression belongs to Willie Ross, when in opposition). It also contains the trenchant and well-expressed views of the

two members of the committee who have set their faces firmly against the whole idea of a Convention.

For concentration upon that idee fixe really does drain away strength and attention from an otherwise perfectly rational docu- ment. Perhaps, for once, there should have been more -politicians on the committee. Then doubtless it would have been realised fairly quickly that it would be more sensible, and cheaper, to send the Scottish Grand Committee periodically up to Edinburgh rather than place in residence there a col- lection of powerless but vocal substitutes to act as a mere two-way irritant.

The great consolation is that so far these are only proposals. It is to be hoped that MacHeath, wearing his other bonnet as it were, will wield his knife before this Con- vention becomes official policy.