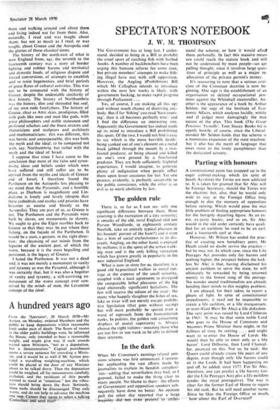 The Government has at long last, I under- stand, decided to bring in a Bill to prohibit the cruel sport of catching fish with barbed hooks. A number of backbenchers have been urging this humane reform for some time, but private members' attempts to make fish- ing illegal have met with stiff opposition. However, the Angling (Prohibition) Bill which Mr Callaghan intends to introduce within the next few weeks is likely, with government backing, to make rapid progress through Parliament ...

Yes, of course, I am making all this up; and without much chance of deceiving any- body. But if for 'fishing' you read 'hare cours- ing', then it all becomes perfectly true: and I find the difference an interesting one. Apparently the Government has indeed made up its mind to introduce a Bill prohibiting this sport. Of the two, I would not find it easy to say which is the more horrible death: being yanked out of one's element on a metal hook jabbed through the mouth by a two- footed predator, or being chased and killed on one's own ground by a fourfooted predator. They are both sufficiently frightful experiences, I would imagine, to generate plenty of indignation when people inflict them upon lesser creatures for fun. Yet one process, evidently, is perfectly acceptable to the public conscience, while the other is so evil as to merit abolition by law.

There is, so far as I can see, only one significant difference between them. Hare coursing is the recreation of a tiny minority; it smacks of the old, rural England (did not Parson Woodforde, in eighteenth century Norfolk, take an entirely typical pleasure in his hounds' pursuit of the hare?) and it even has a hint of social exclusiveness to its dis- credit. Angling, on the other hand, is enjoyed by millions; it is the sport of the urban work- ing man and is the only killing recreation which has grown greatly in popularity in the new industrial England.

What is now in store for us, therefore, is a good old hypocritical wallow in moral out- rage at the expense of the small minority, coupled with a tacit agreement to disregard the comparable lethal pleasures of the big (and electorally significant) battalions. The few will receive the odium of the state: the many who happily slaughter the fishes of sea, lake or river will not merely escape prohibi- tive legislation (that goes without saying) but will most probably be spared even a word of reproach from the humanitarian ranks. In politics, the golden rule concerning displays of moral superiority is. Always choose the right victims—meaning those who are too few or too weak to be able to defend their interests.

In the dark When Mr Crossman's earnings-related pen- sions scheme was first announced. I remem- ber applauding the vast efforts made by journalists to explain its fiendish complexi- ties—adding that nevertheless they had, so I guessed, failed to make the thing clear to many people. No blame to them : the efforts of Government and opposition speakers sub- sequently have done no better. An opinion poll the other day reported that a large inajofify -did--not--even pretend-to 'under-

stand the scheme, or how it would affect them peftonally. In fact this massive meas.

ure could reach the statute book and stilt not be understood by most people—an tip. palling thought, since it involves large clues. Lions of principle as well as a major re- allocation of the private person's money.

It's reassuring to note that a serious criti- cism of the Crossman doctrine is now be- ginning. One sign is the establishment of an organisation to defend occupational pen- sions against the Whitehall steamroller. An- other is the appearance of a book by Arthur Seldon, the sage of the Institute of Eco- nomic Affairs, which analyses lucidly, wittily and (I judge) most damagingly the true nature of the plan. This book (The Great Pensions 'Swindle, Tom Stacey Books 6s) is openly hostile, of course, since the Liberal- minded Mr Seldon holds that the scheme is a monstrous expansion of the state machine: but it also has the merit of language that owes more to the lively pamphleteer than the desiccated actuary.

A constitutional point has cropped up in the eager cabinet-making which (in spite of South Ayrshire) the Tories are now addicted to. It is taken for granted that Sir Alec will be Foreign Secretary, should the Tories win the election: but, also, that he 'would only wish to stay at the Foreign Office long enough to dim the memory of opposition before retiring. Which would pose the nice little problem of finding appropriate honours for the benignly departing figure. As an ex- PM, ex-party leader, and so on, Sir Alec would in the old order certainly have quali- fied for an earldom; he used to be an earl, and a fourteenth earl at that.

However, Mr Wilson has ended the prac- tice of creating new hereditary peers. Mr Heath could no doubt revive the practice— but he may not. In which case, since the Life Peerages Act provides only for barons and nothing higher, the prospect before the luck- less Sir Alec is that, having disclaimed his ancient earldom to serve the state, he will ultimately be rewarded by being returned merely to the lowest rung of the peerage. No wonder sound traditionalists are already bending their minds to this weighty problem.

I am pleased, for their sakes, to report a gleam of light. In spite of constitutional impediments. it need not be impossible to create a life earldom, or a life marquessate, or even (God Bless Sir Alec) a life dukedom. The very point was raised by Lord Clitheroe in 1963: 'It may be that some noble Lord who goes to the House of Commons and becomes Prime Minister there might, in the fullness of time, be retiring . . . and might want to re-enter the House of Lords. He would then be able to enter only as a life baron'. Lord Dilhorne, then Lord Chancel- lor. pounced on this. Not so, he said: the Queen could already create life peers of any degree, even though only life barons could sit in the Lords. It had been happening on

and off, he added, since 1377. For Sir Alec, therefore, one can predict a life barony (un- der the Life Peerages Act) plus a life earldom (under the royal prerogative). The way is clear for the former Earl of Home to regain his old rank. But he will need another name. Since he likes the Foreign Office so much, hovrahout the Earl of Overseas?