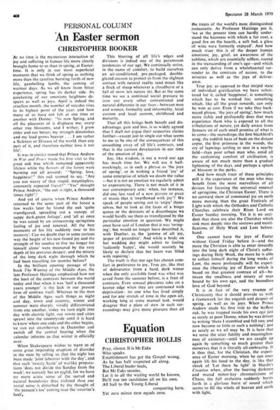 At no time is the mysterious interaction of joy and suffering in human life more clearly brought home to us than in spring, at Easter- time. It is only in our most superficial moments that we think of spring as nothing more than the carefree bursting forth of new life, gambolling lambs, the coming of warmer days. As we all know from bitter experience, spring has its darker side. Its quickening of our emotions heightens de- spairs as well as joys. April is indeed the cruellest month, the number of suicides rises to its highest point of the year, and how many of us have not felt at one time or another with Donne: "tis now Spring, and all the pleasures of it displease me; every other tree blossoms, and I wither; I grow older and not better; my strength diminishes and my load grows heavier .. I am rather a Sickness or Disease of the world, than any part of it, and therefore neither love it nor life'.

It was in similar mood that Prince Andrew in War and Peace made his first visit to the great oak tree which remained apparently lifeless while the flowers of the forest were bursting out all around: "'Spring, love, happiness!" this oak seemed to say. "Are you not weary of that stupid, meaningless, constantly repeated fraud?" "Yes" thought Prince Andrew, "the oak is right, a thousand times right": And yet of course when Prince Andrew returned to the same part of the forest a few weeks later he found the oak 'quite transfigured, spreading out a canopy of sappy dark-green foliage', and 'all at once he was seized by an unreasoning springtime feeling of joy and renewal. All the best moments of his life suddenly rose to his memory'. Can we doubt that in some curious way the height of his new-found joy and the strength of his resolve to live `no longer for himself alone' were measured by the very depth of his previous despair, and the misery of the long dark night through which he had been travelling for months before?

In the brilliant opening passage of his book The Waning of the Middle Ages, the late Professor Huizinga emphasised how not the least of the contrasts between the world today and that when it was 'half a thousand years younger' is the lack in our present lives of contrast itself. Whereas to the men of the Middle Ages, such things as night and day, town and country, winter and summer were sharply, vividly differentiated from one another, today we turn night into day with electric light, our towns and cities sprawl into the countryside until it is hard to know where one ends and the other begins, we can eat strawberries in December and switch off the central heating when the calendar informs us that winter is officially over.

When Shakespeare wishes to warn us of some great impending eruption of disorder in the state by telling us that the night has been made 'joint labourer with the day', and that such 'sweaty haste' of warlike prepara- tions 'does not divide the Sunday from the week', we scarcely bat an eyglid, for we have no more acute sense of the sacred and

This blurring of all life's edges and divisions is indeed one of the paramount tendencies of our age. We continually strive, in the name of comfort, to build ourselves an air-conditioned, pre-packaged, double- glazed cocoon to protect us from the slightest contact with natural reality (and moan like a flock of sheep whenever a cloudburst or a fall of snow lets nature in). But at the same time we see a continual social pressure to iron out every other conventional and natural difference in our lives—between men and women, formality and informality, local custom and local custom, childhood and maturity.

That all this brings both benefit and dis- advantage, gain and loss, is so widely agreed that I shall not argue their respective claims further—except just to single out what seems to me to be one of the consequences of this smoothing away of all life's contrasts, and that is the curious devaluation in our time of the emotion of joy.

Joy, like wisdom, is not a word our age has much time for. We will use it half- mockingly, as in such a phrase as 'the joys of spring', or in wishing a friend `joy' of some enterprise of which we doubt the value —but it is not an emotion we regularly admit to experiencing. There is not much of it in our contemporary arts: when, for instance, did one last read of a new picture or piece of music that it 'overflowed with joy'? We speak of people setting out to 'enjoy' them- selves, but to look at the faces of a bingo queue or the denizens of a discotheque we would hardly see them as transfigured by the particular emotion in question. We might once have said of London that it was 'swing- ing', but would no longer have described it, with Dunbar, as the `gemme of all joy, jasper of jocunditie'. And while a bride on her wedding day might admit to feeling 'radiantly happy', she would scarcely be likely to declare that her heart was 'filled with rejoicing'.

The truth is that our age has chosen corn, fort in preference to joy. True joy, like that of deliverance from a hard, dark winter when the only available food was what was saved from the summer before, is a fruit of contrasts. Even sensual pleasures take on a keener edge when they are contrasted with deprivation : no one who has lived simply and for any stretch of time in the open air, working long at some manual task, would disagree that a plate of stew in such sur- roundings may give more pleasure than all

the treats of the world's most distinguished restaurants. As Professor Huizinga put it, 'we at the present time can hardly under- stand the keenness with which a fur coat, a good fire on the hearth, a soft bed, a glass of wine were formerly enjoyed'. And how much truer this is of the deeper human emotions; joy, grief, an awareness of the sublime, which are essentially selfless, rooted in the transcending of one's ego—and which can only derive from a wholehearted sur- render to the contrasts of nature, to the miseries as well as the joys of deliver- ance.

True joy, as opposed to that insipid state of individual gratification we have substi- tuted for it, called 'happiness', is something which has to be worked for; something which, like all the great rewards, can only be won at cost. Even if we take that hack- neyed phrase, 'the joys of spring', how much more richly and profoundly does that man experience them who is exposed to all the tribulations of nature, yet daily aware from January on of each small promise of what is to come—the snowdrops, the first blackbird's song, the reddish haze of buds on the distant copse, the first primrose in the woods, the cry of lapwings settling to nest in a nearby field—than poor urban man who, amid all the cushioning comfort of civilisation, is aware of not much more than a gradual lightening of the days, and perhaps a splash of blossom in the parks.

And how much truer of these principles still is the experience of the man who may benefit from the most marvellous of all devices for focusing the universal renewal of springtime, the Christian Easter. There is no outward show of communal joy on earth more moving than the great Festivals of Light with which the Orthodox and Catholic Churches celebrate their Risen Lord on Easter Sunday morning. Yet it is no acci- dent that these are also the Churches which sink most deeply into the sorrows and morti- fications of Holy Week and Lent before- hand.

One cannot have the joys of Easter without Good Friday before it—and the more the Christian is able to enter inwardly into the long dark night of Christ's suffer- ings during Holy Week, the more he is able to collect himself during the long weeks of Lent, the more profoundly will he experi- ence the liberating joy of Easter which is based on that greatest contrast of all—be- tween the smallness and misery of man bound by his own ego, and the boundless love of God beyond.

It is in fact of the very essence of Christianity that it should provide us with a framework for the anguish and despair of spring, as well as its joys. When Prince Andrew made his first visit to the leafless oak, he was trapped inside his own ego just as surely as poor Donne, when he was driven to writing 'there I stumbled and fell too; and now become so little or such a nothing'; just as surely as we all may be. It is here that we sense the utter futility and meaningless- ness of existence—until we are caught up again by something so much greater than ourserves that it is literally all-embracing. It is thus that, for the Christian, the experi- ence of Easter morning, when he can once again lift his head to the day, is like that shock of 'Let there be light' in Haydn's Creation when, after the heaving darkness and muted minor-key chromaticisms of Chaos, the full orchestra suddenly bursts forth in a glorious burst of sound which seems to fill the whole of heaven and earth with light,