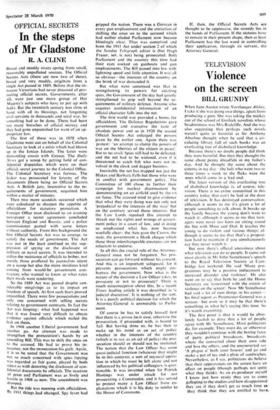 In the steps of Mr Gladstone

Broad and muddy rivers spring from small, reasonably unpolluted sources. The Official Secrets Acts (there are now two of them), broad and very muddy, originate from a single Act passed in 1889. Before that the in- nocent Victorians had never dreamed of pro- tecting official secrets. Governments, after all, were just one more group of Her Majesty's subjects who have to put up with leaks. But the twentieth century was close at hand with all its blessings, not forgetting civil servants in thousands and total war. So something had to be done. There had been too many breaches of official secrecy and they had gone unpunished for want of an ap- propriate law.

The first of these was in 1858 when Gladstone went out on behalf of the Colonial Secretary to look at a crisis which had blown up in the Ionian Islands. The latter were demanding enosis with Greece. The Daily News got a scoop by getting hold of con- fidential dispatches which were on their official, secret journey to the Colonial Office. The Colonial Secretary was furious. The leaker was prosecuted for larceny of the documents (there being no Official Secrets Act). A British jury, insensitive to the re- quirements of government, acquitted him within a matter of minutes.

Then two more scandals occurred which were calculated to sharpen the appetite of officialdom for statutory protection. A Foreign Office man disclosed to an evening newspaper a secret agreement concluded between England and Russia; and a police commissioner parted with some letters without authority. From this background the first Official Secrets Act was to emerge, to satisfy the needs of government. The Act was not in the least confined to the sup- pression of spying or the disclosure of military or naval secrets. It was intended to stiffen the resistance of officials to bribes, not merely those proffered by journalists intent on a scoop but also the more insidious kind coming from would-be government con- tractors who wanted to know at what rates their rivals were tendering.

So the 1889 Act was passed despite con- siderable misgivings as to its impact on freedom of speech. At first such fears proved unjustified. There were few prosecutions and only one concerned with selling secrets relating to government contracts. In fact the Act was limping: what had happened was that it was found very difficult to obtain evidence against officials which nailed the leak on them.

In 1908 another Liberal government had another go. An attempt was made to strengthen the prosecution's hands by an amending Bill. This was to shift the onus on to the accused. He had to prove his in- nocence. not the prosecution his guilt. Again, it is to be noted that the Government was not so much concerned with spies (spying was regarded as fair game, played by both sides) as with deterring the disclosure of con- fidential documents by officials. The reaction of press and Parliament was as lively and hostile in 1908 as now. The amendment was

But the tide was running with officialdom. By 1911 things had changed. Spy fever had

gripped the nation. There was a German in every gun emplacement and the attraction of shifting the onus on to the accused which had earlier eluded Parliament now became blindingly clear. Thus was conceived and born the 1911 Act under section 2 of which the Sunday Telegraph editor is (but Hugh Fraser, MP, is not) being prosecuted. Both Parliament and the country this time had their eyes cocked on gunboats and gun emplacements. The Bill passed into law with lightning speed and little attention. It was all so obvious—the interests of the country on the brink of war demanded it.

But what went unnoticed was that in strengthening its powers for catching spies, the Government of the day had quietly strengthened its grip well beyond the re- quirements of military defence. Anyone who acquires confidential information of an official character falls into the net.

The first world war provided a bonus for officialdom. The Defence Regulations gave government and executive the taste of absolute power and so in 1920 the second Official Secrets Act enlarged the powers given by the earlier one. Again there was protest: 'an attempt to clamp the powers of war on the liberties of the citizen in peace'. But to no avail. Spies still had to be defeated. and the net had to be widened, even if it threatened to catch fish who were not in- volved in the cloak and dagger business.

Inevitably the net has trapped not just the Blakes and Barbara Fells but those who were in conflict with government policy. The Committee of 100 chose to further their campaign for nuclear disarmament by demonstrating on an airfield used by the us air force. The accused tried to give evidence that what they were doing was not only not 'prejudicial to the interests of the 'state' but on the contrary served those interests. But the Law Lords repulsed this attempt to thrash out the rights and wrongs of govern- ment policy in a court of law, and in doing so emphasised what has now become woefully clear: the Acts gave the Crown. the state, the government a blank cheque which those three interchangeable creatures are not reluctant to endorse.

In all this the crucial role of the Attorney- General must not be forgotten. No pro- secution can go forward without his consent. And this is an important safeguard. for it prevents prosecutions which might em- barrass the government. Now what is the nature of the decision a Law Officer takes, to prosecute or not to prosecute? There is much misconception about this. In a recent Times leading article it was described as 'a judicial discretion'. It is nothing of the sort. It is a purely political decision for which the Attorney-General is answerable to Parlia- ment.

Of course he has to satisfy himself first that there is a prima facie case, otherwise the prosecution. if proceeded with, is bound to fail. But having done so, he has then to make up his mind as an act of policy whether in the interests of the country (which is to say as an act of policy) the pro- secution should or should not be instituted. The notion that the Law Officer has some quasi-judicial function (whatever that might be in this context), a sort of mystical opera- tion in which he must be left alone and not influenced by his political colleagues, is ques- tionable. It was invented when Sir Patrick Hastings was under attack for not prosecuting a Communist, and it has served to protect many a Law Officer from ex- planations which it is his duty to render to the House of Commons.

If, then, the Official Secrets Acts are thought to be oppressive, the remedy lies in the hands of Parliament. If the statutes have to remain in their present shape, that at least Parliament has the last word in controlling their application, through its servant, the Attorney-General.