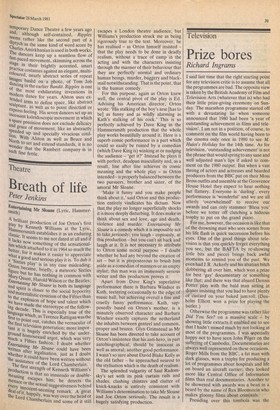 Entertaining Mr Sloane (Lyric, Hammersmith) A brilliant production of Joe Orton's first Play by Kenneth Williams at the Lyric, Hammersmith establishes it as an enduring Classic . It seems to me not dated at all and if it lacks now something of the sensationalism which attached to it in 1964 so much the better, for it makes it easier to appreciate What a good andserious play it is. To dub it a 'Sixties play' is in any case misleading;. Orton became, briefly, a meteoric Sixties figure but he has nothing in common with Mary Quant, Harold Wilson or the Beatles; Entertaining Mr Sloane in both its language and spirit is closer to the social hypocrisy and materialistic cynicism of the Fifties than to the explosion of hope and talent which vve have made the stereotype of the following decade. This is especially true of the language Which, as Terence Rattigan was the first to point out, catches the vernacular of the first television generation; more important it is hugely enriched by the underground homosexual argot, which was very Much a Fifties fashion. I doubt whether Entertaining Mr Sloane could have been Written after legalisation, just as I doubt Whether it could have been written without the assistance of the Lord Chamberlain. The first strength of Kenneth Williams's production is that no innuendo or doubleMeaning escapes him; he detects the menace or the sexual suggestiveneSs behind every innocent-seeming remark. A great deal of it, happily, was way over the head ot the Lord Chamberlain and some of it still escapes a London theatre audience, but Williams's production struck me as being rigorously true to the text. Moreover, he has realised — as Orton himself insisted — that the play needs to be done in deadly realism, without a trace of camp in the acting and with the characters insisting through the manner of their behaviour that they are perfectly normal and ordinary human beings, murder, buggery and blackmail notwithstanding. That is the point, that is the human comedy.

For this purpose, again as Orton knew well, the central pivot of the play is Ed. Advising his American director, Orton wrote: 'His stalking of the boy's arse [has to be] as funny and .as wildly alarming as Kath's stalking of his cock.' This is so , perfectly achieved by Dave King in the Hammersmith production that the whole play works beautifully around it. Here is a superb comic performance in a part which could so easily be ruined by a comedian (which Dave King is) winking at or nudging the audience — 'get it?' Instead he plays it with perfect, deadpan masculinity and, as a result, line after line achieves its comic meaning and the whole play — as Orton intended — is properly balanced between the two pursuers, brother and sister, of the amoral Mr Sloane.

'Make it funny and you make people think about it,' said Orton and this production entirely vindicates his dictum. Now that\ the play no longer superficially shocks it is more deeply disturbing. It does make us think about sex and love, age and death, violence and murder. Entertaining Mr Sloane is a comedy which it is impossible not to take..seriously; you laugh — copiously, at this production — but you can't sit back and laugh at it. It is not necessary to attribute to Orton some moral purpose — I doubt whether he had any beyond the creation of art — but it is preposterous to brush him aside as a comedian of manners or an empty stylist; this man was an immensely serious writer and this production proves it.

Apart from Dave King's superlative performance there is Barbara Windsor as Kath, teetering occasionally to the edge of music hall, but achieving overall a fine and cruelly funny performance. Kath, supposedly based on Orton's mother, is a minutely observed character and Barbara Windsor exactly captures the netherland she inhabits between genteel and common, .proper and brazen. Glyn Grimstead as Mr Sloane has been directed to take account of Orton's insistence that his anti-hero, in part autobiographical, should be innocent as well as amoral; another good performance. I wasn't so sure about David Blake Kelly as the old father — he approached nearest to the stylisation which is the death of realism. The splended vulgarity of Saul Radomsky's set with its pink curtain rails and shades, clashing chintzes and clutter of knick-knacks is entirely consistent with Williams's determination to take Mr Sloane and Joe Orton seriously. The result is a hugely satisfying production.