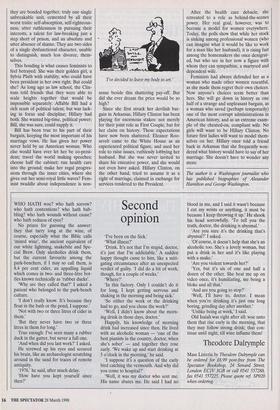 WHO HATH woe? who hath sorrow? who hath contentions? who hath bab- bling? who hath wounds without cause? who hath redness of eyes?

No prizes for guessing the answer: they that tarry long at the wine, of course, especially what the Bible calls `mixed wine', the ancient equivalent of our white lightning, snakebite and Spe- cial Brew. Only alcoholics drink them, but the current favourite among the park-benchers, if I may so call them, is 8.4 per cent cider, an appalling liquid which comes in two- and three-litre bot- tles known technically as 'rubber ducks'.

`Why are they called that?' I asked a patient who belonged to the park-bench culture.

`I don't really know. It's because they float in the bath or the pond, I suppose.'

`Not with two or three litres of cider in them.'

`But they never have two or three litres in them for long.'

True enough: I've seen many a rubber duck in the gutter, but never a full one.

`And when did you last work?' I asked.

He screwed up his eyes and scoured his brain, like an archaeologist scratching around in the sand for traces of remote antiquity.

`How have you kept yourself since then?' `I've been on the Sick.'

`Drink. It's not that I'm stupid, doctor, it's just that I'm addictable.' A sudden happy thought came to him, like a miti- gating circumstance after an unexpected verdict of guilty. 'I did do a bit of work, though, for a couple of weeks.'

`In this factory. Only I couldn't do it for long, I kept getting nervous and shaking in the morning and being sick.'

`So either the work or the drinking had to go, and you chose the work?'

`Well, I didn't know about the morn- ing drink in those days, doctor.'

Happily, his knowledge of morning drink had increased since then. He lived with an alcoholic woman — 'one of the best pianists in the country, doctor, when she's sober' — and together they rose early. 'We wake up and start drinking at 5 o'clock in the morning,' he said.

`I suppose it's a question of the early bird catching the vermouth. And why did you come to hospital?'

`Well, it was my doctor who sent me. His name abates me. He said I had no blood in me, and I said it wasn't because I cut my wrists or anything, it must be because I keep throwing it up.' He shook his head sorrowfully. `To tell you the truth, doctor, the drinking is abysmal.'

`Are you sure it's the drinking that's abysmal?' I asked.

`Of course, it doesn't help that she's an alcoholic too. She's a lovely woman, but put a drink in her and it's like playing with a snake.'

`Are you violent towards her?'

`Yes, but it's six of one and half a dozen of the other. She beat me up on video once, it's humiliating, me being a bloke and all that.'

`And are you going to stop?'

`Well, I'll have to, doctor. I mean when you're drinking it's just one long boring, grinding day after another.'

`Unlike being at work,' I said.

Old Isaiah was right after all: woe unto them that rise early in the morning, that they may follow strong drink; that con- tinue until night, till wine inflame them!