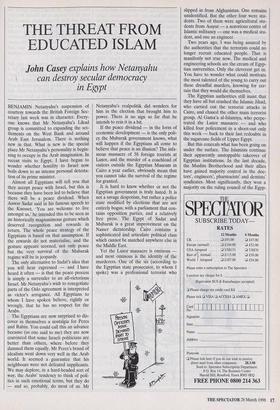 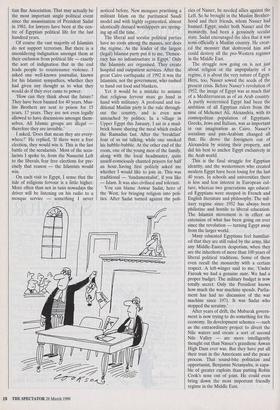 THE THREAT FROM EDUCATED ISLAM

BENJAMIN Netanyahu's suspension of courtesy towards the British Foreign Sec- retary last week was in character. Every- one knows that Mr Netanyahu's Likud group is committed to expanding the set- tlements on the West Bank and around Arab East Jerusalem. There is nothing new in that. What is new is the special place Mr Netanyahu's personality is begin- ning to occupy in the Arab imagination. In recent visits to Egypt, I have begun to wonder whether hostility to Israel now boils down to an intense personal detesta- tion of its prime minister. Almost all Egyptians will tell you that they accept peace with Israel, but this is because they have been led to believe that there will be a peace dividend. When Anwar Sadat said in his famous speech to the Knesset, 'You are welcome to live amongst us,' he intended this to be seen as an historically magnanimous gesture which deserved recognition and rewards in return. The whole peace strategy of the Egyptians is based on that assumption. If the rewards do not materialise, and the gesture appears scorned, not only peace but the very survival of the Mubarak regime will be in jeopardy. The only alternative to Sadat's idea that you will hear expressed — and I have heard it often — is that the peace process is simply a surrender to an all-victorious Israel. Mr Netanyahu's wish to renegotiate parts of the Oslo agreement is interpreted as victor's arrogance. All Egyptians to whom I have spoken believe, rightly or wrongly, that he has no respect for the Arabs.

The Egyptians are now surprised to dis- cover in themselves a nostalgia for Peres and Rabin. You could call this an advance because (as one said to me) they are now convinced that some Israeli politicians are better than others, where before they damned them equally. Mr Peres's brand of idealism went down very well in the Arab world. It seemed a guarantee that his neighbours were not defeated supplicants. We may deplore, in a hard-headed sort of way, the Arabs' tendency to think of poli- tics in such emotional terms, but they do — and so, probably, do most of us. Mr Netanyahu's realpolitik did wonders for him in the election that brought him to power. There is no sign so far that he intends to rein it in a bit.

If the peace dividend — in the form of economic development — is the only poli- cy the Mubarak government knows, what will happen if the Egyptians all come to believe that peace is an illusion? The infa- mous massacre of 58 foreign tourists at Luxor, and the murder of a coachload of visitors outside the Egyptian Museum in Cairo a year earlier, obviously mean that you cannot take the survival of the regime for granted.

It is hard to know whether or not the Egyptian government is truly hated. It is not a savage despotism, but rather a police state modified by elections that are not entirely bogus; with a parliament that con- tains opposition parties, and a relatively free press. The Egypt of Sadat and Mubarak is a great improvement on the Nasser dictatorship. Cairo contains a sophisticated and articulate political class which cannot be matched anywhere else in the Middle East.

Yet the Luxor massacre is ominous and most ominous is the identity of the murderers. One of the six (according to the Egyptian state prosecutor, to whom I spoke) was a professional terrorist who slipped in from Afghanistan. One remains unidentified. But the other four were stu- dents. Two of them were agricultural stu- dents from Assyut — a notorious centre of Islamic militancy — one was a medical stu- dent, and one an engineer.

Two years ago, I was being assured by the authorities that the terrorists could no longer recruit educated people. That is manifestly not true now. The medical and engineering schools are the cream of Egyp- tian universities. Only the cleverest get in. You have to wonder what could motivate the most talented of the young to carry out these dreadful murders, knowing for cer- tain that they would die themselves.

The Egyptian authorities still insist that they have all but crushed the Islamic Jihad, who carried out the terrorist attacks in Cairo, and chased the other main terrorist group, Al Gama'a al-Islamiya, who perpe- trated the Luxor massacre — and who killed four policement in a shoot-out only this week — back to their last redoubts in the sugarcane fields of Upper Egypt.

But this conceals what has been going on under the surface. The Islamists continue their apparently unstoppable takeover of Egyptian institutions. In the last decade, the Muslim Brotherhood and their allies have gained majority control in the doc- tors', engineers', pharmacists' and dentists' syndicates. Most significantly, they won a majority on the ruling council of the Egyp- tian Bar Association. That may actually be the most important single political event since the assassination of President Sadat in 1981, for lawyers have been at the cen- tre of Egyptian political life for the last hundred years.

Of course the vast majority of Islamists do not support terrorism. But there is a smouldering indignation amongst them at their exclusion from political life — exactly the sort of indignation that in the end leads people to countenance violence. I asked one well-known journalist, known for his Islamist sympathies, whether they had given any thought as to what they would do if they ever came to power: `How can they think about the future? They have been banned for 40 years. Mus- lim Brothers are sent to prison for 15 years, 17 years. They are not even legally allowed to have discussions amongst them- selves. All Islamic groups are illegal therefore they are invisible.'

I asked, 'Does that mean they are every- where?' He replied, 'If there were a free election, they would win it. This is the last battle of the secularists.' Most of the secu- larists I spoke to, from the Nasserist Left to the liberals, fear free elections for pre- cisely that reason — the Islamists would win.

On each visit to Egypt, I sense that the tide of religious fervour is a little higher. More often than not in taxis nowadays the driver will be listening on his radio to a mosque service — something I never noticed before. New mosques practising a militant Islam on the puritanical Saudi model and with highly regimented, almost identically dressed worshippers are spring- ing up all the time.

The liberal and secular political parties have no roots among the masses, nor does the regime. As the leader of the largest (legal) Islamist party put it to me, 'Democ- racy has no infrastructure in Egypt.' Only the Islamists are organised. They create hospital and outpatient services. After the great Cairo earthquake of 1992 it was the Islamists, not the government, who rushed to hand out food and blankets.

Yet it would be a mistake to assume that religious fervour must go hand in hand with militancy. A profound and tra- ditional Muslim piety is the rule through- out the country, and is even now untouched by politics. In a village in Upper Egypt this January, I sat in a mud- brick house sharing the meal which ended the Ramadan fast. After the 'breakfast' four of us sat talking, while one smoked his hubble-bubble. At the other end of the room, one of the young men of the family, along with the local headmaster, quite unself-consciously chanted prayers for half an hour, having first politely asked me whether I would like to join in. This was traditional — 'fundamentalist', if you like — Islam. It was also civilised and tolerant.

You can blame Anwar Sadat, hero of the West, for bringing religion into poli- tics. After Sadat turned against the poli- cies of Nasser, he needed allies against the Left. So he brought in the Muslim Brother- hood and their friends, whom Nasser had banned. Egypt, under both Nasser and the monarchy, had been a genuinely secular state. Sadat encouraged the idea that it was semi-officially a Muslim country. He creat- ed the monster that destroyed him and could destroy all the pro-Western regimes in the Middle East.

The struggle now going on is not just about religion or the unpopularity of a regime, it is about the very nature of Egypt. Here, too, Nasser sowed the seeds of the present crisis. Before Nasser's revolution of 1952, the image of Egypt was as much that of a Mediterranean as of an Arab country. A partly westernised Egypt had been the ambition of all Egyptian rulers from the time of Mehemet Ali. Alexandria, with its cosmopolitan population of Egyptians, Greeks, Jews and Italians, was as important in our imagination as Cairo. Nasser's socialism and pan-Arabism changed all that, He drove the foreigners out of Alexandria by seizing their property, and did his best to anchor Egypt exclusively in the Arab world.

This is the final struggle for Egyptian identity, and the westernisers who created modern Egypt have been losing for the last 40 years. In schools and universities there is less and less interest in European cul- ture, whereas two generations ago educat- ed Egyptians were steeped in French and English literature and philosophy. The mil- itary regime since 1952 has always been philistine and hostile to liberal education. The Islamist movement is in effect an extension of what has been going on ever since the revolution — turning Egypt away from the larger world.

Many educated Egyptians feel humiliat- ed that they are still ruled by the army, like any Middle-Eastern despotism, when they are the inheritors of more than 100 years of liberal political traditions. Some of them even recall the monarchy with a certain respect. A left-winger said to me, 'Under Farouk we had a genuine state. We had a proper budget. The military budget is now totally secret. Only the President knows how much the war machine spends. Parlia- ment has had no discussion of the war machine since 1971. It was Sadat who stopped the scrutiny.'

After years of drift, the Mubarak govern- ment is now trying to do something for the economy. Its development schemes — such as the extraordinary project to divert the Nile waters and create a sort of second Nile Valley — are more intelligently thought out than Nasser's grandiose Aswan High Dam ever was. But they have put all their trust in the Americans and the peace process. That sound-bite politician and opportunist, Benjamin Netanyahu, is capa- ble of greater exploits than putting Robin Cook's nose out of joint. He could even bring down the most important friendly regime in the Middle East.