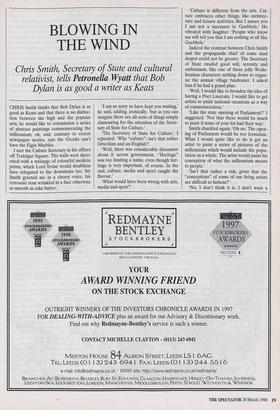 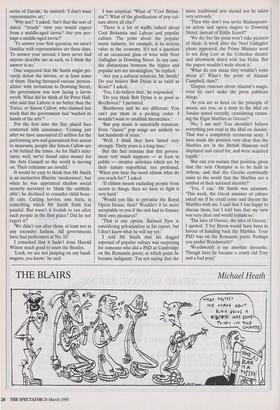 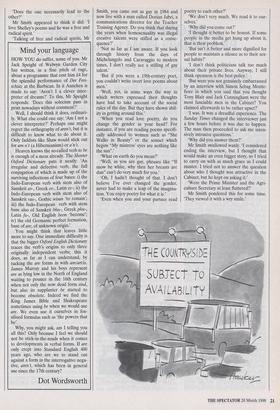 BLOWING IN THE WIND

Chris Smith, Secretary of State and cultural Dylan is as good a writer as Keats

CHRIS Smith thinks that Bob Dylan is as good as Keats and that there is no distinc- tion between the high and the popular arts; he would like to commission a series of abstract paintings commemorating the millennium; oh, and, contrary to recent newspaper stories, says the Greeks can't have the Elgin Marbles. I met the Culture Secretary in his offices off Trafalgar Square. The walls were deco- rated with a mélange of colourful modern prints, which Lord Irvine would doubtless have relegated to the downstairs loo. Mr Smith greeted me in a cheery voice, his retrousse nose wrinkled in a face otherwise as smooth as cake batter.

`I am so sorry to have kept you waiting,' he said, adding, ironically, but as you can imagine there are all sorts of things simply clamouring for the attention of the Secre- tary of State for Culture.'

`The Secretary of State for Culture,' I repeated. 'Why "culture"; isn't that rather Orwellian and un-English?'

`Well, there was considerable discussion about it across government. "Heritage" was too limiting a name, even though her- itage is very important, of course. In the end, culture, media and sport caught the flavour.'

`What would have been wrong with arts, media and sport?' `Culture is different from the arts. Cul- ture embraces other things, like architec- ture and leisure activities. But I assure you I am not a successor to Goebbels.' He vibrated with laughter. 'People who know me will tell you that I am nothing at all like Goebbels.'

Indeed the contrast between Chris Smith and the propaganda chief of some mad despot could not be greater. The Secretary of State exuded good will, serenity and enthusiasm, like one of those jolly Wode- housian characters settling down to organ- ise the annual village fundraiser. I asked him if he had a grand plan.

`Like the state opening of Parliament?' I suggested. 'Not that there would be much to paint if some of your lot had their way.' Smith chuckled again, 'Oh no. The open- ing of Parliament would be too formulaic. What I would quite like to do is get an artist to paint a series of pictures of the millennium which would include the popu- lation as a whole. The artist would paint his conception of what the millennium means to people.'

`Isn't that rather a risk, given that the "conceptions" of some of our living artists are difficult to fathom?'

No, I don't think it is. I don't want a series of Davids,' he insisted. 'I don't want representative art.'

`To answer your first question, we aren't familiar with representative art these days. To answer your second, I have never had anyone describe me as such, so I think the answer is no.'

One suspected that Mr Smith might pri- vately detest the luwies, or at least some of them. Having favoured various 'person- alities' with invitations to Downing Street, the government was now facing a luvvie revolt. What did he think of Sir Peter Hall, who said that Labour is no better than the Tories, or Simon Callow, who claimed last week that the government had 'washed its hands of the arts'?

For the first time the flat, placid face contorted with annoyance. `Corning just after we have announced £5 million for the performing arts and guaranteed free access to museums, people like Simon Callow are a bit behind the times. As for Hall's stric- tures, well, we've found extra money for the Arts Council so the world is moving on. Their criticisms are invalid.'

It would be easy to think that Mr Smith is an instinctive Blairite 'moderniser', but when he was appointed shadow social security secretary to 'think the unthink- able', he declined to consider child bene- fit cuts. Cutting luwies, one feels, is something which Mr Smith finds less painful. But wasn't it foolish to run after such people in the first place? Did he not regret it?

`We didn't run after them, at least not in any excessive fashion. All governments have had performers at No. 10.'

I remarked that it hadn't done Harold Wilson much good to court the Beatles.

`Look, we are not jumping on any band- wagons, you know,' he said. I was sceptical: 'What of "Cool Britan- nia"? What of the glorification of pop cul- ture above all else?'

`There is a lot of waffle talked about Cool Britannia and Labour and popular culture. The point about the popular music industry, for example, is its serious value to the economy. It's not a question of an occasional glass of wine with Noel Gallagher in Downing Street. In any case, the distinctions between the higher and popular arts are meaningless,' he replied.

`Are you a cultural relativist, Mr Smith? Do you believe Bob Dylan is as valid as Keats?' I asked.

`Yes, I do believe that,' he responded. `Do you think Bob Dylan is as good as Beethoven?' I persisted.

`Beethoven and he are different. You can't put them in a pecking order. I wouldn't want to establish hierarchies.'

`But pop music is essentially transient. Even "classic" pop songs are unlikely to last hundreds of years.'

`Well, I think they have lasted very strongly. Thirty years is a long time.'

But the fact remains that this govern- ment very much supports — at least in public — creative activities which are by their nature superficial, not profound. `When you hear the word elitism what do you reach for?' I asked.

`If elitism means excluding people from access to things, then we have to fight it very hard.'

`Would you like to privatise the Royal Opera House, then? Wouldn't it be more acceptable to you if the rich had to finance their own pleasures?'

`That is one option. Richard Eyre is considering privatisation in his report, but I don't know what he will say yet.'

I told Mr Smith that his dogged espousal of popular culture was surprising for someone who did a PhD at Cambridge on the Romantic poets; at which point he became indignant: `I'm not saying that the more traditional arts should not be taken very seriously.'

`Then why don't you invite Shakespeare- an actors and opera singers to Downing Street, instead of Eddie Izzard?'

`We do, but the press won't take pictures of them. A week after the Noel Gallagher photo appeared, the Prime Minister went to see King Lear at the Cottesloe theatre and afterwards dined with Ian Holm. But the papers wouldn't write about it.'

`What do you mean they wouldn't write about it? What's the point of Alastair Campbell, then?'

`Despite rumours about Alastair's magic, even he can't make the press publicise things.'

`As you are so keen on the principle of access, are you, as a story in the Mail on Sunday stated recently, considering return- ing the Elgin Marbles to Greece?'

`No, I am not! You shouldn't believe everything you read in the Mail on Sunday. That was a completely erroneous story. I have made the position very clear that the Marbles are in the British Museum well displayed and cared for, and were acquired legally.'

`But can you sustain that position, given that the next Olympics is to be held in Athens, and that the Greeks continually insist to the world that the Marbles are a symbol of their national identity?'

`Yes, I can,' Mr Smith was adamant. `This week, the Greek minister of culture asked me if he could come and discuss the Marbles with me. I said that I was happy to discuss them, but I told him that my view was very clear and would remain so.'

`Wordsworth is my absolute favourite. Though later he became a crusty old Tory and a bad poet.' `Does the one necessarily lead to the other?'

Mr Smith appeared to think it did: 'I love Shelley's poems and he was a free and radical spirit.' `Talking of free and radical spirits, Mr Smith, you came out as gay in 1984 and now live with a man called Dorian Jabri, a communications director for the Teacher Training Agency. Do you think that during the years when homosexuality was illegal creative talents were stifled as a conse- quence?'

`Not as far as I am aware. If you look through history from the days of Michelangelo and Caravaggio to modern times, I don't really see a stifling of gay talent.'

`But if you were a 19th-century poet, you couldn't write overt love poems about men.'

`Well, yes, in some ways the way in which writers expressed their thoughts have had to take account of the social rules of the day. But they have shown abil- ity in getting around this.'

`When you read love poetry, do you change the gender in your head? For instance, if you are reading poems specifi- cally addressed to women such as "She Walks in Beauty" or the sonnet which begins "My mistress' eyes are nothing like the sun".'

`What on earth do you mean?'

`Well, as you are gay, phrases like "If snow be white, why then her breasts are dun" can't do very much for you.'

`Oh, I hadn't thought of that. I don't believe I've ever changed the gender, never had to make a leap of the imagina- tion. You enjoy poetry for what it is.'

`Even when you and your partner read poetry to each other?'

`I thought it better to be honest. If some people in the media get hung up about it, that is their problem.'

`But isn't it better and more dignified for people to maintain a silence as to their sex- ual habits?'

`I don't think politicians talk too much about their private lives. Anyway, I still think openness is the best policy.'

`But were you not genuinely embarrassed by an interview with Simon Sebag Monte- fiore in which you said that you thought Tony Blair and Jack Cunningham were the most fanciable men in the Cabinet? You claimed afterwards to be rather upset?'

`I was. It was a dreadful experience. The Sunday Times changed the interviewer just a few hours before it was due to happen. The man then proceeded to ask me inten- sively intrusive questions.'

`Why did you answer them?'

Mr Smith swallowed wanly. 'I considered ending the interview, but I thought that would make an even bigger story, so I tried to carry on with as much grace as I could muster. I tried not to answer the question about who I thought was attractive in the Cabinet, but he kept on asking it.'

`Were the Prime Minister and the Agri- culture Secretary at least flattered?'

Mr Smith pondered this for some time. `They viewed it with a wry smile.'