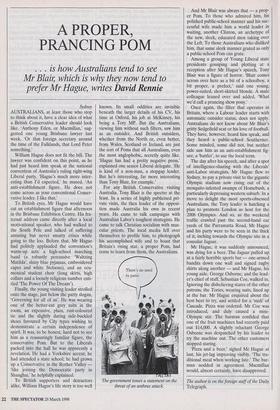 . . . is how Australians tend to see Mr Blair, which is why they now tend to

Sydney AUSTRALIANS, at least those who stop to think about it, have a clear idea of what a British Conservative leader should look like. 'Anthony Eden, or Macmillan,' sug- gested one young Brisbane lawyer last week. 'Or that foreign secretary around the time of the Falklands, that Lord Peter something.'

William Hague does not fit the bill. The lawyer was confident on this point, as he had just heard him speak at the national convention of Australia's ruling right-wing Liberal party. `Hague's much more inter- esting than I'd expected,' he mused. 'An anti-establishment figure. He does not come across as your conventional Conser- vative leader. I like that.'

To British eyes, Mr Hague would have cut an establishment figure that afternoon in the Brisbane Exhibition Centre. His fra- ternal address came directly after a local motivational speaker, who had walked to the South Pole and talked of suffering amusing but never smutty crises while going to the too. Before that, Mr Hague had politely applauded the convention's warm-up acts: a high-school marching band (a robustly percussive 'Waltzing Matilda', shiny blue pyjamas, embroidered capes and white Stetsons), and an ecu- menical student choir (long skirts, high collars and a loosely religious number enti- tled 'The Power Of The Dream').

Finally, the young visiting leader strolled onto the stage, just below the party slogan, `Governing for all of us'. He was wearing one of the better-cut grey suits in the room, an expensive, plain, rust-coloured tie and the slightly daring side-buckled shoes favoured by City types wishing to demonstrate a certain independence of spirit. It was, to be honest, hard not to see him as a reassuringly familiar figure, the conservative Porn. But to the Liberals packed into the hall he was apparently a revelation. He had a Yorkshire accent; he had attended a state school; he had grown up a Conservative in the Rother Valley 'like joining the Democratic party in Shanghai,' he helpfully explained.

To British supporters and detractors alike, William Hague's life story is too well known. Its small oddities are invisible beneath the larger details of his CV, his time at Oxford, his job at McKinsey, his being a Tory MP. But the Australians, viewing him without such filters, saw him as an outsider. And British outsiders, whether from the North or, even better, from Wales, Scotland or Ireland, are just the sort of Poms that all Australians, even the most anglophobic, secretly quite like. `Hague has had a pretty negative press,' explained one senior Liberal delegate. 'He is kind of a non-man, a stopgap leader. But he's interesting, far more interesting than Tony Blair, for example.'

For any British Conservative visiting Australia, Tony Blair is the spectre at the feast. In a series of highly publicised pri- vate visits, the then leader of the opposi- tion made Australia his own in recent years. He came to talk campaigns with Australian Labor's toughest strategists. He came to talk Christian socialism with mus- cular priests. The local media fell over themselves to profile him, to photograph his accomplished wife and to boast that Britain's rising star, a proper Pom, had come to learn from them, the Australians.

The government issues a statement on the threat of an anthrax attack. And Mr Blair was always that — a prop- er Pom. To those who admired him, his polished public-school manner and his suc- cessful wife made him a world leader in waiting, another Clinton, an archetype of the new, sleek, educated men taking over the Left. To those Australians who disliked him, that same sleek manner grated as only a public-school Pom can grate.

Among a group of Young Liberal state presidents gossiping and plotting at a reception after Mr Hague's speech, Tony Blair was a figure of horror. 'Blair comes across over here as a bit of a schoolboy, a bit proper, a prefect,' said one young, power-suited, short-skirted blonde. A male colleague leaned over and added, 'What we'd call a prancing show pony.'

Once again, the filter that operates in Britain, where a Labour leader starts with automatic outsider status, does not apply. Australians do not know about Mr Blair's gritty Sedgefield seat or his love of football. They have, however, heard him speak, and they heard a public-school Southerner. Some minded, some did not, but neither side saw him as an anti-establishment fig- ure, a 'battler', to use the local term.

The day after his speech, and after a spot of intelligence-sharing with the Liberals' anti-Labor strategists, Mr Hague flew to Sydney, to pay a private visit to the gigantic Olympic stadium now rising out of the mosquito-infested swamps of Homebush, a particularly depressing western suburb. In a move to delight the most sports-obsessed Australians, the Tory leader is hatching a plan to promote London as host for the 2008 Olympics. And so, as the weekend traffic crawled past the second-hand car yards of the Parramatta Road, Mr Hague and his party were to be seen in the thick of it, inching towards the Olympic site in a consular Jaguar.

Mr Hague, it was suddenly announced, was dying for a beer. The Jaguar pulled up at a fairly horrible sports bar — one-armed bandits down one wall and signed rugby shirts along another — and Mr Hague, his young aide, George Osborne, and the lead- er's chief of staff, Sebastian Coe, walked in. Ignoring the disbelieving stares of the other patrons, the Tories, wearing suits, lined up at the bar. Mr Hague enquired about the best beer to try, and settled for a 'midi' of Cascade. Pizza was ordered. Mr Coe was introduced, and duly caused a mini- Olympic stir. The barman confided that one of the fruit machines had recently paid out $14,000. A slightly reluctant George Osborne was despatched by his leader to try the machine out. The other customers stopped staring.

`Pizza and a beer,' sighed Mr Hague at last, his jet-lag improving visibly. 'The tra- ditional meal when working late.' The bar- man nodded in agreement. Macmillan would, almost certainly, have disapproved.

The author is on the foreign staff of the Daily Telegraph.