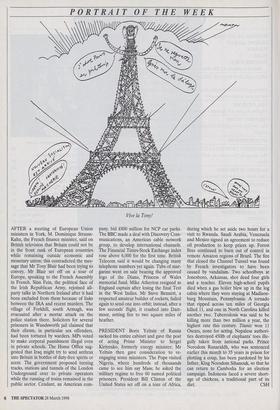 Al-r1.ER a meeting of European Union ministers in York, M. Dominique Strauss- Kahn, the French finance minister, said on British television that Britain could not be in the front rank of European countries while remaining outside economic and monetary union; this contradicted the mes- sage that Mr Tony Blair had been trying to convey. Mr Blair set off on a tour of Europe, speaking to the French Assembly in French. Sinn Fein, the political face of the Irish Republican Army, rejoined all- party talks in Northern Ireland after it had been excluded from them because of links between the IRA and recent murders. The village of Forkhill, south Armagh, was evacuated after a mortar attack on the police station there. Solicitors for several prisoners in Wandsworth jail claimed that their clients, in particular sex offenders, had been tortured by warders. MPs voted to make corporal punishment illegal even in private schools. The Home Office sug- gested that Iraq might try to send anthrax into Britain in bottles of duty-free spirits or scent. The government proposed turning tracks, stations and tunnels of the London Underground over to private operators while the running of trains remained in the public sector. Cendant, an American cotn- pany, bid £800 million for NCP car parks. The BBC made a deal with Discovery Com- munications, an American cable network group, to develop international channels. The Financial Times-Stock Exchange index rose above 6,000 for the first time. British Telecom said it would be changing many telephone numbers yet again. Tubs of mar- garine went on sale bearing the approved logo of the Diana, Princess of Wales memorial fund. Mike Atherton resigned as England captain after losing the final Test in the West Indies. Mr Steve Bennett, a respected amateur builder of rockets, failed again to send one into orbit; instead, after a few seconds' flight, it crashed into Dart- moor, setting fire to two square miles of heather.

PRESIDENT Boris Yeltsin of Russia sacked his entire cabinet and gave the post of acting Prime Minister to Sergei Kiriyenko, formerly energy minister; Mr Yeltsin then gave consideration to re- engaging some ministers. The Pope visited Nigeria, where hundreds of thousands came to see him say Mass; he asked the military regime to free 60 named political prisoners. President Bill Clinton of the United States set off on a tour of Africa, during which he set aside two hours for a visit to Rwanda. Saudi Arabia, Venezuela and Mexico signed an agreement to reduce oil production to keep prices up. Forest fires continued to burn out of control in remote Amazon regions of Brazil. The fire that closed the Channel Tunnel was found by French investigators to have been caused by vandalism. Two schoolboys at Jonesboro, Arkansas, shot dead four girls and a teacher. Eleven high-school pupils died when a gas boiler blew up in the log cabin where they were staying at Madison- burg Mountain, Pennsylvania. A tornado that ripped across ten miles of Georgia killed 11, and one in North Carolina killed another two. Tuberculosis was said to be killing more than two million a year, the highest rate this century. Titanic won 11 Oscars, none for acting. Nepalese authori- ties destroyed 4501b of elephants' toes ille- gally taken from national parks. Prince Norodom Ranariddh, who was sentenced earlier this month to 35 years in prison for plotting a coup, has been pardoned by his father, King Norodom Sihanouk, so that he can return to Cambodia for an election campaign. Indonesia faced a severe short- age of chickens, a traditional part of its