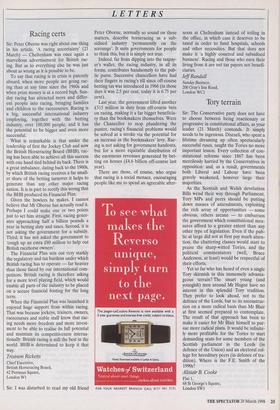 Sir: The Conservative party does not have to choose between being reactionary or progressive in constitutional affairs, as your leader (21 March) contends. It simply needs to be ingenious. Disraeli, who spent a lifetime dreaming up often spectacularly successful ruses, taught the Tories no more important lesson. Every collection of con- stitutional reforms since 1867 has been mercilessly harried by the Conservatives in opposition: and, as a result, governments both Liberal and Labour have been gravely weakened, however large their majorities.

As the Scottish and Welsh devolution Bills wend their way through Parliament, Tory MPs and peers should be putting down masses of amendments, exploiting the rich array of opportunities — sonic obvious, others arcane — to embarrass the government which constitutional mea- sures afford to a greater extent than any other type of legislation. Even if the pub- lic at large did not at first pay much atten- tion, the chattering classes would start to praise the sharp-witted Tories, and the political commentators (well, Bruce Anderson, at least) would be respectful of their efforts.

Yet so far who has heard of even a single Tory skirmish in this immensely advanta- geous terrain? The smart young (and youngish) men around Mr Hague have no interest in this splendid Tory tradition. They prefer to look ahead, not to the defence of the Lords, but to its reconstruc- tion on a more radical basis than Mr Blair at first seemed prepared to contemplate. The result of that approach has been to make it easier for Mr Blair himself to pur- sue more radical plans. It would be infinite- ly more profitable for the Tories to start demanding seats for some members of the Scottish parliament in the Lords (in defence of the Union) and an electoral col- lege for hereditary peers (in defence of tra- dition). Where is the F.E. Smith of the 1990s?