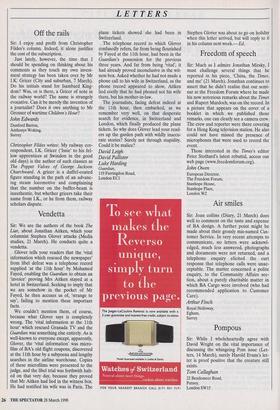 Sir: We are the authors of the book The Liar, about Jonathan Aitken, which your columnist Stephen Glover attacks (Media studies, 21 March). He conducts quite a vendetta.

Glover tells your readers that the 'vital information which rescued the newspaper' from libel defeat was a telephone record supplied 'at the 11th hour' by Mohamed Fayed, enabling the Guardian to obtain an `invoice' proving Mrs Aitken stayed at a hotel in Switzerland. Seeking to imply that we are somehow in the pocket of Mr Fayed, he then accuses us of, 'strange to say', failing to mention these important facts.

We couldn't mention them, of course, because what Glover says is completely wrong. The 'vital information at the 11th hour' which rescued Granada TV and the Guardian was something else entirely. As is well-known to everyone except, apparently, Glover, the 'vital information' was micro- film of BA's old flight coupons, discovered at the 11th hour by a subpoena and lengthy searches in the airline warehouse. Copies of these microfilms were presented to the judge, and the libel trial was forthwith halt- ed on that very day, because they proved that Mr Aitken had lied in the witness box. He had testified his wife was in Paris. The plane tickets showed she had been in Switzerland.

The telephone record to which Glover confusedly refers, far from being flourished by Fayed at the 11th hour, had been in the Guardian's possession for the previous three years. And far from being 'vital', it had already proved inconclusive in the wit- ness box. Asked whether he had not made a phone call to his wife in Switzerland, as the phone record appeared to show, Aitken lied coolly that he had phoned not his wife there, but his mother-in-law.

The journalists, facing defeat indeed at the 11th hour, then embarked, as we remember very well, on that desperate search for evidence, in Switzerland and London, which finally produced the plane tickets. So why does Glover lead your read- ers up the garden path with wildly inaccu- rate stories? Surely not through stupidity. Could it be malice?

Stephen Glover was about to go on holiday when this letter arrived, but will reply to it in his column next week.— Ed.