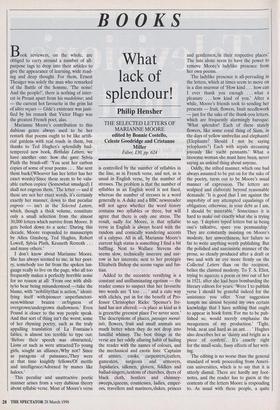 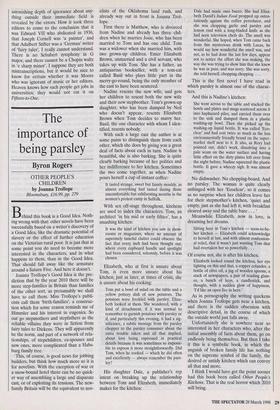 What lack of splendour!

THE SELECTED LEI'lERS OF MARIANNE MOORE edited by Bonnie Costello, Celeste Goodridge and Cristanne Miller Faber, £30, pp. 624 Book reviewers, on the whole, are obliged to carry around a number of all- purpose tags to drop into their articles to give the appearance of learning, wide read- ing and deep thought. For them, Ernest Thesiger was solely the man who remarked of the Battle of the Somme, 'The noise! And the people!', there is nothing of inter- est in Proust apart from his madeleine; and — the current hot favourite in the grim list of idees revues — Gide's existence was justi- fied by his remark that Victor Hugo was the greatest French poet, alas.

Marianne Moore's contribution to this dubious genre always used to be her remark that poems ought to be like artifi- cial gardens with real toads in them, but thanks to Ted Hughes's splendidly bad- tempered new book, Birthday Letters, we have another one: how she gave Sylvia Plath the brush-off: 'You sent her carbon copies of some of your poems . . . She sent them back/(Whoever has her letter has her exact words)/Since these seem to be valu- able carbon copies/ (Somewhat smudged) I shall not engross them.' The letter — and if these are not her exact words, it's certainly exactly her manner, down to that peculiar engross — isn't in the Selected Letters, which, though a thick volume, constitute only a small selection from the almost 30,000 letters which survive from Moore. It gets boiled down to a note: 'During this decade, Moore responded to manuscripts by Allen Ginsberg, Ted Hughes, Robert Lowell, Sylvia Plath, Kenneth Rexroth . . . and many others.'

I don't know about Marianne Moore. She has always seemed to me, in her poet- ry, somebody too far from the spoken lan- guage really to live on the page, who all too frequently makes a perfectly horrible noise for no reason at all: 'From one with abili- ty/to bear being misunderstood —/take the blame, with "nobility/that is action," identi- fying itself with/pioneer unperfunctori- ness/without brazen or/bigness of overgrown/undergrown shallowness.' Even Pound is closer to the way people speak. And that sort of thing isn't the worst; some of her rhyming poetry, such as the truly appalling translation of La Fontaine's fables, is almost too terrible to type out: `Before their speech was obstructed,/ Lions or such as were attracted/To young girls, sought an alliance./Why not? Since as paragons of puissance,/They were at that time knightly fellows/Of mettle and intelligence/Adorned by manes like haloes.'

This peculiar and unattractive poetic manner arises from a very dubious theory about syllabic verse. Most of Moore's verse is controlled by the number of syllables in the line, as in French verse, and not, as is usual in English verse, by the number of stresses. The problem is that the number of syllables in an English word is not fixed, whereas the number of stresses in a word generally is. A duke and a BBC newsreader will not agree whether the word history contains two syllables or three, but will agree that there is only one stress. The result, sadly for Moore, is that syllabic verse in English is always heard with the random and comically wandering accents of a calypso. All in all, Marianne Moore's current high status is something I find a bit baffling. Next to Wallace Stevens she seems slow, technically insecure and nar- row in her interests; next to her protegee Elizabeth Bishop she seems vague and fus- tian.

Added to the eccentric versifying is a constant and unilluminating egotism — the reader comes to suspect that her favourite two words are 'I too . ' and a cute way with clichés, put in for the benefit of Pro- fessor Christopher Ricks: 'Spenser's Ire- land has not altered; —/a place as kind as it is green/the greenest place I've never seen.' The descriptions of places, paysages moral- ises, flowers, fruit and small animals are much better when they do not drop into fanciful whimsy. The best things in the verse are her oddly alluring habit of hailing the reader with the names of colours, and the mechanical and exotic lists: 'Captains of armies, cooks, carpenters,/cutlers, gamesters, surgeons and armorers, /lapidaries, silkmen, glovers, fiddlers and ballad-singers,/sextons of churches, dyers of black cloth, hostlers and chimney- sweeps,/queens, countesses, ladies, emper- ors, travellers and mariners,/dukes, princes and gentlemen,/in their respective places.' The lists alone seem to have the power to remove Moore's ladylike presence from her own poems.

The ladylike presence is all-pervading in the letters, which at times seem to move on in a dim murmur of 'How kind . . how can I ever thank you enough . . . what a pleasure . . . how kind of you.' After a while, Moore's friends took to sending her presents — fruit, flowers, Inuit needlework — just for the sake of the thank-you letters, which are frequently alarmingly baroque: `What splendor! Each of these stately flowers, like some royal thing of Siam, in the days of yellow umbrellas and elephants! (Elephants? Should I not be saying yelophants?) Each with sepals streaming joyously like yacht pennants.' What a tiresome woman she must have been, never saying an unkind thing about anyone.

Oddly, the stilted manner, which one had always assumed to be put on for the sake of the poetry, turns out to be Moore's usual manner of expression. The letters are sculpted and elaborate beyond reasonable demands: 'It is good that I am against the unprobity of any attempted equalisings of obligation; otherwise, in your debt as I am, I should be miserable.' Sometimes it is hard to make out exactly what she is trying to say. 'I deplore typed letters but in being one's talkative, spare you penmanship.' They are constantly insisting on Moore's modesty, her unworthiness, her failure so far to write anything worth publishing. But the polished and narcissistic manner of the prose, so clearly produced after a draft or two and with an eye more firmly on the Collected Letters than on the recipient, belies the claimed modesty. To T. S. Eliot, trying to squeeze a poem or two out of her in 1921, after she had been bombarding the literary editors for years: 'Were 1 to publish verse I should be grateful indeed for the assistance you offer. Your suggestion tempts me almost beyond my own certain knowledge that I have nothing that ought to appear in book form. For me to be pub- lished so, would merely emphasise the meagerness of my production."Tight, brisk, neat and hard as an ant. . . ' Hughes also describes her as 'dainty and bright as a piece of confetti'. It's exactly right for the small-scale, fussy effects of her writ- ing.

The editing is no worse than the general standard of work proceeding from Ameri- can universities, which is to say that it is utterly dismal. There are hardly any foot- notes, and the reader has to guess at the contents of the letters Moore is responding to. As usual with these people, a quite astonishing depth of ignorance about any- thing outside their immediate field is revealed by the errors. How it took three editors to come to the conclusion that it was Edward VII who abdicated in 1936, that Joseph Cornell was 'a painter', and that Adalbert Stiffer was a 'German' writer of 'fairy tales', I really cannot understand. There is no Schubert symphony in G major, and there cannot be a Chopin waltz in 'e sharp minor'. I suppose they are both mistranscriptions, but it would be nice to know for certain whether it was Moore who was ignorant of music or her editors. Heaven knows how such people get jobs in universities; they would not cut it on Fifteen-to-One.