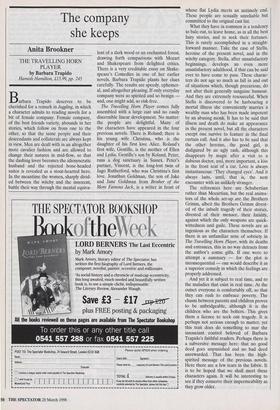 The company she keeps

THE TRAVELLING HORN PLAYER by Barbara Trapido Hamish Hamilton, £15.99, pp. 245 Barbara Trapido deserves to be cherished for a remark in Juggling, in which a character admits to reading novels for a bit of female company. Female company, of the best friends variety, abounds in her stories, which follow on from one to the other, so that the same people and their descendants and collaterals are always kept in view. Men are dealt with in an altogether more cavalier fashion and are allowed to change their natures in mid-flow, so that the dashing lover becomes the idiosyncratic husband and the rejected bone-headed suitor is revealed as a stout-hearted hero. In the meantime the women, sharply divid- ed between the witchy and the innocent, battle their way through the mental equiva- lent of a dark wood or an enchanted forest, drawing forth comparisons with Mozart and Shakespeare from delighted critics. There is a very creditable essay on Shake- speare's Comedies in one of her earlier novels. Barbara Trapido plants her clues carefully. The results are speedy, ephemer- al, and altogether pleasing. If only everyday company were so spirited and so benign and, one might add, so risk-free.

The Travelling Horn Player comes fully assembled with a large cast and no easily discernible linear development. No matter: the people are delightful. Many of the characters have appeared in the four previous novels. There is Roland; there is his young wife Christina, who is the daughter of his first love Alice. Roland's first wife, Gentile, is the mother of Ellen and Lydia. Gentile's son by Roland, Peter, runs a dog sanctuary in Sussex. Peter's partner, Vincent, is the long-lost twin of Jago Rutherford, who was Christina's first love. Jonathan Goldman, the son of Jake and Jane Goldman from Brother of the More Famous Jack, is a writer in front of whose flat Lydia meets an untimely end. These people are sexually unreliable but committed to the original cast list.

What they have in common is a tendency to bale out, to leave home, as in all the best fairy stories, and to seek their fortunes. This is rarely accomplished in a straight- forward manner. Take the case of Stella, heroine of the present novel, and in the witchy category. Stella, after unsatisfactory beginnings, develops an even more unsatisfactory adulthood, if that can be said ever to have come to pass. These charac- ters do not age so much as fall in and out of situations which, though precarious, do not alter their generally sanguine humour. And they are extremely resourceful. When Stella is discovered to be harbouring a mortal illness she conveniently marries a wealthy man who has been made impotent by an abusing monk. It has to be said that illness and death do make an appearance in the present novel, but all the characters except one survive to feature in the final curtain call. And it also has to be said that the other heroine, the good girl, is disfigured by an ugly rash, although this disappears by magic after a visit to a dubious doctor, and, more important, a kiss in the front seat of a car. Love is always instantaneous: 'They changed eyes'. And it always lasts, until, that is, the next encounter with an unlikely stranger.

The references here are Schubertian rather than Mozartian, but the real anima- tors of the whole set-up are the Brothers Grimm, albeit the Brothers Grimm divest- ed of the inbuilt tragedy of their stories, divested of their menace, their fatality, against which the only weapons are quick- wittedness and guile. These novels are as ingenious as the characters themselves. If there is an unfamiliar note of sobriety in The Travelling Horn Player, with its deaths and entrances, this in no way detracts from the author's comic gifts. If one were to attempt a summary — for the plot is inconsequential — one would describe it as a superior comedy in which the feelings are properly addressed.

And yet it is subject to real time, and to the maladies that exist in real time. At the outset everyone is comfortably off, so that they can rush to embrace poverty. The chasm between parents and children proves to be unbridgeable, although it is the children who are the bolters. This gives them a licence to seek out tragedy. It is perhaps not serious enough to matter, yet this trait does do something to mar the insouciant control beloved of Barbara Trapido's faithful readers. Perhaps there is a subversive message here: that no good deed goes unpunished and no bad deed unrewarded. That has been the high- spirited message of the previous novels. Here there are a few tears in the fabric. It is to be hoped that we shall meet these characters again. It will be interesting to see if they conserve their impermeability as they grow older.