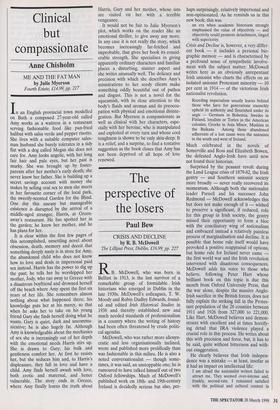 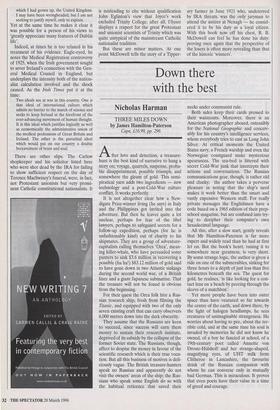 The perspective of the losers

CRISIS AND DECLINE by R. B. McDowell The Lilliput Press, Dublin, £16.99, pp. 227 RB. McDowell, who was born in Belfast in 1913, is the last survivor of a remarkable group of formidable Irish historians who emerged in Dublin in the late 1930s. McDowell's colleagues, T. W. Moody and Robin Dudley Edwards, found- ed and edited Irish Historical Studies in 1938 and thereby established new and much needed standards of professionalism in a country where the writing of history had been often threatened by crude politi- cal agendas.

McDowell, who was rather more idiosyn- cratic and less organisationally inclined, wrote and published more prolifically than was fashionable in this milieu. He is also a noted conversationalist — though some- times, it was said, an unstoppable one; he is rumoured to have talked himself out of two Oxford fellowships. Much of McDowell's published work on 18th- and 19th-century Ireland is decidedly serious but also, per- haps surprisingly, relatively impersonal and non-opinionated. As he reminds us in this new book, this was

an era when academic historians strongly emphasised the value of objectivity — and objectivity could promote detachment, tinged with superiority.

Crisis and Decline is, however, a very differ- ent book — it includes a personal bio- graphic memoir — and is characterised by a profound sense of sympathetic involve- ment with the subject matter: McDowell writes here as an obviously unrepentant Irish unionist who charts the effects on an isolated unionist Protestant minority — 10 per cent in 1914 — of the victorious Irish nationalist revolution.

Receding imperialism usually leaves behind those who have for generations staunchly upheld its authority and flourished under its aegis — Germans in Bohemia, Swedes in Finland, loyalists or Tories in the American colonies, Greeks in Asia Minor, Muslims in the Balkans. Among those abandoned adherents of a lost cause were the unionists in the south and west of Ireland.

Much celebrated in the novels of Somerville and Ross and Elizabeth Bowen, the defeated Anglo-Irish have until now not found their historian.

Surprised by the peasant revolt during the Land League crisis of 1879-82, the Irish gentry — and Southern unionist society more broadly — never really recovered its momentum. Although both the nationalist leader Parnell and his successor John Redmond — McDowell acknowledges this but does not make enough of it — wished to preserve a significant, if reduced, role for this group in Irish society, the gentry missed their opportunity to form a bloc with the conciliatory wing of nationalism and embraced instead a relatively painless process of marginalisation and decline. It is possible that home rule itself would have provoked a positive reappraisal of options, but home rule for Ireland never came the first world war and the Irish revolution intervened with disastrous consequences. McDowell adds his voice to those who believe, following Peter Hart whose brilliant book on this topic is due this month from Oxford University Press, that the war alone, despite the massive Anglo- Irish sacrifice in the British forces, does not fully explain the striking fall in the Protes- tant population of the 26 counties between 1911 and 1926 from 327,000 to 221,000. Like Hart, McDowell believes and demon- strates with excellent and at times horrify- ing detail that IRA violence played a crucial role in this process. He writes about this with precision and force, but, it has to be said, quite without bitterness and with- out exaggeration.

He clearly believes that Irish indepen- dence was a mistake — at least, insofar as it had an impact on intellectual life:

I am afraid the nationalist writers failed to attract me. They seemed over-intense and, frankly, second-rate. I remained satisfied with the political and cultural context in which I had grown up, the United Kingdom. I may have been wrongheaded, but I am not seeking to justify myself, only to explain.

Yet at the same time he makes it clear it was possible for a person of his views to `greatly appreciate many features of Dublin life'.

Indeed, at times he is too relaxed in his treatment of his evidence. Eagle-eyed, he notes the Medical Registration controversy of 1925, when the Irish government sought to sever Ireland's connection with the Gen- eral Medical Council in England, but underplays the intensity both of the nation- alist calculation involved and the shock caused. As the Irish Times put it at the time: Two ideals are at war in this country. One is that ideal of international culture which admits no barrier to the march of science and seeks to keep Ireland at the forefront of the ever-advancing movement of human thought. It is this ideal which justifies logically as well as economically the administrative union of the medical professions of Great Britain and Ireland. The other is the parochial ideal which would put on our country a double bereavement of brain and soul.

There are other slips. The Carlow shopkeeper and his solicitor listed here who were shot dead by the IRA for failing to show sufficient respect on the day of Terence MacSwiney's funeral, were, in fact, not Protestant unionists but very promi- nent Catholic constitutional nationalists. It is misleading to cite without qualification John Eglinton's view that Joyce's work excluded Trinity College; after all, Ulysses displays a respect for the great Protestant and unionist scientists of Trinity which was quite untypical of the mainstream Catholic nationalist tradition.

But these are minor matters. At one point McDowell tells the story of a Tipper- ary farmer in June 1921 who, undeterred by IRA threats, was the only juryman to attend the assizes at Nenagh — he consid- ered it to be his duty as a loyal citizen. With this book now off his chest, R. B. McDowell can feel he has done his duty: proving once again that the perspective of the losers is often more revealing than that of the historic 'winners'.