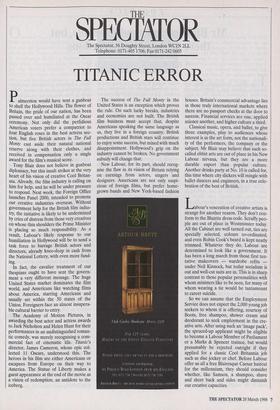 Palmerston would have sent a gunboat to shell the Hollywood Hills. The flower of Britain, the pride of our nation, has been passed over and humiliated at the Oscar ceremony. Not only did the perfidious American voters prefer a compatriot to four English roses in the best actress sec- tion, but five British actors in The Full Monty cast aside their natural national reserve along with their clothes, and received in compensation only a single award for the film's musical score.

Tony Blair does not believe in gunboat diplomacy, but this insult strikes at the very heart of his vision of creative Cool Britan- nia. Already, the film industry is calling on him for help, and he will be under pressure to respond. Next week, the Foreign Office launches Panel 2000, intended to promote our creative industries overseas. Without government help for the British film indus- try, the initiative is likely to be undermined by cries of distress from those very creatives on whose thin shoulders the Prime Minister is placing so much responsibility. As a result, Labour's likely response to our humiliation in Hollywood will be to send a task force to barrage British actors and directors, already knee-deep in cash from the National Lottery, with even more fund- ing. In fact, the cavalier treatment of our thespians ought to have sent the govern- ment a very different message. The huge United States market dominates the film world, and Americans like watching films about America, starring Americans and usually set within the 50 states of the Union. Foreigners face an almost insupera- ble cultural barrier to entry.

The Academy of Motion Pictures, in awarding the best actor and actress awards to Jack Nicholson and Helen Hunt for their performances in an undistinguished roman- tic comedy, was merely recognising a com- mercial fact of cinematic life. Titanic's director, James Cameron, whose epic col- lected 11 Oscars, understood this. The heroes in his film are either Americans or escapees from Europe on their way to America. The Statue of Liberty makes a guest appearance at the end of the movie as a vision of redemption, an antidote to the iceberg. The success of The Full Monty in the United States is an exception which proves the rule. On such lucky breaks, industries and economies are not built. The British film business must accept that, despite Americans speaking the same language as us, they live in a foreign country. British productions and British stars will continue to enjoy some success, but mixed with much disappointment. Hollywood's grip on the industry cannot be broken. No government subsidy will change that.

New Labour, for its part, should recog- nise the flaw in its vision of Britain relying on earnings from actors, singers and designers. Americans are not only suspi- cious of foreign films, but prefer home- grown bands and New York-based fashion houses. Britain's commercial advantage lies in those truly international markets where there are no passport checks at the door to success. Financial services are one, applied science another, and higher culture a third.

Classical music, opera, and ballet, to give three examples, play to audiences whose interest is in the art form, not the nationali- ty of the performers, the company or the subject. Mr Blair may believe that such so- called elitist arts are out of place in his New Labour nirvana, but they are a more durable export than popular culture. Another drinks party at No. 10 is called for, this time where city slickers will mingle with ballet dancers and engineers, in a true cele- bration of the best of British.

Labour's veneration of creative artists is strange for another reason. They don't con- form to the Blairite dress code. Scruffy peo- ple are out of place in Westminster today. All the Cabinet are well turned out, ties are specially selected, colours co-ordinated, and even Robin Cook's beard is kept neatly trimmed. Whatever they do, Labour are determined to look like a government. It has been a long march from those first ten- tative makeovers — wardrobe refits under Neil Kinnock, but today socialism is out and well-cut suits are in. This is in sharp contrast to those popular personalities with whom ministers like to be seen, for many of whom wearing a tie would be tantamount to career suicide.

So we can assume that the Employment Service does not expect the 2,000 young job seekers to whom it is offering, courtesy of Boots, free shampoo, shower cream and deodorant to seek employment in the cre- ative arts. After using such an 'image pack', the spruced-up applicant might be eligible to become a Labour Member of Parliament or a Marks & Spencer trainee, but would presumably be rejected outright if they applied for a classic Cool Britannia job such as disc jockey or chef. Before Labour offer us all a free Blairesque Caesar haircut for the millennium, they should consider whether, like Samson, a shampoo, shave and short back and sides might diminish our creative capacities.