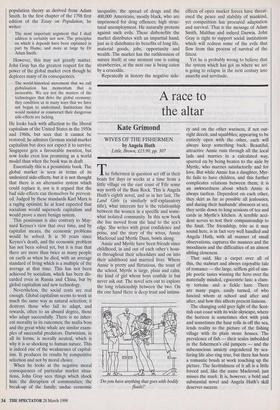 A race to the altar

WIVES OF THE FISHERMEN by Angela Huth Little, Brown, L15.99, pp. 307 The fishermen in question set off in their boats for days or weeks at a time from a little village on the east coast of Fife some way north of the Bass Rock. This is Angela Huth's eighth novel, and as in her last, The Land Girls (a similarly self-explanatory title), what interests her is the relationship between the women in a specific and some- what isolated community. In this new book she has moved from the land to the sea's edge. She writes with great confidence and poise, and the story of the wives, Annie Macleoud and Myrtle Duns, bowls along.

Annie and Myrtle have been friends since childhood, in and out of each other's hous- es throughout their schooldays and on into their adulthood and married lives. Where Annie is pretty and flirtatious, the toast of the school, Myrtle is large, plain and calm, the kind of girl whom boys confide in but never ask out. The novel sets out to explore the long relationship between the two. On the one hand there is deep trust and intima- Do you have anything that goes with bodily fluids?' cy and on the other wariness, if not out- right deceit, and squabbles; appearing to be entirely open with the other, each will always keep something back. Beautiful, attractive Annie runs through all the local lads and marries in a calculated way, spurred on by being beaten to the aisle by Myrtle, who marries satisfactorily and for love. But while Annie has a daughter, Myr- tle fails to have children, and this further complicates relations between them; it is an awkwardness about which Annie is always tactless. Dependent on each other, they skirt as far as possible all jealousies, and during their husbands' absences at sea, they settle down to long sessions of tea and cards in Myrtle's kitchen. A terrible acci- dent serves to test their companionship to the limit. The friendship, trite as it may sound here, is in fact very well handled and Angela Huth, with all manner of small observations, captures the nuances and the moodiness and the difficulties of an almost sibling closeness.

That said, like a carpet over all of this, the stalwart and always enjoyable tale of romance — the large, selfless girl of sim- ple poetic tastes winning the hero over the materially minded, egocentric lass; a clum- sy tortoise and a fickle hare. There are many pages, easily turned, of who fancied whom at school and after and after, and how this affects present liaisons.

The changing cold grey light of the Scot- tish east coast with its wide skyscape, where the horizon is sometimes shot with pink and sometimes the haar rolls in off the sea, lends reality to the picture of the fishing village with its plain stone houses. The prevalence of fish — their scales imbedded in the fishermen's old jumpers — and the subconscious anxiety engendered by sea- faring life also ring true, but there has been a romantic brush at work touching up the picture. The Scottishness of it all is a little forced and, like the name Macleoud, just misses the mark. It is, however, a bold and substantial novel and Angela Huth's skill deserves success.