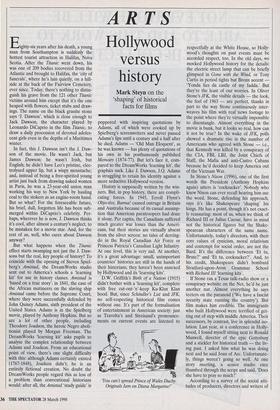 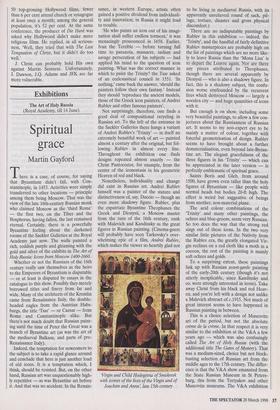 Mark Steyn on the `shaping' of historical facts for films Eighty-six years after his death, a young man from Southampton is suddenly the hottest tourist attraction in Halifax, Nova Scotia. After the Tuanic went down, his was one of 209 bodies recovered from the Atlantic and brought to Halifax, the 'city of funerals', where he's lain quietly, on a hill- side at the back of the Fairview Cemetery, ever since. Today, there's nothing to distin- guish his grave from the 121 other Titanic victims around him except that it's the one heaped with flowers, ticket stubs and draw- ings. The name on the black granite stone says 'J. Dawson', which is close enough to Jack Dawson, the character played by Leonardo DiCaprio in the film Titanic, to draw a daily procession of devoted adoles- cent girls even in the depths of a Maritimes winter.

In fact, this J. Dawson isn't the J. Daw- son of the movie. He wasn't Jack, but James Dawson: he wasn't Irish, but English; he didn't have Leo's pristine, elec- trolysed upper lip, but a wispy moustache; and, instead of being a free-spirited young artist just back from drawing naked women in Paris, he was a 23-year-old union man working his way to New York by hauling coal to the stokers as an engine-room hand. But so what? For the foreseeable future, his brief, dull, forgotten life has been sub- merged within DiCaprio's celebrity. Per- haps, wherever he is now, J. Dawson thinks it's cool, after almost a century's neglect, to be mistaken for a movie star. And, for the rest of us, well, who cares about Dawson anyway?

But what happens when the Titanic effect starts swamping not just the J. Daw- sons but the real, key people of history? To coincide with the opening of Steven Spiel- berg's Amistad, the DreamWorks studio sent out to America's schools a 'learning kit' for use in history classes. Amistad is `based on a true story': in 1841, the case of the African mutineers on the slaving ship Amistad came before the Supreme Court, where they were successfully defended by John Quincy Adams, sixth president of the United States. Adams is in the Spielberg movie, played by Anthony Hopkins. But so are a lot of other people, including Theodore Joadson, the heroic Negro aboli- tionist played by Morgan Freeman. The DreamWorks 'learning kit' asks pupils to analyse the complex relationship between Adams and Joadson. From an educational point of view, there's one slight difficulty with this: although Adams certainly existed (1767-1848), Joadson didn't; he is an entirely fictional creation. No doubt the DreamWorks people regard this as less of a problem than conventional historians would: after all, the Amistad 'study guide' is peppered with inspiring quotations by Adams, all of which were cooked up by Spielberg's screenwriters and never passed Adams's lips until a century and a half after he died. Adams — 'Old Man Eloquent', as he was known — has plenty of quotations of his own in his posthumously published Memoirs (1874-77). But let's face it, com- pared to the DreamWorks 'learning kit', the graphics suck. Like J. Dawson, J.Q. Adams is struggling to retain his identity against a more seductive Hollywood version.

History is supposedly written by the win- ners. But, in pop history, there are compli- cating forces. In 1945, Erroll Flynn's Objective, Burma! caused outrage in Britain and Australia because of its casual assump- tion that American paratroopers had done it alone. Per capita, the Canadians suffered much greater war losses than the Ameri- cans, but their stories are virtually absent from the silver screen: no tales of derring- do in the Royal Canadian Air Force or Princess Patricia's Canadian Light Infantry. At one level, this is very sad. At another, it's a great advantage: small, unimportant countries' histories are still in the hands of their historians; they haven't been annexed by Hollywood and its 'learning kits'.

D.W. Griffith's Birth of a Nation (1915) didn't bother with a `learning kit', complete with free cut-out-'n'-keep Ku-Klux Klan hood. But, since Schindler's List and JFK, no self-respecting historical film comes without one. It's part of the formalisation of entertainment in American society: just as Travolta's and Streisand's pronounce- ments on current events are listened to `You can't spread Prince of Wales Duchy Originals Jam on Diana Margarine!' respectfully at the White House, so Holly- wood's thoughts on past events must be accorded respect, too. In the old days, we mocked Hollywood history for the details: the electric street lamp that can be briefly glimpsed in Gone with the Wind, or Tony Curtis in period tights but Bronx accent — `Yonda lies da castle of my fadda.' But they're the least of our worries. In Oliver Stone's JFK, the visible details — the look, the feel of 1963 — are perfect, thanks in part to the way Stone continuously inter- weaves his film with real' news footage to the point where they're virtually impossible to disentangle. Almost everything in the movie is bunk, but it looks so real, how can it not be true? In the wake of JFK, polls showed a dramatic rise in the number of Americans who agreed with Stone — i.e., that Kennedy was killed by a conspiracy of the CIA, FBI, LBJ, the Joint Chiefs of Staff, the Mafia and anti-Castro Cubans because he'd decided to keep America out of the Vietnam War.

In Stone's Nixon (1996), one of the first words the President (Anthony Hopkins again) utters is 'cocksucker'. Nobody who knew Nixon can ever recall hearing him use the word. Stone, defending his approach, says it's like Shakespeare 'shaping' his kings. He has a point, though it's not exact- ly reassuring: most of us, when we think of Richard III or Julius Caesar, have in mind not the historical figures but the Shake- spearean characters of the same name. Unfortunately, today's directors, with their core values of cynicism, moral relativism and contempt for social order, are not the Bard. It's the difference between `Et tu, Brute?' and 'Et tu, cocksucker?'. And, to his credit, Shakespeare didn't bombard Stratford-upon-Avon Grammar School with Richard III 'learning kits'.

If Stone ran a Texas talk-radio show or a conspiracy website on the Net, he'd be just another nut. Almost everything he says teeters on the paranoid (We have a fascist security state running the country'). But film makes him credible. The immigrants who built Hollywood were terrified of get- ting out of step with middle America. Their successors, by contrast, live in splendid iso- lation. Last year, at a conference in Holly- wood, I found myself sitting next to Ronald Maxwell, director of the epic Gettysburg and a stickler for historical truth — the liv- ing past. I asked him what he was doing next and he said Joan of Arc. Unfortunate- ly, things weren't going so well. At one story meeting, a senior studio exec thumbed through the script and said, 'Does she have to pray so much?'

According to a survey of the social atti- tudes of producers, directors and writers of 50 top-grossing Hollywood films, fewer than 6 per cent attend church or synagogue at least once a month; among the general population, it's 52 per cent. At the same conference, the producer of Die Hard was asked why Hollywood didn't make more religious films. He replied, in all serious- ness, 'Well, they tried that with The Last Temptation of Christ, but it didn't do too well.'