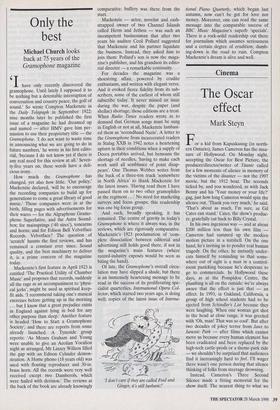 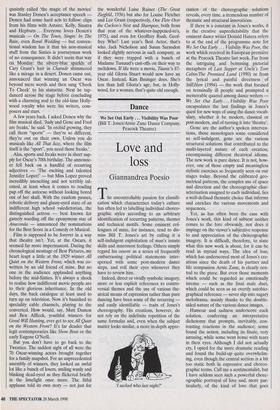 For a kid from Kapuskasing (in north- ern Ontario), James Cameron has the mea- sure of Hollywood. On Monday night, accepting the Oscar for Best Picture, the producer/director/writer of Titanic called for a few moments of silence in memory of the victims of the disaster — not the 1997 movie, but the 1912 boat. The seconds ticked by, and you wondered, as with Jack Benny and his 'Your money or your life?' gag, just how long Cameron would spin the silence out. 'Thank you very much,' he said. `That's about as much, I'm sure, as. Gil Cates can stand.' Cates, the show's produc- er, gratefully cut back to Billy Crystal.

In his own ingenious way — and at about $200 million less than his own film Cameron had summed up the modern motion picture in a nutshell. On the one hand, he's inviting us to ponder real human tragedy. On the other, he instantly under- cuts himself by reminding us that some- where out of sight is a man in a control- room panicking because he's desperate to go to commercials. In Hollywood these days, as at the Pompidou Centre, the plumbing is all on the outside: we're always aware that the effect is just that — an effect. In 1993, in Oakland, California, a group of high school students had to be ejected from Schindler's List because they were laughing. When one woman got shot in the head at close range, it was greeted with 'Oh, man! That was so cool'. But after two decades of jokey terror from Jaws to Jurassic Park — after films which cannot move us because every human element has been eradicated and been replaced by the high-tech cattle-prods or a theme-park ride — we shouldn't be surprised that audiences find it increasingly hard to feel. I'll wager there wasn't one person during that silence thinking of folks from steerage drowning.

Instead, Cameron's Three Second Silence made a fitting memorial for the show itself. The nearest thing to what we quaintly called 'the magic of the movies' was Stanley Donen's acceptance speech Donen had some hard acts to follow: clips from his films with Astaire, Kelly, Sinatra and Hepburn . . . Everyone loves Donen's musicals — On The Town, Singin' In The Rain, even Royal Wedding — but conven- tional wisdom has it that his non-musical stuff from the Sixties is journeyman work of no consequence. It didn't seem that way on Monday: the silvery-blue sparkle of Cary Grant's hair in Charade shimmered like a mirage in a desert. Donen came out, announced that winning an Oscar was beyond mere words and then sang 'Cheek To Cheek' to his statuette. Next he tap- danced across the stage before concluding with a charming nod to the old-time Holly- wood royalty who were his writers, com- posers and stars.

A few years back, I asked Donen why the film musical died. 'Judy and Gene and Fred are freaks,' he said. 'In orchid growing, they call them "sports" — they're so different, they're out on their own. Unless you do musicals like All That Jazz, where the film itself is the "sport", you need those freaks.'

Alas, sports and freaks were in short sup- ply for Oscar's 70th birthday. The announc- er fell back on a handful of recurring adjectives — 'The exciting and talented Jennifer Lopez!' — but Miss Lopez proved incredibly unexciting and not terribly tal- ented, at least when it comes to reading pap off the autocue without looking bored out of her skull. With the random pauses, robotic delivery and glassy-eyed stare of an indifferent high school valedictorian, the distinguished actress — best known for gamely warding off the eponymous star of Anaconda — announced the nominations for the Best Score in a Comedy or Musical.

Film is supposed to be forever in a way that theatre isn't. Yet, at the Oscars, it seemed far more impermanent. During the chronological montage of Best Pictures, my heart leapt a little at the 1929 winner All Quiet on the Western Front, which was co- written by an old friend of mine. But no one in the audience applauded anything before the mid-Sixties. It's always a shock to realise how indifferent movie people are to their glorious inheritance. In the old days, the back catalogue at least used to turn up on television. Now it's banished to speciality cable channels, playing to the converted. How would, say, Matt Damon and Ben Affleck, youthful winners for Good Will Hunting, ever get to see All Quiet on the Western Front? It's far deader that legit contemporaries like Show Boat or the early Eugene O'Neill.

But you don't have to go back to the Twenties. The saddest sight of all were the 70 Oscar-winning actors brought together for a family snapshot. For an unprecedented assembly of winners, they looked an awful lot like a bunch of losers, smiling wanly and blinking dead-eyed as they flickered briefly in the limelight once more. The fitful applause told its own story — not just for the wonderful Luise Rainer (The Great Ziegfeld, 1936) but also for Louise Fletcher and Lee Grant (respectively, One Flew Over the Cuckoo's Nest and Shampoo, both from that year of the whatever-happened-to's, 1975), and even for Geoffrey Rush. Geof- frey Who? Last year's Best Actor, that's who. Jack Nicholson and Susan Sarandon looked slightly nervous in such company, as if they were trapped with a bunch of Madame Tussaud's cast-offs on their way to meltdown. If life were a movie, Tilanic's 87- year old Gloria Stuart would now have an Oscar. Instead, Kim Basinger does. She's less than half Gloria's age, but, in Holly- wood, for a woman, that's quite old enough.