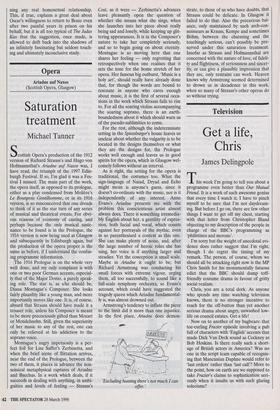 Scottish Opera's production of the 1912 version of Richard Strauss's and Hugo von Hofmannsthal's Ariadne auf Naxos was, I have read, the triumph of the 1997 Edin- burgh Festival. If so, I'm glad it was a Fes- tival I missed. The main part of the work, the opera itself, as opposed to its prologue, either as a play condensed from Moliere's Le Bourgeois Gentilhomme, or in its 1916 version, is so misconceived that one dreads to think of it as the star turn of any series of musical and theatrical events. For obvi- ous reasons of economy of casting, and perhaps because the only musical suste- nance to be found is in the Prologue, the 1916 version is now being used at Glasgow and subsequently in Edinburgh again, but the production of the opera proper is the same as before, if I understand the confus- ing programme information.

The 1916 Prologue is on the whole very well done, and my only complaint is with one or two poor German accents, especial- ly that of the Major Domo, a purely speak- ing role. The star is, as s/he should be, Diana Montague's Composer. She looks fairly plausibly like a young man, and more importantly moves like one. It is, of course, absurd that Strauss should have made it a trouser role, unless his Composer is meant to be more precociously gifted than Mozart or Mendelssohn. Still, given the superiority of her music to any of the rest, one can only be relieved at his addiction to the soprano voice.

Montague's angry impetuosity is a per- fect foil for Lisa Saffer's Zerbinetta, and when the brief scene of flirtation arrives, near the end of the Prologue, between the two of them, it places in advance the non- sensical metaphysical raptures of Ariadne and Bacchus. In a work which deals, if it succeeds in dealing with anything, in ambi- guities and levels of feeling — Strauss's Cosi, as it were — Zerbinetta's advances leave pleasantly open the question of whether she means what she sings, when she launches into her piece about really being sad and lonely, while keeping up glit- tering appearances. It is in the Composer's nature to take her completely seriously, and so to begin going on about eternity. Montague is so moving here that one shares her feeling — only regretting that retrospectively when one realises that it sets the tone for the home stretch of her opera, Her famous big outburst, 'Music is a holy art', should really have already done that, for though the words are bound to resonate in anyone who cares enough about music, it is the first of several occa- sions in the work which Strauss fails to rise to, For all the soaring violins accompanying the soaring soprano, there is an earth- boundedness about it which should warn us of the pseudo-sublimities to come.

For the rest, although the indeterminate setting in the Spiessburger's house leaves us unclear about whether the vulgarity is to be located in the designs themselves or what they are the designs for, the Prologue works well enough and leaves us in good spirits for the opera, which in Glasgow wel- comely follows without an interval.

As is right, the setting for the opera is traditional, the costumes too. What the sign-language of Naiad, Dryad and Echo might mean is anyone's guess, since it doesn't co-ordinate with the music, nor is it independently of any interest. Anne Evans's Ariadne presents me with the problem this conscientious artist almost always does. There is something irremedia- bly English about her, a gentility of expres- sion, both facial and vocal, which counts against her portrayals of the mythic, even in so parenthesised a context as this one. She can make plenty of noise, and, after the large number of heroic roles she has sung, her voice is if anything larger and steadier. Yet the conception is small scale. Maybe in Ariadne it ought to be; but Richard Armstrong was conducting his small forces with extreme vigour, urging them, all too successfully, to sound like a full-scale symphony orchestra, so Evans's account, which could have suggested the tragedy queen which Ariadne fundamental- ly is, was almost drowned out.

Armstrong's tendency to inflate the piece to the limit did it more than one injustice. In the first place, Ariadne does demon- Excluding hunting there's not much I can offer.' strate, to those of us who have doubts, that Strauss could be delicate. In Glasgow it failed to do that. Also the precarious bal- ance, only maintained by such arch-con- noisseurs as Krauss, Kempe and sometimes &thin, between the charming and the touchingly serious, can't possibly be pre- served under this saturation treatment. Insofar as Strauss and Hofmannsthal are concerned with the nature of love, of fideli- ty and flightiness, of seriousness and sincer- ity, or can give a plausible impression that they are, only restraint can work. Heaven knows why Armstrong seemed determined to drown us in decadence in this work, when so many of Strauss's other operas do so without trying.