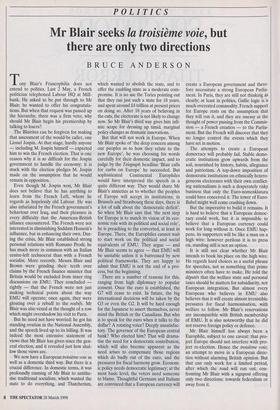 there are only two directions

Tony Blair's Francophilia does not extend to politics. Last 2 May, a French politician telephoned Labour HQ at Mill- bank. He asked to be put through to Mr Blair; he wanted to offer his congratula- tions. But when that request was passed up the hierarchy, there was a firm veto; why should Mr Blair begin his premiership by talking to losers?

The Blairites can be forgiven for making that assessment of the would-be caller, one Lionel Jospin. At that stage, hardly anyone — including M. Jospin himself — expected him to win the French election. That is one reason why it is so difficult for the Jospin government to handle the economy; it is stuck with the election pledges M. Jospin made on the assumption that he would remain in opposition.

Even though M. Jospin won, Mr Blair does not believe that he has anything to learn from the French Left, whom he regards as hopelessly old Labour. He was also infuriated by the French government's behaviour over Iraq, and their pleasure in every difficulty that the American-British alliance encountered. The French were not interested in diminishing Saddam Hussein's influence, but in enhancing their own. Dur- ing the crisis, Mr Blair established strong personal relations with Romano Prodi; he has much more in common with an Italian centre-left technocrat than with a French socialist. More recently, Messrs Blair and Brown were grinding their teeth over claims by the French finance minister that Britain would be excluded from inner ring discussions on EMU. They concluded rightly — that the French were not just making technical points about the way EMU will operate; once again, they were gloating over a rebuff to the rosbifs. Mr Blair was also vexed at the thought of a row which might overshadow his visit to Paris.

But he need not have worried; he got his standing ovation in the National Assembly, and the speech lived up to its billing. It was indeed the most extensive statement of views that Mr Blair has given since the gen- eral election, and it revealed just how shal- low those views are.

We now have a European troisieme voie as well as a domestic third way. But there is a crucial difference. In domestic terms, it was profoundly cunning of Mr Blair to antithe- sise traditional socialism, which wanted the state to do everything, and Thatcherism, which wanted to abolish the state, and to offer the enabling state as a moderate com- promise. It is no use the Tories pointing out that they ran just such a state for 18 years, and spent around £4 trillion at present prices on doing so. After 18 years of believing in the cuts, the electorate is not likely to change now. So Mr Blair's third way gives him infi- nite scope for dressing up timid, marginal policy changes as dramatic innovations.

But that will not work in Europe. When Mr Blair spoke of 'the deep concern among our peoples as to how they relate to the new Europe', he was choosing his words carefully for their domestic impact, and to judge by the Telegraph headline 'Blair calls for curbs on Europe' he succeeded. But sophisticated Continental Europhiles would have interpreted the speech in a quite different way. They would share Mr Blair's anxieties as to whether the peoples of Europe will accept its institutions; in Brussels and Strasbourg these days, there is a lot of talk about the 'democratic deficit'. So when Mr Blair says that 'the next step for Europe is to match its vision of its eco- nomic role with its political and social role', he is preaching to the converted, at least in Europe. There, the Europhiles cannot wait to start work on the political and social equivalents of EMU. They argue — and Mr Blair seems to agree — that EMU will be unstable unless it is buttressed by new political frameworks. They are happy to admit that EMU is not the end of a pro- cess, but the beginning.

There are a number of reasons for this, ranging from high diplomacy to popular consent. Once the euro is established, the G7 will cease to exist. In future, the big international decisions will be taken by the G3 or even the G2. It will be hard enough for the Japanese to assert themselves, never mind the British or the Canadians. But who is to speak for the euro when it talks to the dollar? A rotating voice? Deeply unsatisfac- tory. The governor of the European central bank? Who elected him? That will drama- tise the need for a democratic contribution, which will also become apparent as the need arises to compensate those regions which do badly out of the euro, and the pressures for fiscal harmony grow. Econom- ic policy needs democratic legitimacy; at the most basic level, the voters need someone to blame. Thoughtful Germans and Italians are convinced that a European currency will create a European government and there- fore necessitate a strong European Parlia- ment. In Paris, they are still not thinking as clearly; at least in politics, Gallic logic is a much overrated commodity. French support for Europe rests on the assumption that they will run it, and they are uneasy at the thought of power passing from the Commis- sion — a French creation — to the Parlia- ment. But the French will discover that they no longer control the events which they have set in motion.

The attempts to create a European democracy will probably fail. Stable demo- cratic institutions grow upwards from the soil, nourished by history, habits, allegiance and patriotism. A top-down imposition of democratic institutions on ethnically hetero- geneous electorates with their own conflict- ing nationalisms is such a desperately risky business that only the Euro-nomenklatura could have conceived it. The tower of Euro- Babel might well come crashing down.

It is still not clear whether Mr Blair intends to book his place on the high wire. He regards hard choices as a useful phrase for speeches, not as something that prime ministers often have to make. He told the deputes that the welfare state and personal taxes should be matters for subsidiarity, not European integration. But almost every European who believes in EMU also believes that it will create almost irresistible pressures for fiscal harmonisation, with welfare to follow. Mr Blair's reservations are incompatible with British membership of EMU. It is also noteworthy that he did not reserve foreign policy or defence.

Mr Blair himself has always been a Europhile, subject to one caveat: that pro- ject Europe should not interfere with pro- ject re-election. Hence the troisieme vole; an attempt to move in a European direc- tion without alarming British opinion. But that can only work for a limited period, after which the road will run out, con- fronting Mr Blair with a signpost offering only two directions: towards federalism or away from it.