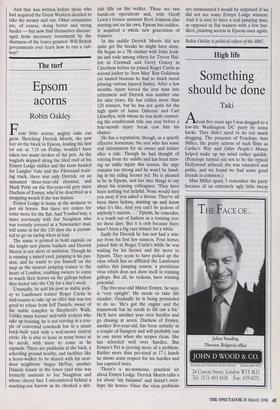 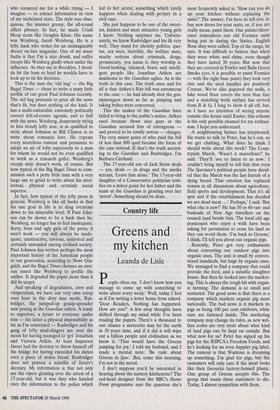 Something should be done

About five years ago I was dragged to a low-life Washington DC party by some hacks. They didn't need to do too much dragging. The presence of Penelope Ann Miller, the pretty actress of such films as Carlito's Way and Other People's Money helped make up my mind rather quickly. (Penelope turned out not to be the typical Hollywood airhead; she was educated and polite, and we found we had some good friends in common.) Miss Miller apart, I remember the party because of an extremely ugly little twerp who cornered me for a while trying — I imagine — to extract information in view of my inebriated state. The style was obse- quious, the manner greasy, the all-round effect phoney. In fact, he made Uriah Heep seem like Genghis Khan. His name was Weisberg, Jacob Weisberg. He is a lefty hack who writes for an unimaginably dreary on-line magazine. One of my many faults is that I'm a nice drunk, and suffer creeps like Weisberg gladly when under the influence. As they say in Brooklyn, I shoul- da hit the bum so hard he woulda have to look up to tie his shoelace.

This is the man the 'old hag' — the Big Bagel Times — chose to write a nasty little profile of our great Paul Johnson recently. The old hag pretends to print all the news that's fit, but does nothing of the kind. It has a multi-culturalist, extremely politically correct left-of-centre agenda, and to hell with the news. Weisberg, desperately trying to kiss trendy lefty arse, is as qualified to write about Johnson as Bill Clinton is to write about romantic love. He repeats every scurrilous rumour and presumes to adopt an air of lofty superiority to a man for whom he would not be even qualified to work as a research gofer. Weisberg's creepy style doesn't work, of course. But how typical of the Big Bagel Times to com- mission such a petty little man with a very large axe to grind to write about his intel- lectual, physical and certainly social superior.

In fact, how typical of the lefty press in general. Weisberg is like all hacks in that his one goal in life is to drag everyone down to his miserable level. If Paul John- son can be shown to be a hack then he, Weisberg, no longer has to feel inadequate. Sorry, boys and ugly girls of the press, it won't work — you will always be inade- quate, unattractive, envious, uninvited and certainly unwanted among civilised society. Paul Johnson has written perhaps the most important history of the American people in our generation, according to Newt Gin- grich, and the Bagel Times chooses an envi- ous insect like Weisberg to profile the author. It degraded the paper more than it did its target.

And speaking of degradation, envy and vituperation, we have our very own creep over here in the dirty mac mode, Rus- bridger, the jumped-up gossip-spreader now posing as the Guardian editor. A toady to superiors, a tyrant to everyone under him — the latter a physical impossibility as far as I'm concerned — Rusbridger and his gang of lefty mud-slingers are over the moon for having managed to `get' Jonathan and Victoria Aitkin. At least Inspector Javert had the decency to throw himself off the bridge for having exceeded his duties over a piece of stolen bread. Rusbridger does not possess a scintilla of Javert's decency. My information is that not only are the vipers gloating over the arrest of a 17-year-old, but it was they who handed over the information to the police which led to her arrest, something which rarely happens when dealing with perjury in a civil case.

She just happens to be one of the sweet- est, kindest and most attractive young girls I know. Nothing surprises me. Unfortu- nately, we know Rusbridger and his ilk very well. They stand for identity politics, quo- tas, sex wars, incivility, the welfare state, mushy notions about criminals, drugs, promiscuity, you name it, they worship it. Good-looking, talented, brave and intelli- gent people like Jonathan Aitken are anathema to the Guardian uglies. As is the truth in this case. The truth once and for all is that Aitken's Ritz bill was extraneous to the case — he had already shot the gos- sipmongers down as far as pimping and taking bribes were concerned.

This the snakes of the Guardian have failed to bring to the public's notice. Aitken sued because those nice guys at the Guardian accused him of outrageous and proved to be totally untrue — charges. The very minor point of who paid the bill of less than 800 quid became the focus of the case instead. If that's the truth accord- ing to the Guardian and Rusbridger, I'm Barbara Cartland.

The 17-year-old son of Jack Straw deals — yes, deals — in drugs and the media scream, 'Leave him alone.' The 17-year-old daughter of a Conservative politician testi- fies on a minor point for her father and the scum at the Guardian is gloating over her `arrest'. Something should be done.