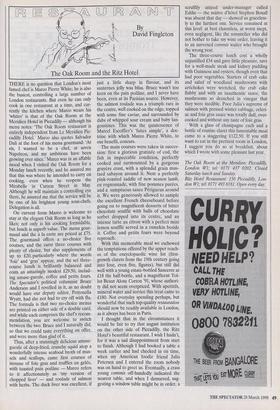 THERE is no question that London's most famed chef is Marco Pierre White; he is also the busiest, controlling a large number of London restaurants. But even he can only cook in one restaurant at a time, and cur- rently the kitchen where Marco wears his `whites' is that of the Oak Room at the Meridien Hotel in Piccadilly — although his menu notes: The Oak Room restaurant is entirely independent from Le Meridien Pic- cadilly Hotel.' Marco also quotes Salvador Dali at the foot of his menu gourmand: 'At six, I wanted to be a chef, at seven Napoleon, and my ambitions have been growing ever since.' Marco was in an affable mood when I visited the Oak Room for a Monday lunch recently, and he assured me that this was where he intended to carry on cooking, even when he reopens the Mirabelle in Curzon Street in May. Although he will maintain a controlling eye there, he assured me that the service will be by one of his brightest young sous-chefs. Delegation is all.

On current form Marco is welcome to stay at the elegant Oak Room as long as he likes; not only is his cooking formidable, but lunch is superb value. The menu gour- mand and the a la carte are priced at £75. The gourmand offers a no-choice five courses, and the carte three courses with plenty of choice, but also supplements of up to £20, particularly where the words `foie' and `gras' appear, and the set three- course lunch is brilliantly balanced and costs an amazingly modest £29.50, includ- ing amuse-gueule, coffee and petits fours. The Spectator's political columnist Bruce Anderson and I revelled in it, as no doubt would have our deputy editor, Petronella Wyatt, had she not had to cry off with flu. The formula is that two no-choice menus are printed on either side of a double card, and while each comprises the chef's recom- mendation, you are welcome to switch between the two. Bruce and I naturally did, so that we could taste everything on offer, and were more than glad of it.

Thus, after a stunningly delicious amuse- gueule of deep-fried, crunchy squid atop a wonderfully intense seafood broth of mus- sels and scallops, came first courses of mousse of foie gras and truffles en gelee, with toasted pain poilane — Marco refers to it affectionately as 'my version of chopped liver' — and roulade of salmon with herbs. The duck liver was excellent, if just a little sharp in flavour, and its sauternes jelly was bliss. Bruce wasn't too keen on the pain poilane, and I never have been, even at its Parisian source. However, the salmon roulade was a triumph: rare in the centre, well cooked on the edge, topped with some fine caviar, and surrounded by dabs of whipped sour cream and baby lan- goustines. This was the quintessence of Marcel Escoffier's lanes simple', a doc- trine with which Marco Pierre White, to our benefit, concurs.

The main courses were taken in succes- sion: first a glorious gratin& of cod, the fish in impeccable condition, perfectly cooked and surmounted by a gorgeous gruyere crust, with a splendid grain mus- tard sabayon around it. Next a perfectly pink-roasted saddle of new season lamb, en rognonnade, with fine pommes purées, and a sumptuous sauce Perigueux around it. We were generously allowed to sample the excellent French dheeseboard before going on to magnificent desserts of bitter chocolate soufflé with balls of chocolate sorbet dropped into its centre, and an intense tarte au citron with a perfect mini lemon soufflé served in a ramekin beside it. Coffee and petits fours were beyond reproach.

With this memorable meal we eschewed the temptations offered by the upper reach- es of the encyclopaedic wine list (first- growth clarets from the 19th century going into four, even five, figures), but still did well with a young estate-bottled Sancerre at £18 the half-bottle, and a magnificent Tol- lot Beaut Aloxe Corton '91, whose authori- ty did not seem overpriced. With aperitifs, mineral water and service this treat came to £180. Not everyday spending perhaps, but wonderful that such top-quality restauration should now be readily available in London, as it always has been in Paris.

I thought that in the circumstances it would be fair to try that august institution on the other side of Piccadilly, the Ritz Hotel's beautiful restaurant. I wish I hadn't, for it was a sad disappointment from start to finish. Although I had booked a table a week earlier and had checked in on time, when my American foodie friend Julia Petersen and I entered the room nobody was on hand to greet us. Eventually, a crass young commis off-handedly indicated the nearest table, and when I demurred, sug- gesting a window table might be in order, a scruffily attired under-manager called Eddie — the maitre d'hôtel Stephen Boxall was absent that day — showed us graceless- ly to the furthest one. Service remained at this level: at best charmless, at worst inept, even negligent, like the sommelier who did not bother to take my wine order, leaving it to an unversed commis waiter who brought the wrong year.

The three-course lunch cost a wholly unjustified £34 and gave little pleasure, save for a well-made steak and kidney pudding with Guinness and oysters, though even that had poor vegetables. Starters of crab cake and salad of woodland mushrooms with artichokes were wretched, the crab cake flabby and with an inauthentic sauce, the mushrooms so drenched in vinegar that they were inedible. Poor Julia's supreme of salmon with pressed winter cabbage, celeri- ac and foie gras sauce was totally dull, over- cooked and without any taste of foie gras. With a glass of champagne each and a bottle of routine claret this lamentable meal came to a staggering £122.50. If you still want to eat in the prettiest room in London, I suggest you do so at breakfast, about which I wrote with some pleasure last year.