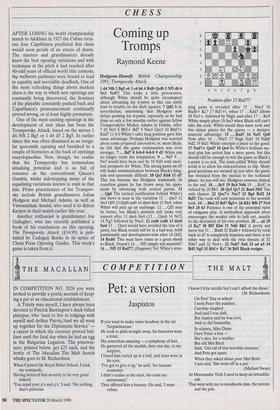 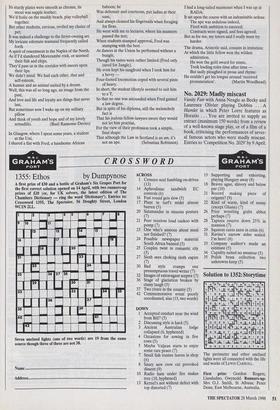 IN COMPETITION NO. 2026 you were invited to provide a poetic account of keep- ing a pet at an educational establishment.

A Trinity man myself, I have always been devoted to Patrick Barrington's duck-billed platypus, who 'used to live in lodgings with myself and Arthur Purvis,/And we all went up together for the Diplomatic Service' a career in which the creature proved bril- liant until the fatal day when he laid an egg in the Bulgarian Legation. The prizewin- ners, printed below, get £25 each, and the bottle of The Macallan The Malt Scotch whisky goes to M. Richardson.

When I joined the Royal Ballet School, I took my centipede, Having lectured him severely to be very good indeed.

'You mind your p's and q's,' I said. `Do nothing that's plebeian If you want to make some headway in the art Terpsichorean.'

He took to plies straight away, his bourrees were a treat, His entrechats amazing — a symphony of feet. He garnered all the medals, then one day, to my surprise, I found him curled up in a ball, and tears were in his eyes.

`I've got to give it up,' he said, 'for reasons economic.

I didn't realise at the start, the costs are astronomic!'

They offered him a bursary. He said, must refuse. I know I'd be terrific but I can't afford the shoes.'

(M. Richardson) On Pets' Day at school I took Peter the panther.

Caroline laughed And said I was daft, But Jessica said he was cool, And so did Samantha.

In science, Miss Dunn Gave Peter a bun — She's nice, for a teacher.

But old Mrs Brett Said, 'Get rid of that horrible creature,' And Pete got upset.

When they asked about poor Mrs Brett I just said, 'She went off in a pet.'

(Michael Swan) At Morecambe Tech I used to keep an armadillo cub That went with me to woodwork class, the movies and the pub. Its sturdy plates were smooth as chrome, its snout was supple leather; We'd frolic on the muddy beach, play volleyball together. But other students, envious, reviled my choice of pet; It was indeed a challenge to the ferret-owning set. My loricate edentate mammal frequently called forth A spirit of resentment in the Naples of the North, As if I'd slandered Morecambe rock, or scorned their fish and chips. They'd pass us in the corridor with sneers upon their lips. We didn't mind. We had each other, that and self-esteem, A human and an animal united by a dream. Well, this was all so long ago, an image from the past, And love and life and loyalty are things that never last, But sometimes now I wake up on my solitary pillow And think of youth and hope and of my lovely armadillo. (Basil Ransome-Davies) In Glasgow, where I spent some years, a student at the Uni, I shared a flat with Fred, a handsome African baboon; he Was debonair and courteous, put ladies at their ease, And always cleaned his fingernails when foraging for fleas.

He went with me to lectures, where his manners passed the test; When students stamped approval, Fred was stamping with the best.

At dances in the Union he performed without a bungle, Though his tastes were rather limited (Fred only cared for Jungle).

He even kept his sangfroid when I took him for a bevvy - Four-footed locomotion coped with several pints of heavy.

In short, the student lifestyle seemed to suit him to a T, So that no one was astounded when Fred gained a law degree.

But in spite of his diploma, still the melancholy fact is That his jealous fellow-lawyers swore they would not let him practise, For the view of their profession took a simple, final shape: That although the Law in Scotland is an ass, it's not an ape. (Sebastian Robinson) I had a long-tailed marmoset when I was up at RADA: It set upon the course with an indomitable ardour. The ape was sedulous indeed, Fired with ambition to succeed; Contracts were signed, and fees agreed; But as for me, my tutors said I really must try harder.

The drama, Aristotle said, consists in imitation: At which the little fellow won the wildest admiration.

He won the gold award for mime, Took leading roles time after time But sadly ploughed in prose and rhyme: He couldn't get his tongue around 'received