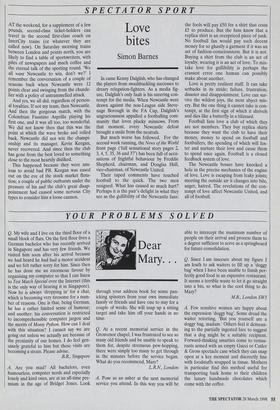 AT the weekend, for a supplement of a few pounds, second-class ticket-holders can travel in the second first-class coach on InterCity trains (or whatever they are called now). On Saturday morning trains between London and points north, you are likely to find a table of sportswriters, with piles of newspapers and much coffee and the eternal talk of the sporting round. 'We all want Newcastle to win, don't we?' I remember the conversation of a couple of seasons back when Newcastle were 12 points clear and swinging from the chande- lier with a policy of untrammelled attack.

And yes, we all did, regardless of person- al loyalties. If not my team, then Newcastle. And then the gorgeous match, with the Colombian Faustino Asprilla playing his first one, and it was all too, too wonderful. We did not know then that this was the point at which the wave broke and rolled back. Newcastle did not win the champi- onship and its manager, Kevin Keegan, never recovered. And since then the club has gone from the best loved to something close to the most heartily disliked.

This happened because they were anx- ious to avoid bad PR. Keegan was eased out on the eve of the stock market flota- tion; a couple of public outbursts under the pressure of his and the club's great disap- pointment had caused some nervous City types to consider him a loose cannon. In came Kenny Dalglish, who has changed the players from swashbuckling successes to dreary relegation-fighters. As a media fig- ure, Dalglish's only fault is his sneering con- tempt for the media. When Newcastle were drawn against the non-League side Steve- nage Borough in the FA Cup, Dalglish's ungraciousness appalled a footballing com- munity that loves plucky minnows. From that moment, every Newcastle defeat brought a smile from the neutrals.

But much worse has followed. For the second week running, the News of the World front page (lull sensational story pages 2, 3, 4, 5, 35, 36 and 37') has been full of accu- sations of frightful behaviour by Freddie Shepherd, chairman, and Douglas Hall, vice-chairman, of Newcastle United, Their taped comments have touched football to the quick. The two men resigned. What has caused so much hurt? Perhaps it is the pair's delight in what they see as the gullibility of the Newcastle fans: the fools will pay £50 for a shirt that costs £5 to produce. But the fans know that a replica shirt is an overpriced piece of junk. No football fan would pay such decent money for so ghastly a garment if it was an act of fashion-consciousness. But it is not. Buying a shirt from the club is an act of loyalty, wearing it is an act of love. To mis- take love for gullibility is perhaps the crassest error one human can possibly make about another.

Love is pretty resilient stuff. It can take setbacks in its stride; failure, frustration, disaster and disappointment. Love can sur- vive the wildest joys, the most abject mis- ery. But the one thing it cannot take is con- tempt, at the first sign of which it shrivels and dies like a butterfly in a blizzard.

Football fans love a club of which they are not members. They buy replica shirts because they want the club to have their money, money to spend on football and footballers, the spending of which will fos- ter and nurture their love and cause them to spend once again. Football is a closed feedback system of love.

The Newcastle bosses have knocked a hole in the precise mechanics of the engine of love. Love is escaping from leaky joints; meeting the outside air it changes into bile, anger, hatred. The revelations of the con- tempt of love affect Newcastle United, and all of football.