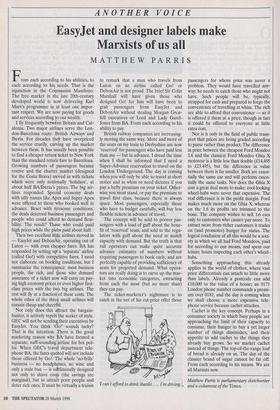 EasyJet and designer labels make Marxists of us all

I fly frequently between Britain and Cat- alonia. Two major airlines serve the Lon- don-Barcelona route: British Airways and Iberia. For decades they have overpriced the service cruelly, carving up the market between them. It has usually been possible to find a cheaper return ticket to New York than the standard return fare to Barcelona. Growing numbers of passengers became restive and the charter market (designed for the Costa Brava) moved in with tickets which were only notionally 'holidays', at about half BA/Iberia's prices. The big air- lines responded. Special economy deals with silly names like Apex and Super-Apex were offered to those who booked well in advance. Beset with tiresome conditions, the deals deterred business passengers and people who could afford to demand flexi- bility. The result? Those who could paid high prices while the plebs paid about half. . Then two excellent little airlines moved in — EasyJet and DebonAir, operating out of Luton — with even cheaper fares. BA has responded by setting up a 'separate' airline (called Go!) with competitive fares. I need not elaborate on booking conditions, but I summarise the consequence: most business people, the rich, and those who demand assurance of a ticket now will carry on pay- ing high economy prices or even higher first- class prices with the two big airlines. The rest will fly at a fraction of these costs. The whole ethos of the three small airlines will remain cheap and cheerful.

Not only does this attract the bargain- hunter, it actively repels the seeker of style. GEC will not be sending their executives by EasyJet. You think 'Go!' sounds tacky? That is the intention. There is the good marketing reason why BA have formed a separate, naff-sounding airline for hoi pol- loi. When GEC's travel department tele- phone BA, the fares quoted will not include those offered by Go!. The whole 'no-frills' business — no headphones, no wine and only a stale bun — is subliminally designed not only to shave costs (the savings are marginal), but to attract poor people and deter rich ones. It must be virtually a truism to remark that a man who travels from Luton on an airline called Go! or DebonAir is not proud. The brief Sir Colin Marshall will have given those who designed Go! for him will have been to grab passengers from EasyJet and DebonAir without stealing Morgan Gren- fell executives or Lord and Lady Garel- Jones from BA. From each according to his ability to pay.

British railway companies are increasing- ly moving the same way. More and more of the seats on my train to Derbyshire are now `reserved' for passengers who have paid less than me — but in advance. I dread the time when I shall be informed that I need a Super-Advance reservation to travel on the London Underground. The day is coming when you will only be able to travel at short notice and as whim or need dictates if you pay a hefty premium on your ticket. Other- wise you must stand, or pay the premium to travel first class, because there is always space. Most passengers, especially those who have to budget carefully, will buy less flexible tickets in advance of travel.

The concept will be sold to poorer pas- sengers with a load of guff about the bene- fit of 'reserved' seats, and sold to the regu- lators with guff about the need to match capacity with demand. But the truth is that rail operators can make quite accurate advance estimates of numbers without requiring passengers to book early, and are perfectly capable of providing sufficiency of seats for projected demand. What opera- tors are really doing is to carve up the mar- ket into economic categories, extracting from each the most (but no more than) they can pay.

The ticket-marketer's nightmare is to catch in the net of his cut-price offer those 'I can't afford to drink thanks . . I'm driving. passengers for whom price was never a problem. They would have travelled any- way; he needs to catch those who might not have. Such people will be, typically, strapped for cash and prepared to forgo the convenience of travelling at whim. The rich are able to afford that convenience — so it is offered it them at a price, though in fact it could be offered to everyone at little extra cost.

Nor is it only in the field of public trans- port that prices are being graded according to purse rather than product. The difference in price between the cheapest Ford Mondeo 1.6 and the classiest Ford Mondeo Ghia X motorcar is a little less than double (£14,495 to £23.495), but the difference in value between them is far smaller. Both are essen- tially the same car and will perform essen- tially the same tasks. Nor does the Ghia X cost a great deal more to make: cool-looking wheel-hubs were never that expensive. The real difference is in the profit margin. Ford makes much more on the Ghia X, whereas on the 1.6 its profits are trimmed to the bone. The company wishes to sell 1.6 cars only to customers who cannot pay more. To extract more from richer customers it trades on (and promotes) hunger for status. The logical conclusion of all this would be a soci- ety in which we all had Ford Mondeos, paid for according to our means, and spent our leisure hours inspecting each other's wheel- hubs.

Something approaching this already applies in the world of clothes, where vast price differentials can attach to little more than labels. Already a postcode can add £10,000 to the value of a house; an 0171 London phone number commands a premi- um over 0181; and the day is coming when we shall choose a more expensive tele- phone service because cachet attaches.

Cachet is the key concept. Perhaps in a consumer society in which busy people are approaching the limit of their capacity to consume, their hunger to buy a yet larger number of things diminishes, and their appetite to add cachet to the things they already buy grows. So we market cachet instead of things. The top-of-the-range loaf of bread is already on us. The day of the classier brand of sugar cannot be far off. From each according to his means. We are all Marxists now.