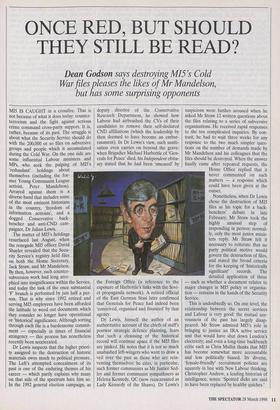 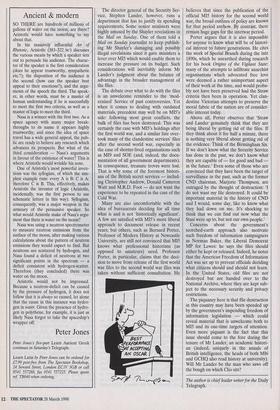 ONCE RED, BUT SHOULD THEY STILL BE READ?

War files pleases the likes of Mr Mandelson, but has some surprising opponents

MI5 IS CAUGHT in a crossfire. That is not because of what it does today: counter- terrorism and the fight against serious crime command cross-party support. It is, rather, because of its past. The struggle is about what the Security Service should do with the 200,000 or so files on subversive groups and people which it accumulated during the Cold War. On the one side are some influential Labour ministers and MPs, who seek the pulping of MI5's `redundant' holdings about themselves (including the for- mer Young Communist League activist, Peter Mandelson). Arrayed against them is a diverse band that includes some of the most eminent historians in the country, 'freedom of information activists', and a dogged Conservative back- bencher and anti-CND cam- paigner, Dr Julian Lewis.

The matter of MI5's holdings resurfaced last August, when the renegade MI5 officer David Shayler revealed that the Secu- rity Service's registry held files on both the Home Secretary, Jack Straw, and Mr Mandelson. By then, however, such counter- subversion work had long atro- phied into insignificance within the Service, and today the task of the once substantial `F' branch is performed by just half a per- son. That is why since 1992 retired and serving MI5 employees have been afforded the latitude to weed out documents which they consider no longer have operational or 'historical' significance. Although sorting through each file is a burdensome commit- ment — especially in times of financial stringency — this process has nonetheless recently been accelerated.

Dr Lewis suspects that the higher priori- ty assigned to the destruction of historic materials owes much to political pressure. The Left's attempted concealment of its past is one of the enduring themes of his career — which partly explains why many on that side of the spectrum hate him so. In the 1992 general election campaign, as deputy director of the Conservative Research Department, he showed how Labour had airbrushed the CVs of their candidates to remove their self-declared CND affiliations (which the leadership by then deemed to have become an embar- rassment). In Dr Lewis's view, such saniti- sation even carries on beyond the grave: when Brigadier Michael Harbottle of 'Gen- erals for Peace' died, his Independent obitu- ary stated that he had been 'smeared' by the Foreign Office (a reference to the exposure of Harbottle's links with the Sovi- et propaganda network). A retired official of the East German Stasi later confirmed that Generals for Peace had indeed been `conceived, organised and financed' by that agency.

Dr Lewis, himself the author of an authoritative account of the chiefs of staff's postwar strategic defence planning, fears that such a cleansing of the historical record will continue apace if the MI5 files are junked. He notes that it is not so much unabashed left-wingers who want to draw a veil over the past as those who are rein- venting themselves: he cites, in particular, such former communists as Mr Justice Sed- ley and former communist sympathisers as Helena Kennedy, QC (now reincarnated as Lady Kennedy of the Shaws). Dr Lewis's suspicions were further aroused when he asked Mr Straw 12 written questions about the files relating to a series of subversive organisations. He received rapid responses to the ten complicated inquiries. By con- trast, he had to wait three weeks for any response to the two much simpler ques- tions on the number of demands made by Mr Mandelson and his colleagues that the files should be destroyed. When the answer finally came after repeated requests, the Home Office replied that it never commented on such matters — a response which could have been given at the outset.

Nonetheless, when Dr Lewis chose the destruction of MI5 files as his topic for a back- benchers' debate in late February, Mr Straw took the highly unusual step of responding in person: normal- ly, only the most junior minis- ters reply. Mr Straw felt it necessary to reiterate that no party political motive would govern the destruction of files, and stated the broad criteria for the keeping of 'historically significant' records. The detailed application of these — such as whether a document relates to major changes in MI5 policy or organisa- tion — remains in the hands of the Security Service.

This is undoubtedly so. On one level, the relationship between the secret services and Labour is very good: the mutual ner- vousness of the past has largely disap- peared. Mr Straw admired MI5's role in bringing to justice an IRA active service unit that would have shut down London's electricity; and even a long-time backbench critic such as Chris Mullin thinks that MI5 has become somewhat more accountable and less politically biased. Its diverse, `female-friendly' recruitment policies are squarely in line with New Labour thinking. Christopher Andrew, a leading historian of intelligence, notes: 'Spotted dicks are said to have been replaced by healthy quiches.' The director general of the Security Ser- vice, Stephen Lander, however, runs a department that has to justify its spending requirements. Some senior ministers were highly amused by the Shayler revelations in the Mail on Sunday. One of them told a Mail on Sunday journalist to keep publish- ing Mr Shayler's damaging and possibly illegal revelations since it gave ministers a lever over MI5 which would enable them to increase the pressure on its budget. Such considerations will inevitably inform Mr Lander's judgment about the balance of advantage in the broader management of the files.

The debate over what to do with the files is an unwelcome reminder to the 'mod- ernised' Service of past controversies. Yet when it comes to dealing with outdated materials, precedent may well be on MI5's side: following most great conflicts, the bulk of files has been destroyed. This was certainly the case with MI5's holdings after the first world war, and a similar fate over- took many of the clandestine services' files after the second world war, especially in the case of shorter-lived organisations such as MI9 and SOE (and, indeed, the docu- mentation of all government departments). In consequence, treasure troves were lost. That is why some of the foremost histori- ans of the British secret services — includ- ing Christopher Andrew, Donald Cameron Watt and M.R.D. Foot — do not want the experience to be repeated in the case of the Cold War.

Many are also uncomfortable with the idea of bureaucrats deciding for all time what is and is not 'historically significant'. A few are satisfied with MI5's more liberal approach to document release in recent years; but others, such as Bernard Porter, Professor of Modern History at Newcastle University, are still not convinced that MI5 knows what professional historians (as opposed to amateurs) need. Professor Porter, in particular, claims that the deci- sion to move from release of the first world war files to the second world war files was taken without sufficient consultation. He believes that since the publication of the official MI5 history for the second world war, the broad outlines of policy are known for that period anyhow. By contrast, there remain huge gaps for the interwar period.

Porter argues that it is also impossible for anyone to know what will be of histori- cal interest to future generations. He cites the work of Special Branch during the late 1890s, which he unearthed during research for his book Origins of the Vigilant State: many of the attempts to infiltrate anarchist organisations which advocated free love were deemed a rather unimportant aspect of their work at the time, and would proba- bly not have been preserved had the Straw criteria then been in operation. Yet clan- destine Victorian attempts to preserve the moral fabric of the nation are of consider- able interest today.

Above all, Porter observes that 'Straw and Lander genuinely think that they are being liberal by getting rid of the files. If they think about it for half a minute, there is nothing very liberal about getting rid of the evidence. Think of the Birmingham Six. If we don't know what the Security Service has done in the past, we don't know what they are capable of — for good and bad in the future.' Even some of those who are convinced that they have been the target of surveillance in the past, such as the former CND chairman, Marjorie Thompson, are outraged by the thought of destruction: 'I do not want my file destroyed. It could be important material in the history of CND and I would, some day, like to know what they had down on me. It's shocking to think that we can find out now what the Stasi were up to, but not our own people.'

Concerns about the government's scorched-earth approach also motivate such freedom of information campaigners as Norman Baker, the Liberal Democrat MP for Lewes: he says the files should either be kept or released. Indeed, he notes that the American Freedom of Information Act was set up to prevent officials deciding what citizens should and should not learn. In the United States, old files are not destroyed but are handed over to the National Archive, where they are kept sub- ject to the necessary security and privacy restrictions.

The piquancy here is that file destruction in this country may have been speeded up by the government's impending freedom of information legislation — which could reveal material that is unwelcome both to MI5 and its one-time targets of attention. Even more piquant is the fact that this issue should come to the fore during the tenure of Mr Lander, an academic histori- an (indeed, uniquely in the annals of British intelligence, the heads of both MI6 and GCHQ also read history at university). Will Mr Lander be the man who saws off the bough on which Clio sits?

The author is chief leader writer for the Daily Telegraph.