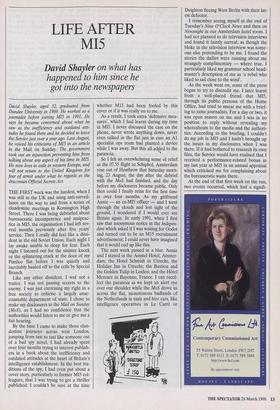 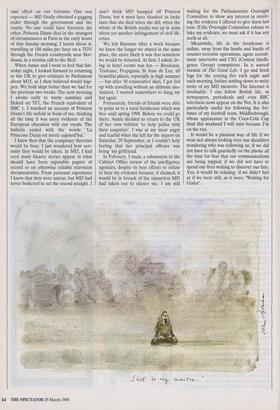 David Shayler on what has

happened to him since he got into the newspapers

David Shayler, aged 32, graduated from Dundee University in 1989. He worked as a journalist before joining MI5 in 1991. He says he became concerned about what he saw as the inefficiency and outdated atti- tudes he found there and he decided to leave the Service just over a year ago. Last August, he voiced his criticisms of MIS in an article in the Mail on Sunday. The government took out an injunction preventing him from talking about any aspect of his time in MI5. He now lives in exile in western Europe, and will not return to the United Kingdom for fear of arrest under what he regards as the draconian Official Secrets Act.

THE FIRST week was the hardest, when I was still in the UK and using anti-surveil- lance on the way to and from a series of clandestine meetings in Kensington High Street. There I was being debriefed about bureaucratic incompetence and malprac- tice in MI5, the organisation I had left sev- eral months previously after five years' service. Then I really did feel like a dissi- dent in the old Soviet Union. Each night I lay awake unable to sleep for fear. Each night I listened out for the sinister knock or the splintering crack at the door of my Pimlico flat before I was quietly and inevitably hauled off to the cells by Special Branch.

Like any other dissident, I wag not a traitor. I was not passing secrets to the enemy. I was just exercising my right in a free society to criticise a largely unac- countable department of state. I chose to make my disclosures to the Mail on Sunday (MoS), as I had no confidence that the authorities would listen to me or give me a fair hearing.

By the time I came to make those clan- destine journeys across west London, jumping from taxi to taxi like someone out of a bad spy novel, I had already spent over four months trying to interest publish- ers in a book about the inefficiency and outdated attitudes at the heart of Britain's intelligence establishment. In the best tra- ditions of the spy, I had even put about a cover story, particularly to former MI5 col- leagues, that I was trying to get a thriller published. I couldn't be sure at the time whether M15 had been fooled by this cover or if it was really on to me.

As a result, I took extra 'defensive mea- sures', which I had learnt during my time in MI5. I never discussed the case on the phone, never wrote anything down, never even talked in the flat just in case an Al specialist ops team had planted a device while I was away. But this all added to the paranoia.

So I felt an overwhelming sense of relief as the 07.55 flight to Schiphol, Amsterdam rose out of Heathrow that Saturday morn- ing, 23 August, the day after the debrief with the MoS had finished, and the day before my disclosures became public. Only then could I finally relax for the first time in over four months. As my girlfriend Annie — an ex-MIS officer — and I went through the clouds and lost sight of the ground, I wondered if I would ever see Britain again. In early 1991, when I first saw that anonymous notice in the Indepen- dent which asked if I was waiting for Godot and turned out to be an M15 recruitment advertisement, I could never have imagined that it would end up like this.

The next week passed in a blur. Annie and I stayed in the Amstel Hotel, Amster- dam; the Hotel Schmidt in Utrecht; the Holiday Inn in Utrecht; the Bastion and the Golden Tulip in Leiden; and the Hotel Mercure in Bayonne, France. I can recol- lect the paranoia as we kept an alert eye over our shoulder while the MoS drove us across the flat, monotonous badlands of the Netherlands in taxis and hire cars, like intelligence operatives in Le Cane or Deighton fleeing West Berlin with their lat- est defector.

I remember seeing myself at the end of Tuesday's Nine O'Clock News and then on Newsnight in our Amsterdam hotel room. I had not planned to do television interviews and found it faintly surreal, as though the bloke in the television interview was some- one else pretending to be me. I found the stories the dailies were running about me strangely complimentary — where true. I particularly liked my grammar school head- master's description of me as 'a rebel who liked to sail close to the wind'.

As the week went on, some of the press began to try to discredit me. I later learnt from a well-placed friend that MI5, through its public persona of the Home Office, had tried to smear me with a brief- ing to tame journalists. For a day or two, it was open season on me and I was in no position to reply without revealing my whereabouts to the media and the authori- ties. According to the briefing, I couldn't do my job in MI5 and I hadn't brought up the issues in my disclosures when I was there. If it had bothered to research its own files, the Service would have realised that I received a performance-related bonus in my last year at MI5 in an annual appraisal which criticised me for complaining about the bureaucratic waste there.

At the end of that first week on the run, two events occurred, which had a signifi- cant effect on our fortunes. One was expected — MI5 finally obtained a gagging order through the government and the courts. No one could have foreseen the other. Princess Diana died in the strangest of circumstances in Paris in the early hours of that Sunday morning. I learnt about it, travelling at 186 miles per hour on a TGV through the French countryside near Bor- deaux, in a routine call to the MoS.

When Annie and I went to bed that Sat- urday night, I looked forward to returning to the UK to give evidence to Parliament about M15, as I then believed would hap- pen. We both slept better than we had for the previous two weeks. The next morning I awoke early to warm sunshine and flicked on TF1, the French equivalent of BBC 1. I watched an account of Princess Diana's life unfold in front of me, thinking all the time it was more evidence of the European obsession with our royals. The bulletin ended with the words: `La Princesse Diana est morte aujourd'hui.'

I knew then that the conspiracy theorists would be busy. I just wondered how seri- ously they would be taken. In MI5, I had seen many bizarre stories appear in what should have been reputable papers of record or on otherwise reliable television documentaries. From personal experience I know that they were untrue, but MI5 had never bothered to set the record straight. I don't think MI5 bumped off Princess Diana, but it must have thanked its lucky stars that she died when she did, when the whole of the British media was up in arms about yet another infringement of civil lib- erties.

We left Bayonne after a week because we knew the longer we stayed in the same place, the more likely it was that somehow we would be detected. At first, I admit, liv- ing in hotel rooms was fun — Bordeaux, Toulouse, Perpignan, St Jean de Luz, all beautiful places, especially in high summer — but after 30 consecutive days, I got fed up with travelling without an ultimate des- tination. I wanted somewhere to hang my hat again.

Fortunately, friends of friends were able to point us to a rural farmhouse which was free until spring 1998. Before we could go there, Annie decided to return to the UK of her own volition 'to help police with their enquiries'. I was at my most angry and tearful when she left for the airport on Saturday, 20 September, as I couldn't help feeling that her principal offence was being my girlfriend.

In February, I made a submission to the Cabinet Office review of the intelligence agencies, despite its best efforts to refuse to hear my evidence because, it claimed, it would be in breach of the injunction MI5 had taken out to silence me. I am still waiting for the Parliamentary Oversight Committee to show any interest in receiv- ing the evidence I offered to give them last year. If the Oversight Committee refuses to take my evidence, we must ask if it has any teeth at all.

Meanwhile, life in the farmhouse is sedate, away from the hustle and bustle of counter-terrorist operations, agent recruit- ment interviews and CIG (Central Intelli- gence Group) committees. In a surreal version of The Good Life, I go and fetch logs for the roaring fire each night and each morning, before settling down to write more of my MI5 memoirs. The Internet is invaluable. I can follow British life, as newspapers, periodicals and even BBC television news appear on the Net. It is also particularly useful for following the for- tunes of my football team, Middlesbrough, whose appearance in the Coca-Cola Cup final this weekend I will miss because I'm on the run.