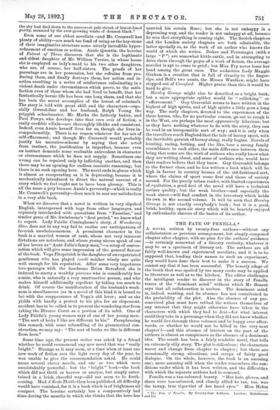 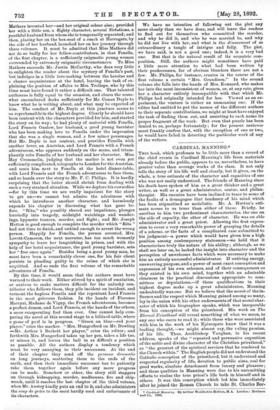 THE FATE OF FENELLA.*

A NOVEL written by twenty-four authors—without any collaboration or previous arrangement, but simply composed chapter after chapter, with no plan for the authors' guidance —is certainly somewhat of a literary curiosity, whatever it may be as a specimen of literary art. The authors are all fairly well-known and experienced novelists ; and it is to be supposed that, lending their names to such an experiment, they would have done their best to make it a success. We cannot say that it has been successful. The homely adage of the broth that was spoiled by too many cooks may be applied to literature as well as to the kitchen. The editor challenges the intelligent reader to discover in the story of Fenella traces of the "dominant mind" without which Mr. Besant says that all collaboration is useless. The dominant mind is, indeed, wanting, and its absence has not contributed to the probability of the plot. Also the absence of any pre- conceived plan must have robbed the writers themselves of any interest that they might otherwise have taken in the characters with which they had to deal—for what interest could they take in a personage when they did not know whether he would live through three volumes and be happy ever after- wards, or whether he would not be killed in the very next chapter P—and this absence of interest on the part of the authors is almost as conspicuous as the absence of a dominant idea. The result has been a fairly readable novel, that tells an extremely silly story. The plot is ridiculous ; the characters waver and change from chapter to chapter ; but there are occasionally strong situations, and scraps of fairly good dialogue. On the whole, however, the book is an amusing one ; more amusing still when the reader remembers the con- ditions under which it has been written, and the difficulties with which the separate authors had to contend.

Fenella was a tan-coloured beauty. "Her hair, gloves, and shoes were tan-coloured, and closely allied to tan, too, was the tawny, true tiger-tint of her hazel eyes." Miss Helen

* The Fate of Fenella. By Twenty-four Authors. London : Hutchinson and Co.

Mathers invented her—and her original colour also; provided her with a little son, a flighty character, several flirtations, a youthful husband from whom she is temporarily separated; and then, placing her on the box-seat of a coach at Harrogate, by the side of her husband, launched her on her journey through three volumes. It must be admitted that Miss Mathers did not do so badly for her fellow-contributors, in that Fenella, of the first chapter, is a sufficiently enigmatic young woman surrounded by extremely enigmatic circumstances. To Miss Mathers succeeds Mr. Justin McCarthy, who does very little to enlighten the reader about the mystery of Fenella's past, but indulges in a little love-making between the heroine and a chance acquaintance at the hotel, leaving the task of ex- plaining the position of affairs to Mrs. Trollope, who by this time must have found it rather a difficult one. That talented authoress is fully equal to the occasion, and clears the some- what encumbered decks sufficiently for Mr. Conan Doyle to know what he is writing about, and what may be expected of him. The conduct of Mr. Doyle at this juncture seems to us reprehensible in the highest degree. Clearly he should have been content with the characters provided for him, and started the story on its way; he had plenty of material with Fenella, Lord Francis Onalow, her husband, a good young barrister who has been making love to Fenella under the impression that she was a single woman, and a few minor personages. But Mr. Doyle is not content, and provides Fenella with another lover, an Austrian, and Lord Francis with a French adventuress, who appears suddenly on the scene, and trium- phantly robs Fenella of her husband and her character. Miss May Crommelin, judging that the matter is not even yet sufficiently complicated, telegraphs to London for the Austrian, and seats him next to Fenella at the hotel dinner-table, with Lord Francis and the French adventuress to face them, and so bands over the story to Mr. F. C. Philips. It is hardly surprising that the latter should shrink from dealing with such a very strained situation. While we deplore his cowardice —for by this time we are really impatient for the story to get on—we cannot but admire the adroitness with which he introduces another character, and harmlessly expends his chapter in discussing what has gone be- fore. "Rita," who possibly shared our impatience, plunges hurriedly into tragedy, midnight watchings and wander- ings, hypnotic trances, murder, and flight; and Mr. Joseph Hatton is good enough to complete the murder which "Rita" had not time to finish, and unkind enough to arrest the wrong person. Happily for Fenella, the person arrested, Mrs. Lovett-Cameron, the next narrator, has too much womanly sympathy to leave her languishing in prison, and with the help of her hotel acquaintance, the good young barrister, sets her "free once again." Besides being a good young man, he must have been a remarkably clever one, for his fair client persists in pleading guilty to the crime of which she is acquitted. And so ends the first volume of the remarkable adventures of Fenella.

By this time, it would seem that the authors must have warmed to their work. Either stirred by a spirit of emulation, or anxious to make matters difficult for the unlucky con- tributor who follows them, they pile incident on incident, and torment the hapless Fenella and the repentant Lord Francis in the most grievous fashion. In the hands of Florence Marryat, Madame de Vigny, the French adventuress, becomes a perfect demon, and Lord Francis, at the hands of the others, a more exasperating fool than ever. One cannot help com- paring the novel at this second stage to a billiard-table, where a game of pool is in progress. "Green on blue—red your player," cries the marker. "Mrs. Hungerford on Mr. Dowling —Mr. Arthur h, Beckett her player," cries the editor; and forthwith Mrs. Hungerford takes up her pen, takes a life too, or misses it, and leaves the ball in as difficult a position as possible. All the authors display a tendency which must be very annoying to their successors. At the end of their chapter they send off the persona dramatis on long journeys, scattering them to the ends of the earth, and then their immediate successor has to patiently rake them together again before any more progress can be made. Somehow or other, the story still staggers on through kidnapping, murder, madhouses, fire and ship- wreck, until it reaches the last chapter of the third volume, when Mr. Anstey kindly puts an end to it, and also administers the coup de grace to the most hardly used and unfortunate of its characters. We have no intention of following out the plot any more closely than we have done, and will leave the readers to find out for themselves who committed the murder, and why he did it, and who he was married to, and why he did not live with her, and what is the denouement of so extraordinary a tangle of intrigue and folly. The plot, we have said, is not a good one; indeed, it is a very bad one. But that is the natural result of its eccentric com- position. Still, the authors might sometimes have paid a little more attention to what had been written by their predecessors, for of obvious blunders there are not a few. Mr. Philips, for instance, creates in the course of the first volume a certain "Mrs. Grandison." In the second volume she falls into the hands of Mrs. Kennard, who makes her into the most inconsistent of women, or, at any rate, gives her a character entirely incompatible with that which Mr. Philips had originally intended for her. Viewed as an ex- periment, the venture is rather an unmeaning one. If the editor had omitted to put the names of the different authors to their separate contributions, we might at least have enjoyed the task of finding them out, and assorting to each name its proper fragment of the work. But even that puzzle has been denied to us, perhaps fortunately ; for the present reviewer must frankly confess that, with the exception of one or two, he would have failed in detecting the particular work of any of the writers.