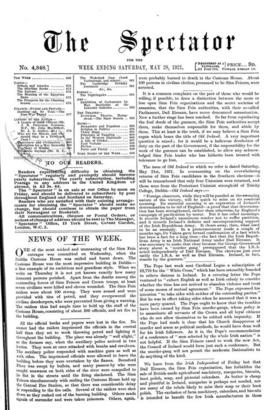 The issue of Old Ireland to which we refer is

dated Saturday, May 21st, 1921. In commenting on the overwhelming returns of Slim Fein candidates in the Southern elections—it will be remembered that only four Unionists were returned, and those were from the Protestant Unionist stronghold of Trinity College, Dublin—Old Ireland says :— "Foreign observers, while they will be puzzled at the sweeping nature of the victory, will be quick to seize on its essential meaning. Its essential meaning is an expression of Ireland's determination to be rid of England—a proof that that determina- tion has been strengthened, rather than otherwise, by England's campaign of pacification by terror. But it has other meanings. It records Ireland's unanimous resolve not to suffer partition, and it records Ireland's definite and uncompromising support of the Irish Republican Army. It clears away, then, what used to be an anomaly. In a pronouncement made a couple of months ago, De Valera gave formal confirmation of a fact which has been a fact for a long time—the fact that the Irish Repub- lican Army is an Irish National Army under Dail Eireann. It was necessary to make that clear because the George-Greenwood story about a • murder gang' presupposed that the I.R.A. acted independently of Dail Eireann. The elections just over ratify the I.R.A. as well as Dail Eireann. Ireland, in fact, stands by the gunmen."