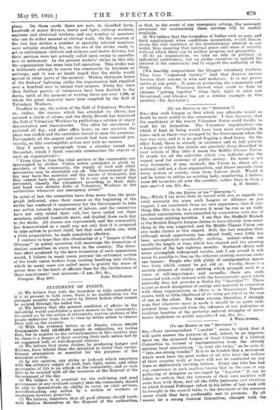 Sru,—While I am more than in accord with you as regards the vital necessity for some such League or Alliance as you suggest, I am convinced, from my own experience, that if any- thing like this is to be a success it must be run as an inde- pendent organization, untrammelled by association with any of

the various existing societies. I see that the Sheffield Branch of the British Empire League claims to have already done some- thing in the way suggested, and the Middle Classes Union can also make claims in this regard. Still, the fact remains that, although much opportunity has offered itself, very little has been accomplished—practically nothing, indeed—when one recalls the length of time which has elapsed and the pressing necessities of the last eighteen months. Scattered efforts will never accomplish widespread results, and I am afraid it will never be possible to line up the different existing societies under one banner. People who talk glibly of amalgamation ignore two facts which cannot be got rid of. Firstly, there is a certain element of rivalry existing which prompts each to a sense of self-importance; and secondly, there are staffs connected with each imbued with the bureaucratic spirit which assuredly does not provoke a desire for " hari-kiri"! There is just as much dissipation of energy and material in connexion with these organizations as there is in Government Depart- ments, with as little likelihood of its being got rid of in the case of one as the other. For these reasons, therefore, I strongly urge that whatever move is made it should be on quite inde- pendent lines, removed from the influence of any jealousies or rivalries begotten of the perfectly natural struggles of move- ments depandent on public support.—I am, Sir, &c.,