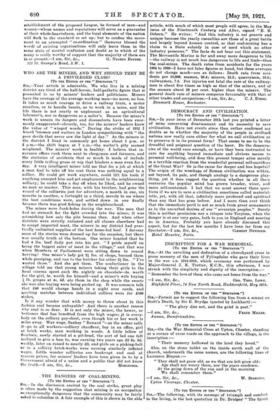 WHO ARE THE MINERS, AND WHY SHOULD THEY BE A

PRIVILEGED CLASS? [To THE EDITOR OF THE "SPECTATOR."]

Sut,—Your article is admirable. We who live in a mining district are tired of the half-heroic, half-pathetic figure that is presented to us by miners' leaders and politicians. Miners have the courage of the average working man—no more, no less. It takes as much courage to drive a railway train, a motor omnibus, or to handle beasts, as to work in a mine, and the life there is not nearly so unpleasant as an agricultural labourer's, nor so dangerous as a sailor's. Because the miner's work is unseen its dangers and discomforts have been enor- mouly exaggerated—cleverly, too, for the miners' leaders know the value of "winged words." During the strike of 1912 I heard 'busmen and waiters in London sympathizing with "the poor devils that never saw the light of day." As the miners in the district I lived in commonly got home about 1 p.m. or 2 p.m.—the shift began at 7 a.m.—the waiter's pity seemed misplaced. The miners' work is healthy. I believe that in- surance offices rank them next to clergymen and farmers, and the statistics of accidents that so much is made of include every little trifling graze or nip that hinders a man even for a day. A very intelligent miner told me that for a job at which a man had to take off his coat there was nothing equal to a collier. He could get work anywhere, could lift his tools if anything annoyed him and get employment in the neighbouring colliery; he could take a day off when he liked, and he owned no man as master. This man, with his brother, had gone the round of the collieries just for adventure, a month in one, six months in another, a fortnight in a third, merely to see where the best conditions were, and settled down in one finally because there was good fishing in the neighbourhood.

The mines were funk-holes during the war. The men that had no stomach for the fight crowded into the mines; it was astonishing how safe the pits became then. And when other districts were strictly rationed and all classes elsewhere had to accept imported meat, the miners in my district had prac- tically unlimited supplies of the best home-fed beef. I daresay some of the stories were dressed up for the occasion, but there was usually truth at the bottom. One miner boasted that he had 4 lbs. beef daily put into his pot. "I pride myself on being the biggest eater of meat in the village," and that was when Members of Parliament were sitting down to soused herring! One miner's lady got 21 lbs. of chops, burned them while gossiping, and ran to the butcher for other 21 lbs. " I've wasted those." And she got them. The confectioner in the village told me that young miners taking their girls to the local cinema spent each 10s. nightly on chocolate—U, worth for the girl, 5s. worth for himself—and a miner's wife buying 1 lb. grapes at 4s. 6d. ate them in the shop while the sweets she was also buying were being packed up. It was common talk that £40 would change hands in a night over cards, and 'milting matches between individual colliers were for £100 stakes, Is it any wonder that with money to throw about in this fashion coal became unbuyable? And there is another reason why coal is so dear. It is not only the miner, the hewer, or bottomer that has benefited from the high wages; it is every- body on the colliery pay-sheet, even though his or her work is miles away. War wage, Sankey "Reward "—as the miner calls it—go to all workers—colliery chauffeur, boy in an office, girl at brick works, man working in woods. A little fellow of fourteen, newly started at a pit-head, the sort of lad one felt inclined to give a bun to, was earning two years ago £2 8s. 8d. weekly, later on raised to nearly 23, and girls on a picking-belt or in a colliery brick-works were earning similarly inflated wages. Little wonder collieries are bankrupt and coal at ransom prices, for miners' leaders have been given in to by a Government afraid of a union and a public that did not know