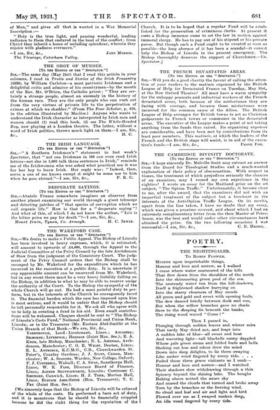 (To THE EDITOR OF THE "SPECTATOR."] SIR,—Will you do a good charity the favour of calling the atten- tion of your readers to the matinee organized by the British League of Help for Devastated France on Tuesday, May 31st, at the New Oxford Theatre? All must have a warm sympathy for the unhappy peasants and industrial workers of the French devastated areas, both because of the misfortunes they are facing with courage, and because these misfortunes were incurred for the common cause of the Allies. The British League of Help arranges for British towns to act as Christian godparents to French towns or communes in the devastated areas. The executive of the League makes a point of not taking anything from the funds thus raised. Its organizing expenses are considerable, and have been met by contributions from its least poor members. This matinee, at which the leaders of the French and the British stage will assist, is in aid of the execu-