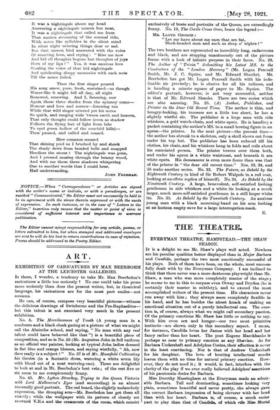 EXHIBITION OF CARICATURES BY MAX BEERBOHM AT THE LEICESTER GALLERIES.

Is there, I wonder, a tendency to take Mr. Max Beerbohm's caricatures a little too seriously ? No one could take his prose more seriously than does the present writer, but, in theatrical language, his oaricatures are for the most part smiles—not screams.

He can, of course, compose very beautiful pictures—witness the delicious drawings of Swinburne and the Pre-Raphaelites— but this talent is not exercised very much in the present exhibition.

No. 5. The Mercilessness of Youth (A young man in a sombrero and a black cloak gazing at a pioture of what wemight call the Absinthe school, and saying, "No man with any real talent ()mid have behaved like that ") is a beautiful piece of composition, and so is No. 55 (Mr. Augustus John in full uniform as an official war painter, looking at typical John ladies dressed in flat blue and orange blouses, and saying wistfully, " Ah, now there really is a subject ! " No. 57 is of Mr. Maseffek/ Cultivating his Garden (in a fantastic dress, watering a white arum lily with blood out of a neat watering-can). These are delightful to look at and in Mr. Beerbohm's best vein ; of the rest five or six seem to me conspicuously funny.

No. 45. Mr. Lytton Strachey, Trying to See Queen Victoria with Lord Melbourne's Eyes (and succeeding) is an almost uncannily good portrait. The red beard, the slightly-melancholy expression, the drooping arm—Mr. Beerbohm has gat them all exactly; whila the wallpaper with its pattern of closely set crowned V.R.s and the ornaments of the room, which consist exelusively of busts and portraits of the Queen, are exceedingly funny. No. 19, The Cecils Cross Over, bears the legend :—

"Let me have about me men that are fat, Sleek-headed men and such as sleep o' nights "

The two brothers are represented as incredibly long, cadaverous and black, and are stepping unanimously out of the picture frame with a look of infinite purpose in their faces. No. 26. The Author of "Trivia" Submitting his Latest MS. to the Conductors of the "London Mercury" (Mr. Logan Pearsall Smith, Mr. J. C. Squire, and Mr. Edward Shanks). Mr. Beerbohm has got Mr. Logan Pearsall Smith with his inde- finable air precisely; he is elusive for all his tallness, and is handing a minute square of paper to Mr. Squire. The editor's portrait, however, is not very successful, neither is that of Mr. Edward Shanks. There are two series which are also amusing. No. 25. (A) Author, Publisher, and Printer in the Dear Old Recent Time. The author is thin, and hungry-looking, his trousers are a little too short, he has a slightly wistful air. The publisher is a huge man with side whiskers, a gold wateh-chain, and white spats. He is handing a packet containing the author's MS. to a small bowing figure in an apron—the printer. In the next picture—the present time— the author has shrunk to a skeleton, only a skull shows out from under his top hat. The publisher has been reduced till his clothes, his chain, and his whiskers hang in folds and coils about his emaciated person. The printer towers over them both, and under his apron is a white waistcoat, and beneath it are white spats. His demeanour is even more fierce than was that of the printer in "the dear old recent time." Nos. 33, 34, and 35 make another series. No. 83. The Future, as Beheld by the Eighteenth Century (a kind of Sir Robert Walpole in a red coat, looking at an effete replica of himself). No.'34. As Beheld by the Nineteenth Century. A large, benevolent, self-satisfied looking gentleman in aide whiskers and a white tie 'looking at a much larger, much more self-satisfied gentleman in a still larger white tie. No. 35. Aa Beheld by the Twentieth Century. An anxious young man with a black mourning-band on his arm looking at an horizon empty save for a large interrogation mark.